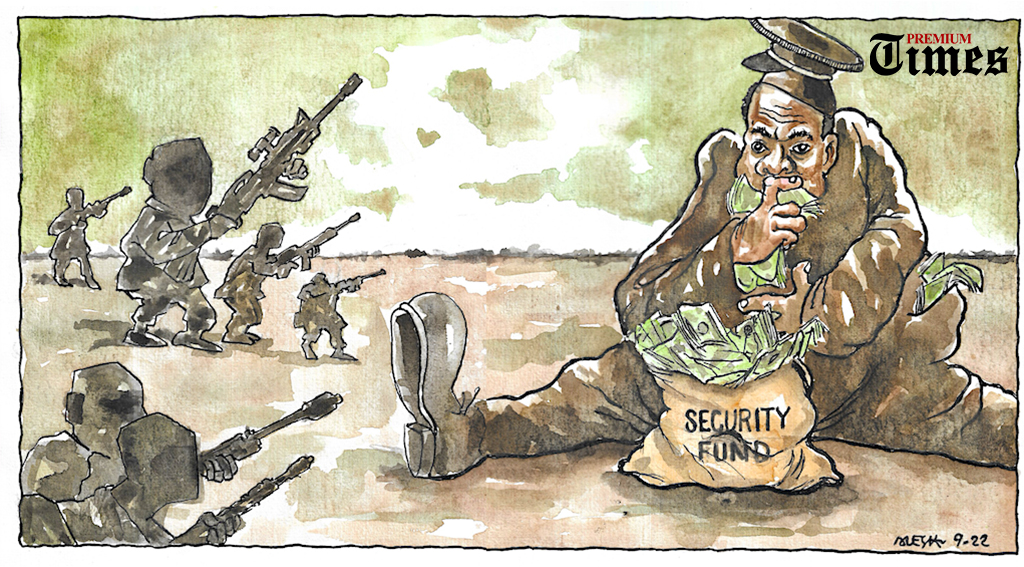 PREMIUM TIMES believes that treating security funds as booty, as it appears to be customary today, will persist until opacity in spending is removed.

A national policy dialogue on corruption and insecurity in Nigeria recently organised by the Independent Corrupt Practices and Other Related Offences Commission (ICPC), exhumed what does not regrettably command national attention. Funds for national security are brazenly stolen in the country by security top brass, contractors and bureaucrats. This is against the backdrop of the clamour for adequate funding of security agencies amidst rising security challenges that have resulted in wanton killings, kidnappings and maiming of thousands of citizens by non-state actors.

The convener of the dialogue and Chairman, ICPC, Professor Bolaji Owasanoye, bemoaned the fact that the Police Trust Fund, set up just three years ago, specifically in 2019, by an Act of Parliament, is aggressively being raided by denizens of public corruption in high places, thereby undermining government’s effort to retool or reposition the Force. In the 2021 budget, N74 billion was provided for the PTF and meant for training and retraining of police personnel. But this objective is about to be derailed if the abusers are not effectively checkmated. It is for this reason that PREMIUM TIMES views the “investigation for abuse, fund diversion, questionable welfare packaging that is not for the police who are the beneficiaries of the fund and sundry corrupt practices” by the ICPC as most salutary.

The Nigeria Police Force is totally dysfunctional, compelling the Federal Government to shift its statutory responsibilities to the military. Professionally, this is damaging as the military have been over-stretched in the 36 states of the federation. It is most disturbing that some elite cohorts want this status quo to continue. Therefore, the ICPC inquest should be thorough, open and conclusive; and those with questions to answer must be made to speak up in accordance with the law.

The malfeasance is not only in the police, it cuts across other security services. A former service chief embezzled N4 billion from the military budget, which he deposited into the accounts of two companies he is a beneficial owner of and sole signatory to, with which he bought properties in the name of cronies and proxies. Already, ICPC has recovered N220 million from the N1billion civil servants in a line ministry transferred to four shell companies; funds meant for special operations. The Economic and Financial Crimes Commission (EFCC) had recovered N2.4 billion and $156 million from an ex-service chief, as testified by a prosecution witness, Tosin Owobo, in a Federal High Court trial in March 2018. The wife of the said officer coughed up N382 million.

It will also be recalled that a former Chief of Defence Staff, Alex Badeh, was tried for alleged theft of N3.97 billion as the Chief of Air Staff but the trial was struck out following his sudden death in 2019. Before then, a prosecution witness had told the court, how he stole N558 million monthly from the payroll, converted it to dollars and pocketed this.

We have also learnt how $2.1 billion set aside for arms procurement was allegedly shared to apparatchiks of a political party through 78 companies, during the Goodluck Jonathan administration. The Centre for Democracy and Development (CDD) estimates that about $15 billion has been squandered in the last 20 years through compromised arms procurement deals.

Incidences like these explain why non-state actors like Boko Haram, Islamic State of West African Province, bandits and kidnappers wield weapons superior to those our security operatives’ possess. Thus, Nigeria has emerged as the second most terrorised country after Iraq, according to the 2022 half-year report of the Global and International Terrorism Research/Analysis group. On several occasions, bandits, insurgents or separatist agitators have sacked police stations, military locations and communities with their superior firepower without any resistance.

There are reports of security personnel on the frontlines in the North-east confirming the sophisticated nature of arms and ammunition the insurgents carry. In some instances, the state operatives wilted or took to their heels during combat with them. This was evident in the ISWAP invasion of Kuje Medium security prison in July, during which 888 inmates were freed, among them 64 Boko Haram members. Public fury arising from this was why the House of Representatives Committees on Internal Affairs and Security, probing the incident recently, sought to know from the Minister of Internal Affairs, Rauf Aregbesola, the calibre of arms at the disposal of the 65 security personnel at the facility during the attack. He could not specify, preferring to speak only on camera.

It is a no-brainer that ill-equipped cops and military personnel shy away from battle, just as they are in bad mood when their welfare provisions and allowances are trifled with. Periodically, the armed services experience this unacceptable behaviour, not necessarily because funds are not available, but because corrupt senior officers often divert security funds into their private pockets. About 480 police constables in Osogbo, Osun State, recently protested with placards over the non-payment of their salaries for 18 months. These are young cops who completed their training in May 2021. We recall also that in July 2018, the non-payment of allowances of mobile police personnel for six months in Maiduguri sparked street protests and gunshots, in an area under siege by Boko Haram.

The Federal Government has spent over N6 trillion on security in the last 11 years, much of it by the Muhammadu Buhari regime. Yet, the impact is not being felt sufficiently. We note however that in the North-east lately, Boko Haram and ISWAP forces are facing crippling aerial bombardments from Tucano jets. The government should be conscious of the correlation between the massive theft of security funds and insurgency, carnage and kidnappings ravaging the country. Kaduna State government has reported that information at its disposal revealed that 645 persons were killed in the first half of this year. In 2021, over 1,192 Nigerians died from banditry and terrorism across the country, one estimate stated. Government has to make the increase in defence budgets to N874 billion in 2020 and N840 billion in 2021 count.

Buhari’s National Security Adviser, Babagana Monguno should be up and doing. His March 2021 BBC Hausa Service leak that funds meant for arms procurement “are nowhere to be found… and the newly appointed Service Chiefs have declared that they have not seen the weapons” exposed gaping holes in the procurement process. Is there nobody in charge? There should be clear fiscal and administrative templates for the spending of security funds if accountability is to reign. The EFCC and ICPC should redouble their efforts in making security personnel or bureaucrats who turn security funds they administer into their private pockets pay dearly for the abuse of public trust. A breach of trust in these circumstances gives armour to insurgents and gunmen, which undermines the very essence of any government – the protection of lives and property.

PREMIUM TIMES believes that treating security funds as booty, as it appears to be customary today, will persist until opacity in spending is removed and oversight of the funds enthroned in the system. The plea-bargaining policy through which parts of looted funds are recovered and the looters are left with the rest should be jettisoned. It does not serve as a good enough deterrent! These morally bankrupt public officials whose actions lead to Nigeria having ill-equipped and badly motivated fighting forces and who by extension bear responsibility for the mass killings of Nigerians, deserve to be properly investigated and sanctioned.

The anti-graft agencies, therefore, must be empowered to perform their duties untrammelled. The Nuhu Ribadu-led EFCC was enamoured of this liberty to nab a sitting Inspector-General of Police, Tafa Balogun, and try and convict him in a N5.7 billion official corruption. This type of action, we believe, is the path to sanity.

We the Obidiots, Zombidients and Zombidiots: This is our story, By Owi