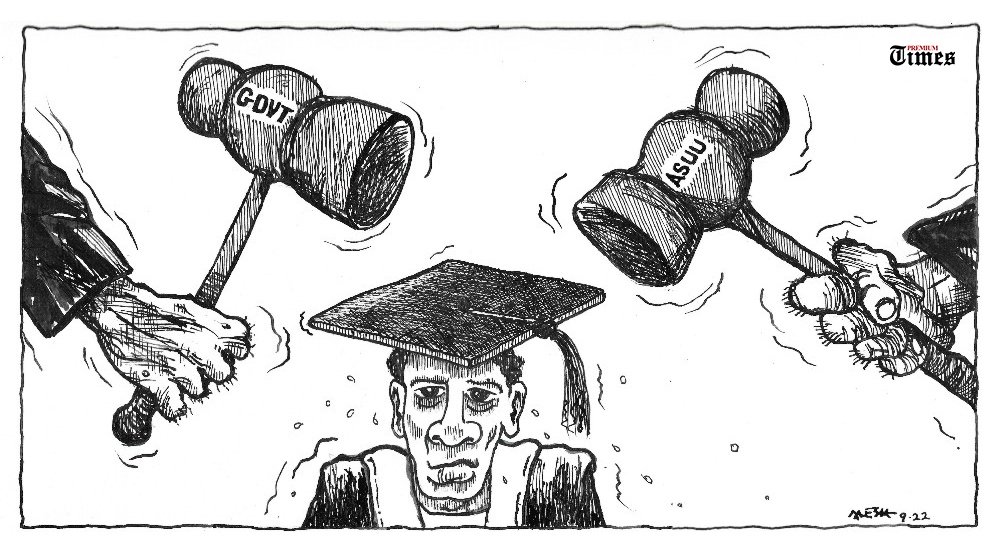 Any ASUU insistence on a public funding arrangement that has woefully failed over the years is tantamount to preparing the ground for the next strike.

The ongoing strike by lecturers in public universities, which began on 14 February, took a turn for the worse when their umbrella body, the Academic Staff Union of Universities (ASUU) declared it total and indefinite on 29 August. A series of meetings between the Union and the Federal Government to resolve the impasse had always ended in a fiasco largely because sincerity and realism did not underpin those engagements.

At issue is a charter of demands by ASUU, pursuant to the implementation of a 2009 Agreement with the government regarding the proper funding of universities. Government’s breach of the pact resulted in its renegotiation in 2013. Three successive committees headed by Wale Babalakin, Munzali Jibril and Nimi Briggs were appointed by government. All failed to resolve the crisis. The Federal Government has been roundly criticised, and rightly so, for not honouring the pacts it reached with ASUU; and for creating more universities it is not prepared to fund adequately.

Specifically, ASUU wants the Federal Government to pay N200 billion annually as a revitalisation fund for five years; adopt the University Transparency and Accountability Solution (UTAS), a payment platform it says is unique to its system, as against the use of the Integrated Payroll and Personnel Information System (IPPIS); pay arrears of Earned Academic Allowances of about N284 billion; and significantly increase the salaries of its members. A modicum of progress appeared to have been in the offing two weeks ago when ASUU took government’s offers to their respective local branches for critical evaluation and possible approval. However, the union back-pedalled, with government’s insistence on “no work, no pay” for the six months the strike has lasted. Nigeria has 108 public universities, of which 49 are federally-owned, 59 owned by states while 111 others belong to private entities.

All are agreed that our universities as citadels of teaching, learning, research and innovation are travesties of models in other parts of the world. Their rock-bottom positions in global university rankings speak volumes. Infrastructural decay, in terms of ill-equipped libraries and laboratories; shortage of classrooms and students’ hostels (most of which are insanitary); dearth of skilled manpower; paucity of research funds; irregular electricity and water supply; and mismanagement of resources offer a panoramic view of the negligence and irresponsibility of government in its obligations to these universities. The outlined deficiencies are contained in the 2012 Needs Assessment of Universities report. One media tally recently indicated that ASUU has been on strike for five calendar years since 1999; the longest period being 270 days of the 2020 strike. 180 days were lost in 2003 and 150 days in 1999.

The Emmanuel Osodeke-led ASUU has been in the trenches since its formation in 1978. The decadence above triggered the brain-drain that began in the late 1980s. Students have also joined the exodus to the point that 65,929 Nigerians were studying in the United Kingdom as recently as June this year, according to the UK Home Office National Statistics report. This ranks Nigeria as the third largest nationality, after China and India, with students in the UK system. Interestingly, this does not come cheap. In the US too, Nigeria ranks among the top 10 globally, and first in Africa, out of the 914,000 foreign students which Open Door Report on International Educational Exchange, documented in 2021, as released by the US Embassy. Thousands of Nigeria are also studying in Benin Republic, Ghana, South Africa, Canada, Malaysia, Egypt, India, Cyprus, and Ukraine (until the outbreak of war).

With the six-month strike, it is crunch time once again for all the stakeholders in the Nigerian education sector to put heads together towards finding a solution to this problem. The crises over the years underscore the fact that alternative funding options need to be explored for the universities to function optimally. Students should be made to pay an agreeable range of fees to augment government’s grants. The addition of endowments, money from consultancy services, gifts and donations, normally make up the financial pool of universities.

Unfortunately, ASUU is opposed to students paying fees. The position vitiates the potency of its logic or desire for a revitalisation of the system. In real terms, there is nothing like “free education” anywhere. Where it exists as a public policy, the bill is picked up somehow by corporate bodies and individuals who pay heavy taxes to government, which ultimately defrays the cost.

Even in advanced democracies where free college education movements are cradled, like in the US, due to liberal and progressive politics, ostensibly to deal with inequality and decline in investment in public good, it has not been a smooth sail. Largely, students still pay for their education. But government mitigates the burden by setting up loan portfolios for students and scholarships for brilliant and/or indigent ones. Beneficiaries of such credit pay back on a progressive scale when they start working upon graduation. A former US President, Barack Obama, liquidated his student loan only during his presidency. President Biden has just cancelled about $244 billion students’ debts, in which about 20 million people got a relief of $10,000 each.

In the UK too, the populist policy ended in 1998 when reforms introduced modest fees. According to Brookings Institution, two decades later, most public universities in England charged about £9,250 per annum. But before then, decline in these institutions had set in; just as the universities operated with government’s caps on enrolment in order to reduce per student expenditure. Absolute dependence on public financing brought them under pressure, which also infringed on their autonomy.

Autonomy, the much-cherished self-governance instrument of universities, gives them power or freedom to establish a set of rules and capacity to control their own affairs. ASUU, in exploiting the University Autonomy 2004 Act, has accused the government of tampering with the independence of universities, with the attempt to impose the controversial IPPIS payment system on them. They may be right. ASUU cannot have it both ways on autonomy – it insists government should be the sole funder of universities but should have no say on how it operates, including the payments platform for salaries. University Councils need to take substantive decisions on addressing the crisis in our universities and, specifically, address the question of alternative sources of funds.

Any ASUU insistence on a public funding arrangement that has woefully failed over the years is tantamount to preparing the ground for the next strike. A former Vice-Chancellor of Federal University of Technology, Minna, between 2002 and 2007, Hamman Tukur Sa’ad, in his reaction to the ongoing strike, pointed the way forward. He deviated from the “no fees from students” norm during his tenure. A situation where students paid N90 per session for a bed space and rented it out at N15,000 to their colleagues, robbed the university of valuable resources. During his time as Vice Chancellor, he had introduced a fee of N50,000 per student, and also a range of charges that transformed the university to the delight of parents and the students, who subsequently urged his successor to sustain that trajectory. “When ASUU insists that no contribution should come from parents and students to run a university, let them visit our permanent site at FUTMIN,” Prof. Sa’ad said. As other universities were steeped in perennial darkness, the university had a dedicated power line from the Shororo substation at the cost of N50 million. Prof Sa’ad’s revelation that a university hid a whopping N10 billion from the knowledge of a Federal Government’s visitation panel he chaired, says a lot about how corruption and lack of transparency have ruined the ivory tower.

As critical as the paucity of funds might have contributed to the rupture of the university system in Nigeria, incompetent and corrupt administrators have undoubtedly done much worse. This is why Peter Okebukola, a former Executive Secretary, National Universities Commission (NUC), noted a few years ago that “Universities need to be in the hands of managers who can run the institutions efficiently and prudentially manage resources.” Inept leadership and corruption were behind the one million illegal admissions that the Joint Admission and Matriculation Board (JAMB) discovered in March this year. The beneficiaries had already graduated.

In 2016, the NUC indicted 37 universities for running 150 illegal courses. Admissions beyond the carrying capacity of any university have corrosive effects on infrastructure and the quality of degrees awarded. In fact, there is enough blame to go around. Establishing more universities should stop, whether public or private, as they draw from the same pool of human resources, already adjudged to be inadequate. Both the government and ASUU should critically reflect on their positions and find a common ground in the interest of the students and the country.

Commitment to earlier agreements must be respected by the Federal Government. The bid for improved wages for lecturers should be treated with a sense of urgency. There is dignity in intellectual labour. That a professor earns less than $1,000 a month is a national embarrassment we should end.