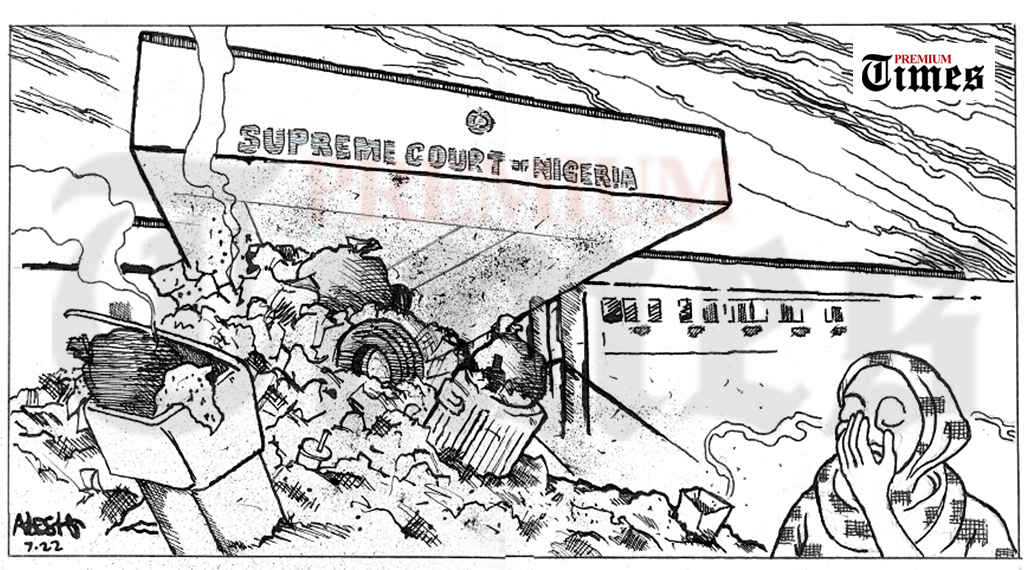 "We should not miss this rare opportunity to clean the apex court, and to initiate far-reaching reforms that would redeem the entire judiciary from self-immolation."

Ibrahim Tanko Mohammad’s three-year tenure as Chief Justice of Nigeria (CJN), ended abruptly on June 27 when he resigned. The exit was as dramatic as his assumption of office in 2019, when he replaced Justice Walter Onnoghen in controversial circumstances. Justice Olukayode Ariwoola, the next in line, was immediately sworn in by President Muhammadu Buhari, as his successor, in an acting capacity. Although the official reason for Justice Mohammad’s sudden departure was ill-health, it is widely believed that the damning letter of protest by 14 Justices of the Supreme Court, forced him into throwing in the towel.

The aggrieved justices raised allegations that bordered on impropriety and gross incompetence. To close observers of judicial development, their action was akin to a revolt, the first of its kind in the annals of the apex court. While the ex-CJN was appalled by their outburst, in his reply he emphasised that any perceived deficit in his reign should be blamed on dire fiscal challenges and accused his fellow justices of dancing naked in the market square. “Judges in other climes are to be seen and not heard”, he had charged, but we differ in this regard!

With the catalogue of misgivings by the justices, it can be strongly argued that they actually acted in the public interest. These include the shortage of accommodation and vehicles; inadequate diesel supply to their residences; and irregular electricity supply to the courts/offices that reduced the hours of work; irregular and underfunded overseas training workshops and lack of legal aides, whereas Justice Mohammad is claimed to have undertaken similar trips with the full complement of his personal staff and even family. The justices were rightly baffled by the fact that all this happened despite the upward review of budgetary allocation to the court. It rose from N110 billion in 2021 to N120 billion in 2022. Another damaging accusation was that the erstwhile CJN failed for three years to assent to the rules of court, which manacled the apex court from the speedy dispensation of justice. In the words of the justices, this particular development was the “peak of degeneration of the Court… the height of decadence and clear evidence of the absence of probity and moral rectitude.”

It is sad that the integrity of a CJN has once again become an issue of national concern. Mohammad’s predecessor, Onnoghen suffered a similar fate, leading to his prosecution and conviction by the Code of Conduct Tribunal on a six-count charge of corruption, dodgy asset declaration and operating foreign currency accounts. It should be recalled too that the late CJN Aloysius Katsina-Alu’s tenure was blighted by the infamy of hijacking a Governorship Petition before the Sokoto branch of the Court of Appeal in 2011. The President of the Court of Appeal, Ayo Salami, who refused to be used for the dirty job, questioned Katsina-Alu’s constitutional powers to do so. For daring him, the CJN got the National Judicial Council (NJC), which he led, to suspend Justice Salami, who ultimately lost his job. Not surprisingly, the NJC was dead silent on the matter. Instructively, 19 out of the 23-member Council are appointees of the CJN, with awesome powers to investigate and discipline errant members of the Bench, among other functions.

It is good that this time there will be an inquest on the performance of a CJN. We should not miss this rare opportunity to clean the apex court, and to initiate far-reaching reforms that would redeem the entire judiciary from self-immolation. A Bench enmeshed in the cesspool of corruption forebodes evil for the society. This odious situation is the reason why practice directions of courts are not complied with, reckless ex parte orders are granted andinterlocutory injunctions imposed indiscriminately, while forum-shopping and other abuses also plague judicial proceedings.

Also, going by concerns expressed by insiders on how some judges are appointed to the hallowed chambers, the situation calls for serious scrutiny. This point was raised by a former CJN, Mariam Aloma-Muhktar, on her retirement in 2014, when she decried what she labelled as the “rising culture” of the influence of lobbying, favouritism and godfatherism in judicial appointments, instead of being merit-driven. The practice undermines justice and promotes indiscipline.

Caught in this labyrinth of infamy, how to make the NJC an effective watchdog of the Bench and the entire judiciary is an urgent task that must be addressed. One such way is to design a template that can checkmate an errant CJN. It is impossible for an NJC that the CJN exercises dominant power over, to play this role. Apart from the NJC, the CJN also chairs the Federal Judicial Service Commission, the Legal Practitioners’ Privileges Committee and the board of the National Judicial Institute. A former Chairman, National Human Rights Commission, Chidi Odinkalu, observed that these positions with powers, budgets and prerogatives, transform the CJN “from a judicial figure into a biological portal for contracts, preferment and patronage.” Rather than being treated as a peer, he stressed, the CJN has become a principality to be worshipped by his colleagues. This is not ideal.

An NJC not alive to its responsibilities indirectly encourages rampant corruption by judges. Insult is added to injury whenever they are caught, as they only get a slap on the wrist in the name of punishment, and are largely allowed to keep their ill-gotten wealth. The late Supreme Court Justice Kayode Eso’s concern over “billionaire judges” created by bribery from election petitions, still echoes in this regard. Justice Salami had equally lamented the despicable conduct of retired senior jurists who were “bribing or intimidating judges” under the guise of legal consultancy, while Femi Falana (SAN) once raised the alarm that our courts had become “supermarkets where only the rich do their shopping.” Although, aformer CJN, Mahmud Mohammed, revealed in 2016 that 64 Judges “were disciplined as appropriate” between 2009 and 2014, he did not grant Nigerians the benefit of knowing the details of their misconduct. The NJC merely retired a judge caught meeting an election petitioner three times and demanding a bribe of N200 million to procure judgement for him at the Court of Appeal sitting in Owerri, Imo State.

A judiciary wallowing in lawlessness loses public confidence. Globally, the position of a judge is magisterial, and only for a caste of people of distinction – those with integrity, honour and high intellect. These values influence their conduct and judgement. However, such cherished values are undermined by cases of the unabashed display of esprit de corps in courts by judges presiding over cases that involve their peers. They are also undermined when cases get dismissed through curious legal technicalities. In this kind of situation, it is not surprising that no corrupt judge is in jail despite the avalanche of evidence of their gross misconduct. Yet, when a corrupt judge is let off the hook, it lays a corrosive foundation for moral decadence in the society. This evil and reactionary impulse in the temple of justice must therefore stop.

In other jurisdictions, the norm is different. According to Richard Pilger, “Corruption in a judge’s seat does not go unpunished.” Pilger was the prosecutor in the case against a New York State Supreme Court Justice, Thomas Spargo, who was convicted in 2009 for attempted extortion and bribery. He was jailed 27 months. The prosecutor told the presiding judge that “without a legal system free of impropriety, nothing works.” He was spot on. In Britain, the trial of part-time judge, Constance Briscoe took a similar trajectory. She was sentenced to 16 months in prison in 2014 after being found guilty of lying to the police who investigated speeding points scandal involving a former British Secretary of State for Energy and Climate Change, Chris Huhne, and his former wife, Vicky Pryce. In his sentencing, the judge, Baker, said, Constance’s “considered respect for the law was for others.” Yes, no sane society has two castes of citizens: one for whom the law is made, and the other who are above the law.

Ridding the Nigerian judiciary of this ugly development requires that all hands should be on deck. This is why it is heartwarming and highly welcome that several interest groups including the Nigeria Bar Association, the Body of Benchers, civil society organisations and the Senate, have all waded into the crisis at the apex court.

A common warning is that a matter should not be swept under the carpet to avoid a repeat. For this reason, PREMIUM TIMES endorses the suggestion by the Chairman, Body of benchers, Wole Olanipekun (SAN), that the NJC and FJSC should be overhauled to bring in independent people to perform the functions of the two bodies. The NBA President, Olumide Apata, in also calling for reform, emphasised its holistic nature, in order to change the all-time low public confidence in the judiciary and the legal profession. We do agree thatany attempt to narrow the crisis to a ‘cash matter’, will be tantamount to trifling with the issue. The President of the Senate, Ahmad Lawan, therefore adopted the right approach when in his directive to the Senate Justice Committee, set to probe the crisis, advised it to look beyond the cash matrix.

The position of the Centre for Democracy and Development that “the process of appointment of judicial officers, from the lowest levels right up to the CJN has become politicised, integrity and competence are no longer core criteria in the selection process” lends further credence to our demand for an all-encompassing probe and overhaul of the judiciary. A crucial step in this direction is for Nigeria to rise above this debacle by adopting best practices from other jurisdictions like Australia, Canada and Kenya, which have broad based approaches in selecting judges. We call on Acting Chief Justice Olukayode Ariwoola to play his part in ensuring that the probe, overhaul and reform that we have enumerated here come into fruition. Obviously, he would need to avoid the banana peel to accomplish the task. In short, history lies before Justice Ariwoola and PREMIUM TIMES hopes his conduct would make that history to be kind to him.

With Ariwoola now in the saddle, and being the leader of the seemingly rebellious justices, all eyes are on him to see how he would make the difference. It is not just in the affairs of the SC, but in the entire chain of justice delivery system in the country. Both lawyers and judges have found a way to render ineffective, the much-applauded Administration of Criminal Justice Act, meant to enhance speedy dispensation of justice. The new CJN is not oblivious of this fact. A confirmation from one his bosses will suffice: a former CJN, Mahmud Mohammed, when quizzed on delay in justice delivery by the Senate during his confirmation hearing in 2016, said, “The problem is with us. We don’t want cases to finish quickly.” As such, Ariwoola is facing an integrity test in all of this. He can ill-afford to fail .

Why has our leadership been so unworthy of us?, By Uddin Ifeanyi

Hypocrisy and the dysfunctional world order, By Omoluabi Dele