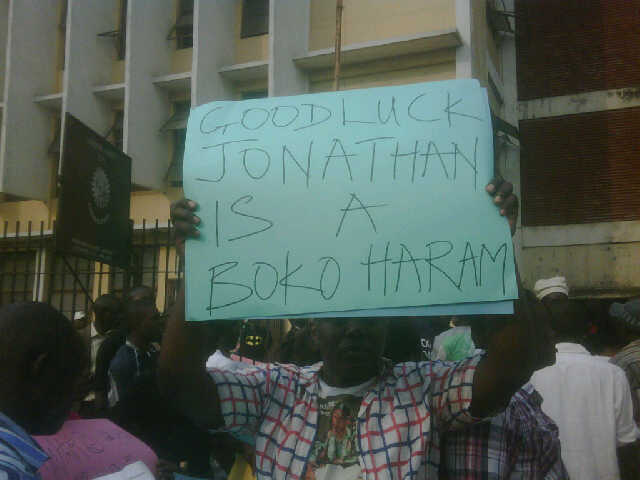 Premium Times Editorial: Removal of Fuel Subsidy A Coup Against Civility and Democracy

Exactly one week after the dastardly attack against Christians and security targets on Christmas Day, killing scores of innocent Nigerians, the government of President Goodluck Jonathan itself, in blatant disrespect to an already depressive national mood, goes ahead to further violate the sullen national feelings through his sweeping increase in the pump price of petroleum products.

It was a most cynical New Year’s Day gift to the nation that no one asked for, and which, the president ought to be better advised not to have made. In effect, what Mr. Jonathan has done, an obviously illegal act in itself, was to sneak behind his parliament, abandon the façade of his neatly choreographed but obviously fit-only-for-television whirlwind consultations, and execute a coup of sorts, by announcing the price increase from 65 Naira a litre to 143 Naira a litre.

Two days after, in a classic case of putting the cart before the horse, a trademark of this administration, and clearly in display of another cynical public relations move, Mr. Jonathan announces a committee of eminent citizens, headed by the respectedChristopher Kolade, to manage the accruals from the “savings” from this bizarre policy misstep.

As many thoughtful Nigerians commented in the past weeks since Mr. Jonathan and his overzealous economic team members commenced their showy public sale of this illogical policy proposal, the whole question of a “subsidy” on domestic petroleum products in the first place is more of a reality in the minds of the government people than a rational economic proposition.

However, as no one appeared able to cure the administration of its driven commitment to slap punishing fuel prices on the most poor and vulnerable in our communities, we have left matters in the believe that he would at least respect the democratic process enough, and allow the National Assembly do its own job of ultimately blessing his proposal.

We were all wrong, and we ought to have known as a matter of fact. When Mr. Jonathan took a major bite off the national revenue pie to deposit for the Sovereign Wealth Fund, his only consideration was what mattered. He merely put a personal conviction above a national consensus, as indeed above a lawful process, by ignoring and disdainfully shelving the National Assembly aside. Again when he went ahead to launch the so-called new National Driver’s licence programme, in clear violation of the constitution, and even when the matter was still before a competent court of law, what mattered merely was Mr. Jonathan’s personal preferences.

The joke therefore is on the Chairman, Senate Committee on Information, Media and Public Affairs, Senator Enyinnaya Abaribe, a famous ally of the president himself, who said on Tuesday night, in Abuja, that Mr. Jonathan’s current abuse of constitutional processes could only be carried out when the 2012 Appropriation Bill, currently before the National Assembly, has been considered and a final decision taken.

Thus, Mr. Abaribe’s concerns that the increase in petroleum price “must take full cognizance of the general mood of the people and what will be of utmost economic benefit to the country” ignore the important fact that for Mr. Jonathan, his personal preferences come first before the demands of the law, and of the process that gives democracy its coherence.

Yet we would be naïve to say it was unclear as to why the president took his outrageously disrespectful step against his citizens on this matter. Unable to get any tangible national support for his proposal, not from labour, youths, civil society, religious organizations, and not from the feelers he is getting from parliament, Mr. Jonathan reached out for the manual on how to force policies in a democracy by subverting the democratic process. In other words, he reached out for the Bonapartist principle of drawing a bayonet against the democratic order. Simply put: he staged a coup against his own people.

It is truly pathetic that the stentorian temper, which lingers in our post-military democratic environment is finding, perhaps, its most elaborate flourish, under a president who is presumably the most lettered, and, by his own recent self acclamation, the most reflective. Tellingly too, in Mr. Jonathan, ideology has found a resounding trampoline over, cold, rational, and one may dare say, nationalistic, political, and economic discourse.

In sum, we would want to state the facts for the attention of Mr. Jonathan and his economic team members, that their chosen step will trigger an economic devastation in the land and a social turmoil that they deliberately created. It will be stretching gullibility too far to also say they are unmindful that this policy amounts to a massive transfer of public assets from the poorest of Nigerians to an oil cabal the government comically vilifies but ultimately rewards.