What is being bandied in the social media platforms now, which comprise fake and misleading information, can only destroy instead of consolidating Nigeria’s democracy. 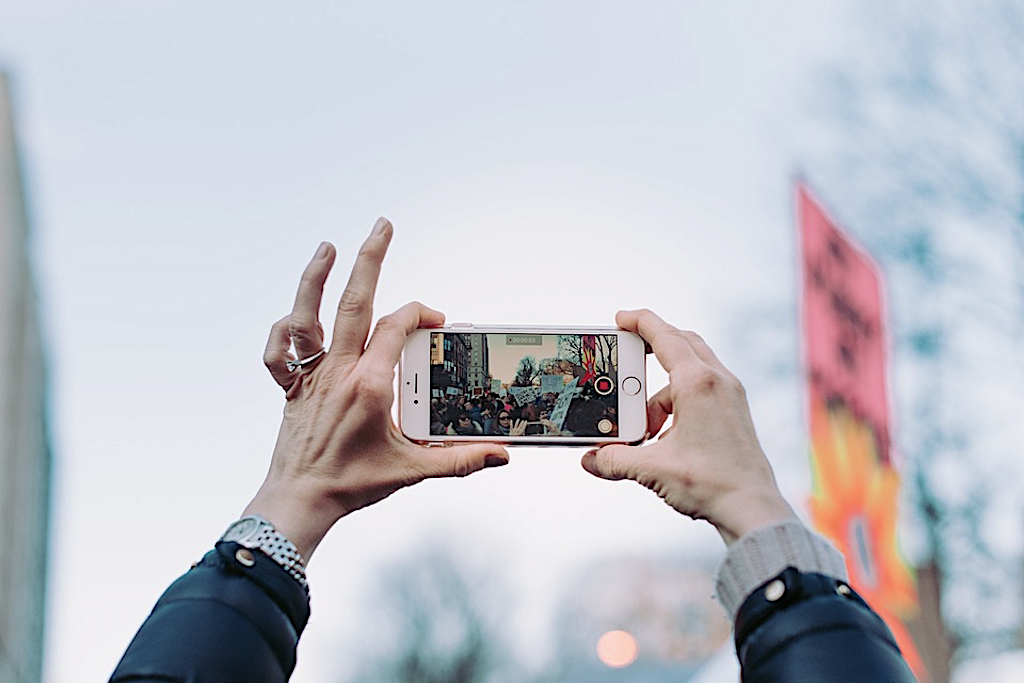 …citizen journalism has the capacity to contribute towards the consolidation of Nigeria’s democracy through meaningful information dissemination. But that can only happen on the basis of ethically-driven quality, truthfulness, objectivity and authenticity of such information… This is only possible if those involved in the trade deliberately undergo training on the rudiments of normative reporting or subject their passion to collaboration with the mainstream media.

Almost two centuries ago, a notable French writer, Alexis de Tocqueville offered a controversial description of the powers of the media in the elevation and sustenance of democracy.

Focusing on the American model, which had already reached maturity at that time, he observed that the press was in a marriage of mutual benefits with democracy.

He drew attention to the fact that the press caused “political life to circulate through all the parts of that vast territory (United States).” And that “Its eye is constantly open to detect the secret springs of political designs and to summon the leaders of all parties in turn to the bar of public opinion.”

He explained that based on his experiences and observations, the press “rallies the interests of the community round certain principles and draws up the creed of every party; for it affords a means of intercourse between those who hear and address each other without ever coming into immediate contact.”

Alexis’ perception, as enshrined in his analysis, was that the media wield so much powers that they do not only influence but they have the capacity to control politics and its key players and connect them to the people.

Perhaps at that time, Alexis was right. But between 183,5 when he wrote that piece, and today, the paradigm has shifted over and over. One of the inventions that must have created the shift is called citizen journalism.

Let’s explain that a little. In the 1830s, the press was controlled by those trained, not just in the classroom, but through the mill, to report the news, write analysis and influence the perception of the audience on critical issues.

That was a time journalism was practiced by journalists — those trained in the art and tested in the mill of the profession. It was at such a time that the press could set agenda for public discourse because the profession was socially responsible.

Journalists were made to think and behave as the conscience of the nation; such that whatever people read in the newspapers was regarded as the gospel truth because it was soaked and stewed in the acceptable ingredients of the profession.

Under such atmosphere, the consolidation of democracy as an alternative to authoritarianism was left in the hands of the media. Little wonder, that on 19 January, 1787, Thomas Jefferson, the man who authored the document for the Declaration of American Independence in 1776, while serving as America’s minister to France, made that historic and often-quoted statement.

History records that while in France, Jefferson, in a letter to his friend and political associate, Edward Carrington, declared that given an opportunity to choose between a government instead of newspapers or newspapers in place of government, he would surely opt for the newspapers.

That metaphorically-loaded statement confirmed the inherent powers of the mass media — and, of course, the newspaper was the only reigning mass medium at that time.

It was the media that consolidated democracy in the United States. This was when the press could be meaningfully referred to as the Fourth Estate of the Realm — that is, the unofficial but an extremely powerful participant in democracy.

There was a chain of events in the 1970s that accounted for further consolidation of American democracy. We still remember the man called Richard Milhous Nixon, the 37th president of the United States.

If journalism is a profession just as medical practice, engineering, architecture, nursing, or being a pilot, how acceptable would it be to have a carpenter walk into a hospital theatre ready to carry out a brain surgery, or a bricklayer jump into an aircraft’s cockpit, ready for a flight? This is what citizen journalists are doing to journalism.

On his watch, and to his knowledge, some Republican Party chieftains in his government arranged and supervised the invasion of the Democratic Party office on 8 August, 1972. Some of those involved were personal aides who worked closely with him in the White House. The invaders were promptly arrested and interrogated.

As it is with politicians everywhere, Nixon’s spin doctors, comprising political advisers, spokespersons, even some lawmakers, and other political jobbers, denied his involvement.

But the Washington Post newspaper refused to believe the stories. Bob Woodward and Carl Bernstein, mentored by the indefatigable Ben Bradlee — the editor — stayed on that story for more than two years.

Within this period, most of Nixon’s political appointees who masterminded the undemocratic act, were jailed. Others resigned in shame. Finally, the ugly incident caused Nixon to declare on 27 June, 1974, “I will resign the Presidency effective at noon tomorrow.” And he did.

The moral of this story is that democracy needs the media to live up to its name. Bradlee, in his autobiography observed that though Nixon hated the media, since the media made him unpopular, ironically, by his actions, he conferred unprecedented fame on the same media. He “gave the press its finest hour.”

Just imagine what would have happened to American democracy if such dictatorial act by the party in power was swept under the carpet by the media! However, the press was only able to hold the government accountable through undiluted display of professionalism, which meant that it operated within certain normative boundaries.

Let’s take a deep breathe and ask ourselves: In this era of social media-driven information dissemination — when journalism is practiced by quacks masquerading as professionals — how possible is it to consolidate or strengthen democracy in the manner described above? Almost impossible, because you cannot give what you do not have.

The next question is: Is there anything wrong with citizen journalism — that is, the so-called journalism practiced by people who are unschooled in the profession, people whose practices are not regulated by ethics? We can only answer this question with another question.

If journalism is a profession just as medical practice, engineering, architecture, nursing, or being a pilot, how acceptable would it be to have a carpenter walk into a hospital theatre ready to carry out a brain surgery, or a bricklayer jump into an aircraft’s cockpit, ready for a flight? This is what citizen journalists are doing to journalism.

In examining citizen journalism as an instrument for consolidation of democracy, we are trying to establish what aspects of that unprofessional practice can help our democracy to grow. In other words, we are indirectly asking for the advantages of citizen journalism in a democratic environment.

By the way, does this brand of information dissemination qualify to be called journalism? “It is a misnomer to call it journalism,” said Ray Ekpu at a journalism workshop in 2018. He noted that such writing lacks “the rigour, the professionalism, the ethical obligation, truth-telling and the fairness doctrine that journalism is infused with.”

No doubt, citizen journalism or so called, has helped spread information or democratise the process of information dissemination, which is good for democracy. Such information might be false, fake, misleading, purposely mischievous with pre-determined negative implications, but hardly is any information perfectly useless.

There is actually nothing new about citizen journalism except that in modern times, it is technologically-driven. For instance, on 22 November, 1963, the day American president, John F. Kennedy was assassinated, it was someone we can today describe as a citizen journalist who captured it on video.

If citizen journalism is about information dissemination that falls short of what news should be, how does that help in consolidating democracy? Democracy thrives on truth, balanced and objective reporting, which form the hallmark of journalism. Anything less is meant to destroy democracy.

It is still unclear how he did it. But Abraham Zapruder documented the bloody incident with his Bell and Howell camera. The video lasted only 26 seconds.

Born in present-day Ukraine, Zapruder was a tailor, not a journalist. He was simply trying to capture the president’s convoy when a bullet tore into the limousine and killed Kennedy.

Let’s be aware that if both Zapruder and Holliday were not at the scene of these incidents, those events would not have been recorded. So, do we clap for citizen journalism? Hold on a moment!

The truth is that what is called citizen journalism can only help consolidate democracy in Nigeria if there is a collaboration between it and the mainstream media. In other words, whatever information is gathered by the non-professionals should be subjected to normative assessment by the professionals.

For instance, in the two examples cited above, the recorded videos were handed over to the mainstream media for professional handling. But that has not been the case since the advent of internet technology and the creation of social media platforms.

With citizen journalism, the so-called reporter is also the publisher. He or she reports to nobody. There is no gatekeeping, there is no filtering process, there is no verification, there is no attempt to balance the story. They see it, they report it, they publish it, and life continues.

Some people have argued that the meeting point between the traditional and this new brand of writing is that both produce news. That is absolutely misleading. The reason is that, that thing called news can only be produced by people trained or skilled in the art and practice of journalism; not just anybody.

If citizen journalism is about information dissemination that falls short of what news should be, how does that help in consolidating democracy? Democracy thrives on truth, balanced and objective reporting, which form the hallmark of journalism. Anything less is meant to destroy democracy.

Let’s draw a line here, citizen journalism must not be confused with online newspapers owned and operated by core journalism professionals. An online newspaper is different from blogs created by self-proclaimed journalists, who are bent on publishing whatever will attract peoples’ attention.

Our conclusion is that what is called citizen journalism has the capacity to contribute towards the consolidation of Nigeria’s democracy through meaningful information dissemination. But that can only happen on the basis of ethically-driven quality, truthfulness, objectivity and authenticity of such information.

This is only possible if those involved in the trade deliberately undergo training on the rudiments of normative reporting or subject their passion to collaboration with the mainstream media.

Until then, what is being bandied in the social media platforms now, which comprise fake and misleading information, can only destroy instead of consolidating Nigeria’s democracy.

Sam Akpe is a journalist and editor, while Mercy Tartsea-Anshase lectures in Mass Communication at Bingham University, Karu.

Between Tinubu, Atiku – who is the unifier?, By Fredrick Nwabufo