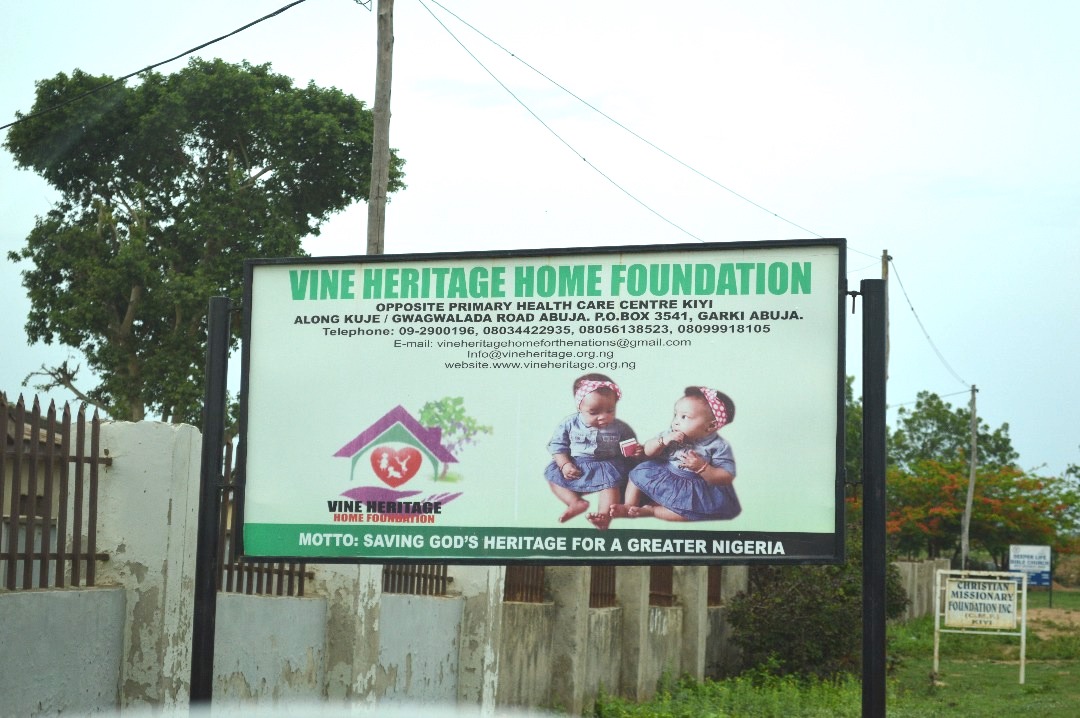 It was supposed to be a casual visit to an orphanage. But I didn’t bargain for the inspiring story of one man caring for many children, all alone. His effort has renewed my faith in humanity and the conviction that the good in us actually outweighs the work of bad people giving us a bad name… The children at Vine Heritage Home need interventions from well-meaning people and organisations to survive into adulthood. No one person has all the resources required. It takes the collective will of all to do this.

The story of the Nigerian child is replete with abandonment and the absence of parental care. From growing outside the caring hands of parents to missing out on healthcare and education, which are two critical human development indices, the Nigerian child has been largely left in the cold and at the mercy of the street.

Amidst the heart-wrenching story of abandonment comes a ray of hope in the messianic gesture of Vine Heritage Home. Call it a home, an orphanage or a humanitarian centre and you won’t be wrong. The Vine Heritage Home is an initiative of two individuals who are genuinely motivated to reverse the culture of abandonment and infanticide in Nigeria. Their story defines the lives of children nurtured at the centre over the years.

The Vine Heritage Centre currently has 175 children, among whom who are 22 sets of twins, with the youngest arriving the home just four days before our visit on Saturday, 12 November. They were frail and fragile, as you would expect. They joined 21 other sets of twins being fostered at the Home. Besides the multiple twins, there are 130 other children (aged 4 days to 17 years being cared for by the Home). Tucked away in a remote rural rusty settlement on the Gwagwalada-Kuje road, the home sits on a large expanse of land housing 175 of the 186 children of all ages and at different stages of their development.

Vine Heritage Home is a private charity home run by a couple, who in 18 years (2004) has dedicated their lives to bringing succour to not just twins, but other children set to be killed or abandoned before their intervention. Others were willingly brought to the centre by their parents or relatives, who could not provide for them for reasons of poverty, death and outright lack of interest in parental care. Here lies the extraordinary life journey of the Stevens and their immediate family in the search and discovery of the other side of our humanity.

The journey of discovery

Olusola Stevens  and his wife started out as church planters; to propagate and convert people to Christianity in rural communities. They soon ended up caring for tens of children after being confronted with the unexpected reality of the plight of abandoned children and infanticide engendered by some cultural practices.

As their work took them to the interior parts of the Federal Capital Territory, Nigeria, they learnt, unfortunately, of how twins were being killed to appease the gods because they were considered bad luck by their families. In no time, the Stevens shifted focus a bit, and added a new frontier to their earlier mission. They began to take in these kids for care outside of their original homes or from where they were abandoned.

“In about 70 communities around the Federal Capital Territory, twins were considered abominations, and were always abandoned and killed, while sacrifices were made to stop or cleanse the land of twins”, Olusola Stevens explained.

Twins were not just being killed, children whose mothers passed at childbirth were vulnerable too and the mode of killing them was akin to pure murder. “The children would be poisoned and those who lost their mothers were either killed or buried with their deceased mothers”, he found out.

A Mary Slessor comes to judgement

The story is told of how Mary Slessor, a missionary, stopped the killing of twins in Okoyong part of Calabar, because like the Abuja communities, they also considered twins as ‘evil or a curse’ at the time. However, this was supposedly before civilisation. But in little known communities around Nigeria’s capital, this heinous crime was common too. Unlike Mary Slessor though, Olusola Stevens did not have the force of law or the power to stop the barbaric practices. Instead, he used moral suasion and alternatively asked these communities to allow him foster the twins and other children in such difficult circumstances.

Thus began a lifelong career in care-giving and humanitarian work generally. Olusola Stevens told me that out of a good number of children that have passed through his home, many have found succour and are living normal lives. “One is married, five have graduated (from higher institutions), four are undergrads, while three are in colleges of education” just as he had always wished for them, and in accordance with the policy of the home to reunite the victims with their families if both parties so wish.

“I want them to be independent, to live normal lives within the society and possibly reunite with their families. They should not remain here forever. All those who have gone to higher institutions or gone to learn some vocational skills have been absorbed into the larger society”, he said. So far, the Home has reunited 18 children with their families, but in one particular case, there is a 17-year-old that no one has ever shown up for. For others, their relations are known, even if not connected physically or emotionally.

You’d wonder what the motivation is for Olusola Stevens, who also enlisted the support of his 81-year-old mother, who sometimes comes around to offer assistance. “I see it as a calling, but my wife and I started as ‘church planters’. We would go to the rural areas to plant churches, preach the gospel and convert people. And in the course of doing that, we got to know of communities that despised twins and would kill or abandon them. We made a case for their (twins) survival and sustainability, and began to pick or take them from families”.

Today, after establishing confidence in the couple and Vine Heritage Home, twins, abandoned kids or orphans are brought to the home deliberately by such communities. And in doing their due diligence, the authorities of the Federal Capital Territory Administration (FCTA) have approved the works of the Home, having investigated and confirmed the narrative.

Olusola Stevens’s modest passion has been transformed into a behemoth, an oak tree that is home to vulnerable children, as attested to by the sheer number of children and the gigantic home housing the children. Built in conjunction with some organisations like the European Union, Action Aid Nigeria and the MATAI project, which served as technical partners, the Stevens should be proud of their service to humanity.

The MATAI project, an acronym for Mobilising Action Towards the Abolition of Infanticide, mobilises towards the abolition of infanticide. Olusola Stevens once ran a project with them and with sponsorship from Amnesty International. “All I want is to get to the root of the problem by starting a project to stop the killing of children”.

Olusola once worked as a manager with a Chemist shop and supermarket. He resigned in 1991 to start a training in missionary activities; from those activities, a charity home sprouted in the service of communities and to the glory of God.

So much work has been done at Vine Heritage Home, so much is being done and so much still needs to be done. Here lies the challenge for all who should help to sustain the work already started from the magnanimity of the heart of one man.

The Stevens have only one biological daughter but raising tens of hundreds.

The major needs of man are food and shelter, but for the Home, while the children have roofs over their heads, feeding that large number is no tea-party. The founder therefore appeals to well-meaning individuals and organisations to help with basic needs, especially foods and clothing materials, even as paying workers is herculean too.

One of those working almost pro bono, is the resident nurse, Phoebe Caleb, who took her time to explain the operations of the Home. There are two other volunteers. Phoebe and many other staff like the nannies and cleaners also need to get paid in order to work and live normally. It doesn’t stop there.

The children that are of school age have to go to schools outside the Home and in nearby Gwagwalada, requiring transportation and school fees. Fortunately, some schools around Gwagwalada offered them some discount, while they recently got a free bus from the office of Head of Service of the Federation. More gestures like these are required to keep the Home going, and for the work it set out to do in rescuing and giving succour to the indigent to continue.

Olusola who is Yoruba and married to an Igbo wife is not without his own personal challenges. His wife recently had a major health challenge and doctors advised that she should steer clear of the Home and reduce her work load, which indeed is enormous, at the Home.

It was supposed to be a casual visit to an orphanage. But I didn’t bargain for the inspiring story of one man caring for many children, all alone. His effort has renewed my faith in humanity and the conviction that the good in us actually outweighs the work of bad people giving us a bad name.

The children at Vine Heritage Home need interventions from well-meaning people and organisations to survive into adulthood. No one person has all the resources required. It takes the collective will of all to do this.

Olusola Stevens can be reached via vineheritagehomeforthenations@gmail.com and www.vinheritage.org.ng for that purpose.

Zainab Suleiman Okino chairs Blueprint Editorial Board. She is a syndicated columnist.

INEC, CBN and the weekend of extensions, By Reuben Abati