Yemi Osinbajo and why we are where we are, By Rudolf Ogoo Okonkwo

When politicians show you who they are, believe them. 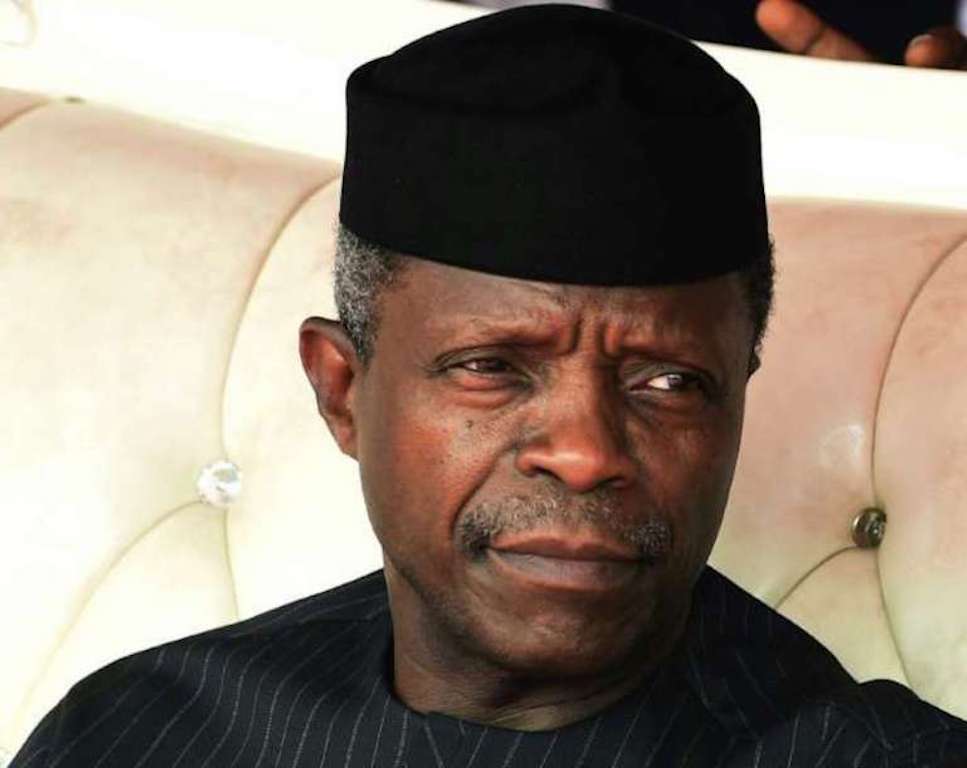 We need to hold accountable both the best and worst of them. If we let accountability slide because the stains on the culprit may be minor, tomorrow, it will metastasise and be as pronounced as what we see on the worst of them. The monster that we indulge and coddle always ends up swallowing us.

Last week, the People’s Gazette published a news story about how Vice President Yemi Osinbajo obtained N200 million from GTBank in 2015, soon after he was named Muhammadu Buhari’s running mate. The newspaper received copies of bank transfers showing that in 2015, the then pastor turned politician got GTBank’s Investment One fund management department to pay N200 million in three installments of N100 million, N50 million and N50 million into Mr Osinbajo’s campaign account.

As a Senior Advocate of Nigeria, Osinbajo knew this. But he did not care. Doing whatever he needed to do for him and Buhari to win the 2015 presidential election was more important than obeying Nigeria’s law.

What is sad is not that Nigeria’s mainstream media ignored the Gazette story. Most Nigerian media houses have hiked their tents with different political players in this political season. What is sad is not that a Senior Advocate of Nigeria, a professor of law and a pastor at the Redeemed Christian Church of God, did not blink one bit as he violated the law of the Federal Republic of Nigeria. But that the people Osinbajo’s action should have repulsed were mainly indifferent.

Some committed people, however, dedicated their time to defending the Vice President.

Because the newspaper has documents showing the transfer, few people questioned if it happened. Some still did, despite the documents. Those are the incurable ones.

The newspaper spoke to officials of GTB on record. They played the usual game. Knowing that there are supporting documents, these officials acknowledged that their bank did the transfers. Then, you hear excuses like, “it is confidential”, “those are privileged information”, “we cannot respond because of privacy rights.” Once any institution issues such a response, know that they have been caught.

Ademola Aofoloju, the CEO of Investment One, said the matter of Osinbajo and the N200 million was classified. It is a new addition to the usual excuses. Then, GTBank made an effort to extradite itself from the Investment One fund, the GTBank’s entity that did the transfers. That effort failed, too, as the newspaper showed that as of today, GTBank has full ownership of the Investment One fund, after a period of murky effort at disinvestment.

To respond, the People’s Gazette reached out to Osinbajo’s Press Secretary, Laolu Akande, but he declined to comment. Once the spokesman of a politician has nothing to say on stories like this, it is a sign that “we got caught,” or that “we are still cooking up an acceptable response.”

It has been over a week now. So far, Vice President Osinbajo has not threatened to sue the People’s Gazette and all those who shared the story on their blogs, Facebook pages, or WhatsApp groups. That is uncharacteristic of the Vice President and his team. None of his lawyers has gone on TV to launch a stern defence. None of his writers has written an angry and obfuscating opinion piece attacking the newspaper. Why is that? Have they not received their monthly payment?

Of course, ordinary Nigerians, the vice president’s admirers, and those in his rapid response bunkers across Nigeria, have been firing missiles. The first question they raised was: Why would the VP need that amount of money when he was not the one running for president?

The answer to this is straightforward: Candidates on any ticket, be it presidency, governorship, or whatnot, are expected to raise money for the campaign. For that reason, the Vice President set up a campaign account and raised money. The Gazette showed that it was not just GTBank that donated. “Similarly, the documents showed Dapo Akinosun, the Managing Partner at Mr. Osinbajo’s law firm SimmonsCooper Partners, deposited N50 million naira in two payments of N25 million into the same campaign account for Mr. Osinbajo in 2015.”

The paper continues, “Two other lawyers who also violated federal law were Olufemi Atoyebi, the Principal Partner at Femi Atoyebi and Co, and Temitope Lawani, the co-founder and Managing Partner at Helios Investment Partners. They paid N10 million each, well above the allowable limit of N1 million.”

So, Osinbajo was not the only lawyer violating the law. His partners and friends were also doing the same. Despite that, there are Nigerians out there defending the Vice President.

And now this serious indictment: “SimmonsCooper, a white-shoe law office which Mr. Osinbajo co-founded and ran until he became vice president in 2015, has been taking federal contracts under the Buhari administration.”

To prevent these kinds of behavior is the reason why countries have electoral laws. Other reasons for the law are to limit how much money people can donate to election campaigns, to document who donated, and monitor conflicts of interest resulting from such donations. That Osinbajo’s law firm, which donated N50 million to his campaign, accepts federal contracts under the Buhari-Osinbajo government is a blatant violation of conflict of interest. Not even Donald J Trump stooped this low. If a Senior Advocate of Nigeria, law professor and a pastor to boot, is behaving this way, why should anyone expect wonders from a man with a mere secondary school certificate?

Maya Angelou once noted that, “When people show you who they are, believe them.” When these people are politicians, groomed in the act of deceit, when you get a golden opportunity to see who they are, please take it to the bank. For instance, seven years after, Buhari has not outgrown that statement he made in June of 2015 at the US Institute of Peace in Washington DC. “I hope you have a copy of the election results,” he said while answering a question. “The constituents, for example, [that] gave me 97 per cent [of the vote] cannot, in all honesty, be treated on some issues with constituencies that gave me 5 per cent.” That is who Buhari is and he has been true to himself.

When politicians show you who they are, believe them.

In defence of the Vice President collecting N200 million from GTBank, some Nigerians argued that “they all do that.” That is one of the weakest defence out there. If they are all lawbreakers, if they are all thieves, and we have no hope to sanitise the system, why don’t we choose the greatest thief of them all? Why do we always look for the moderate one? Over the years, the moderates have consistently failed us. If we don’t want to insist on excellence or have given up on demanding what we know to be right, why can’t we try our luck with the worst of them? Maybe, just maybe, we will witness a conversion of Saul to Paul. These moderate thieves appear not to have anywhere to go but up the ladder of corruption.

We need to hold accountable both the best and worst of them. If we let accountability slide because the stains on the culprit may be minor, tomorrow, it will metastasise and be as pronounced as what we see on the worst of them. The monster that we indulge and coddle always ends up swallowing us.

Those who pampered and protected Bola Tinubu during the early 2000s, when we first raised questions about his integrity and ethics, could have saved us all and the man from the current litany of embarrassments that he splashes everywhere he goes. His enablers then thought they were doing him a favour. By not holding Bola Tinubu accountable and getting him to change his ways, he got emboldened, and now history will remember him as one of those men who used the first part of their lives to destroy the last.

With all due respect to those paid to defend Nigerian politicians, you all are doing fantabulously (apologies to Macaroni). But the innocent ones who want to believe in these politicians, I appeal to you to pay attention to what the monkey famously said. When confronted that its child stole a fruit hanging off a tree, the monkey said it could only vouch for the baby in its womb and not the one on its back.

Nigerians who vouch for politicians they do not know should take a cue from what the monkey said above.

Yes, attitudes like these are why we are where we are today.

Rudolf Ogoo Okonkwo teaches Post-Colonial African History at the School of Visual Arts in New York City. He is also the host of Dr. Damages Show. His books include This American Life Sef, Children of a Retired God, among others.