Kemi Adeosun and a less than salutary public career, By ‘Sina Kawonise

When in office, Kemi Adeosun pushed Nigeria back the precipice of an unbearable external debt burden. 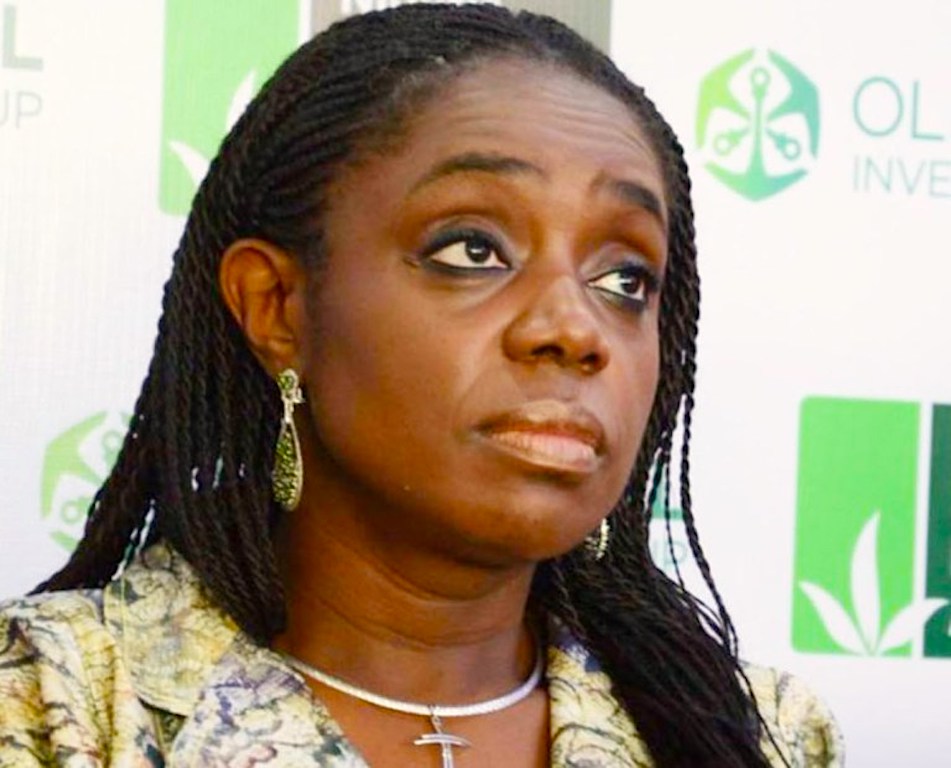 In specific terms, it was Kemi who persuaded the Buhari government to indulge more in external borrowings because, according to her, interests on external debts were lower than local ones. While former President Olusegun Obasanjo achieved the monumental feat of getting Nigeria out of its huge external liabilities…Kemi Adeosun pushed Nigeria back the precipice of an unbearable external debt burden.

Since the High Court judgment on Kemi Adeosun’s NYSC certificate scandal, her brother Dele Osun has been putting up spirited defenses his sister, abusing everyone who disagrees with his viewpoint, running down PREMIUM TIMES, who broke the story, and those who dare to raise issues with his opinions on the matter as ‘idiots’. In one of his posts, he alleged that some imaginary people, “simply wanted to get her out of the office to make way for the one who is mortgaging the country to the hilt, and the best way was to lie through PREMIUM TIMES”. This is a repeat of his assertion that Kemi was “forced out of office” as Minister of Finance to allow the Buhari government to plunge the country into the debt overhang that has become the hallmark of the Federal Government that Kemi worked for as Finance Minister.

The fact of the matter is that it was Kemi, as Finance Minister, who started Nigeria on the path of its current  bottomless pit of debt.

According to reports from Debt Management Office (DMO), as of June 30, 2015, Nigeria’s debt was N12.12 trillion. By December 2017, 30 months after Buhari took over as President and 25 months after Kemi became Minister of Finance, Nigeria’s debt had ballooned to N21.73 trillion, an increase of N9.61 trillion, or 79.25 per cent over what was inherited. By the time Kemi was forced to resign on September 14, 2018, the country’s debt had further increased to N24.35 trillion. This represents an increase of N12.23 trillion or 100.9 per cent of the debt figure inherited.

As such, Dele Ogun’s allegation that Kemi was forced out of office to pave way for unbridled borrowing by the Buhari government has no foundation in fact. When the history of the Buhari government is written in the fullness of time, Kemi Adeosun’s name will feature prominently as a principal figure in the destruction of Nigeria’s economy.

In specific terms, it was Kemi who persuaded the Buhari government to indulge more in external borrowings because, according to her, interests on external debts were lower than local ones. While former President Olusegun Obasanjo achieved the monumental feat of getting Nigeria out of its huge external liabilities – the profile former President Goodluck Jonathan strenuously maintained by keeping external borrowings very low – Kemi Adeosun pushed Nigeria back the precipice of an unbearable external debt burden.

This is not a good reputation for anyone to flaunt!

Kemi Adeosun became Ogun State Commissioner for Finance in 2011, after I had left office as Commissioner for Information and Orientation. The first thing I realised about Kemi was how easily she lied with figures. A few weeks after she assumed office, she put out a figure of N138 billion as debt left behind by ex-Governor Ibikunle Amosun’s predecessor, Otunba Gbenga Daniel (OGD). Later on, in August 2011, when she accompanied her principal to Olabisi Onabanjo University to see the devastation left behind by a terrible armed robbery attack on the campus, she told journalists there that the government she served inherited a N103 billion debt. This figure got down to N78 billion about six months after. After Ernst & Young accounting firm, contracted by the Amosun government to do forensic audit of the State’s accounts finished its work, it was discovered that OGD left a paltry debt of N4 billion after bank reconciliations that yielded to Amosun more than a N10 billion refund in excess bank charges and refunds for federal road constructed by the OGD administration.

For, if the debt repayment rate remains at the N1.39 billion per month level of 2016, it’ll take a minimum of 30 years to settle the debt at a conservative single-digit interest rate of 9 percent.”.. From the above, it could be seen that before Kemi was pivoted to the federal level by her principal, Ibikunle Amosun, she had become well practiced in the ignoble act of debt entanglement.

More serious than the habitual lying by Kemi was her participation and justification of what became known in Ogun State as the regime with unjustifiably high and mind boggling costs of project delivery. What I wrote in May 2018 captures the pillage by the Amosun government, for which Kemi Adeosun was the treasury keeper for four years:

“Besides the normal recurrent expenditure, which has been consistently high under the Amosun Administration, about 90 per cent of what remained for capital expenditure has been spent on expansion of very few existing urban roads in a few locations in the State. Out of a total of 2,545 kilometres of state (Trunk B) road across the State, Governor Amosun has spent almost N300 billion to expand a total of 347 kilometres. This represents a paltry 13.6 per cent of state roads crying for attention. Virtually all internal (Trunk C) roads in every city, town and village in the State have become impassable. This is the case because all federal allocations to Local Governments (LGs), as well as their Internally Generated Revenues (IGR) are seized by Amosun using the instrumentality of a law he enacted immediately he got into office for what he described as State/LG Projects Joint Account.

Apart from all other sectors neglected due to this mono-focus on urban road expansion which, in real terms, adds little or nothing to the GDP of Ogun State, the real tragedy is the huge debt Amosun will be leaving for all of us and our children to settle in at least the next 30 years.

The incompetence and irresponsibility of the current government are vividly captured in the 2016 Financial Statement of the State published in some national newspapers on December 28, 2017. In that Statement, Ogun State had a total revenue of N114.8 billion. From this figure, FAAC allocation from Abuja was N32.6 billion, IGR N71.5 billion, and others (not specified – most probably short-term loans from banks) N10.7 billion.

From this revenue of N114.8 billion, N70 billion (or 61 per cent) went on recurrent expenditure in 2016. While salaries and emoluments took N39.5 billion, overhead costs consumed a whooping N13.8 billion, with debt servicing taking away N16.7 billion (this amounts to N1.39 billion monthly).

From the figures above, it would be seen that only N44.8 billion was available for capital expenditure. To appreciate the level of incompetence and corruption of the Amosun government, I’ll cite two roads that are typical of the road expansion projects executed by it.

If the total amount available for capital expenditure in a typical year (as it was the case in 2016) was N44.8 billion, how does anyone justify spending N1.98 billion to expand one kilometre of an existing road with no strategic importance or the potential to boost the local economy? At that rate, it means the whole N44.8 billion could expand a total of only 22.6 kilometres in a budget year, out of the 2,545 km Trunk B roads and tens of thousands Trunk C roads needing attention.

Another claim by Kemi’s elder brother, Dele Ogun, is that she was headhunted to serve Ogun State, first, and later the whole of Nigeria. That term ‘headhunted’ is reserved for outstanding individuals who made notable marks… What was Kemi’s position among her class in the U.K. polytechnic she attended? What academic papers/books did she have to her name prior to her appointment as Ogun Commissioner? What was her rank in the bank she worked in before coming to Ogun State?

Now, the reported costs of the road projects are another matter entirely. The Lagos-Ibadan express road being executed by the Federal Government is 124 km at a cost of N167 billion, which translates to N1.35 billion/per kilometre. While the Sagamu-Lagos end is 8 lanes, the Sagamu-Ibadan portion is 6 lanes. Apart from the width of the FG’s road, the construction is a total overhaul of existing road with massive excavation and very thick concrete and asphalt overlay that are several times the volume and dimension of any of Amosun’s roads. Yet, the FG’s road is far cheaper than what is delivered to us in Ogun State.

In the 2016 Financial Statement referred to earlier, the government reported a total debt stock of N113.2 billion, being internal and external loans. This is partial reporting and concealment of facts. Non-flow debts of liabilities to workers and pensioners, outstanding payments to contractors and suppliers are not included. Informal estimates have it that total non-flow debts are about N150 billion. With the interest-based debt of N113.2 billion, the $300 million (N109 billion) World Bank loan recently and dubiously approved for Amosun by the National Assembly, the current government will be leaving a whooping N372 billion debt overhang for Ogun residents to sort out for the next two generations. For, if the debt repayment rate remains at the N1.39 billion per month level of 2016, it’ll take a minimum of 30 years to settle the debt at a conservative single-digit interest rate of 9 percent.”

From the above, it could be seen that before Kemi was pivoted to the federal level by her principal, Ibikunle Amosun, she had become well practiced in the ignoble act of debt entanglement.

Another claim by Kemi’s elder brother, Dele Ogun, is that she was headhunted to serve Ogun State, first, and later the whole of Nigeria. That term ‘headhunted’ is reserved for outstanding individuals who made notable marks during schooling, in their academic accomplishments, and professional careers, and known notable contributions to public policy, disruptions brought to business, etc. What was Kemi’s position among her class in the U.K. polytechnic she attended? What academic papers/books did she have to her name prior to her appointment as Ogun Commissioner? What was her rank in the bank she worked in before coming to Ogun State? We also need to be told by her brother, Dele: What ground-breaking policy contributions did your sister make as Finance Minister? You claim that your sister was a victim of Pull Her Down (Phd) syndrome. Of what importance was she to the Nigeria project that some people (beyond her fellow hustlers in the failed government she served) would be sworn to pull her down? From what height? Being Minister? While I understand how destiny-changing being Minister could have been the Adeosun family, her tenure made Nigeria and Nigerians worse off.

Now, is it in defence of this disreputable record that Dele Ogun thinks he is at liberty to abuse those who are superior to him intellectually, in professional attainments and other accomplishments. Dele, what accomplishments do you have as an historian and lawyer to impugn the attainments of PREMIUM TIMES and the excellent professionals behind the locally and internationally acclaimed publication? The inanities you uttered about the newspaper and those who questioned your prosaic defense of your sister are absolutely beyond you.

There are far more to reveal about the idol of your clan, Kemi Adeosun. My prayer is that you make good your threat to sue PREMIUM TIMES. In the open court, you’ll learn that, in matters of integrity, dignity and social attainments, your sister is lighter than chicken feather.

‘Sina Kawonise is a former Commissioner of Information and Orientation in Ogun State.