The Foundation's intervention was described as a rare feat in civil society work. 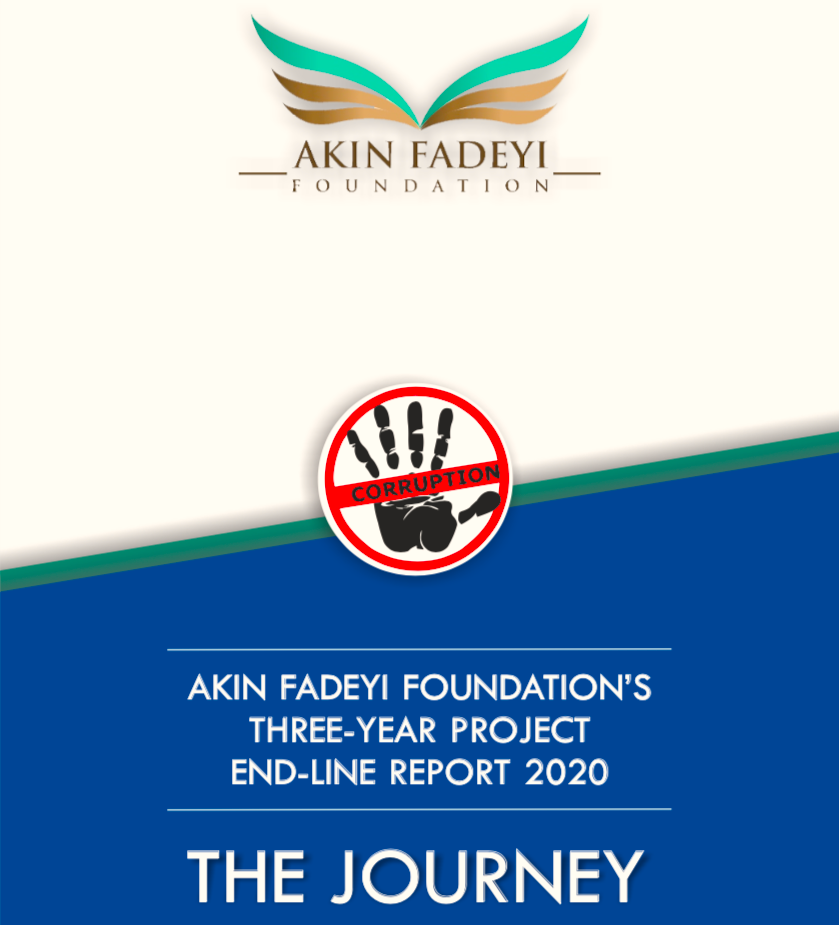 The gathering didn’t fall short of expectation in any way. A healthy convergence of deep thinkers, men and women who nurse a noble vision of an improved society, driven by a focused leadership offering transparent and accountable governance, would offer no less. All through the ceremony, there were frank dissections of corruption, its harmful effects and how Akin and his wonderful team have been working from the grassroots…

On Tuesday July 13, two separate events were going on at the same time in Lagos and Abuja. The Lagos event was a highly captivating media dialogue on the vexed national question, jointly convened by the Wole Soyinka Centre for Investigative Journalism (WSCIJ) and the African Centre for Media and Information Literacy (AFRICMIL) to mark the birthday of Wole Soyinka, revered Nobel laureate and a durable totem of fairness, equity, liberty and justice. The prop for the discourse was a new book of essays, Remaking Nigeria: Sixty Years, Sixty Voices, edited by Chido Onumah of AFRICMIL.

The other function in Abuja was the launch of a report by Akin Fadeyi Foundation (AFF) to draw the curtains on three years (2018-2021) of implementing Corruption Not-In-My-Country, an anti-corruption project supported by The John D. and Catherine T. MacArthur Foundation, an immensely popular and impactful private grant-making foundation, which supports non-profit organisations in about 50 countries around the world.

It was to this latter, equally momentous occasion that one retired primarily for two reasons. First, to honour Akin Fadeyi, founder/executive director of AFF, for doing so much in concrete terms to ensure we have a country where corruption and other forms of wrongdoing that endanger the wellbeing of society are significantly reduced, even if totally wiping it out is unrealisable. Second, to mingle and meet minds with fellow citizens and duty bearers who are just as disturbed as one is by the extent to which endemic corruption continues to deplete the country and stall development.

The gathering didn’t fall short of expectation in any way. A healthy convergence of deep thinkers, men and women who nurse a noble vision of an improved society, driven by a focused leadership offering transparent and accountable governance, would offer no less. All through the ceremony, there were frank dissections of corruption, its harmful effects and how Akin and his wonderful team have been working from the grassroots to change the behaviour of citizens toward corrupt practices.

To say that Akin possesses a seductively huge passion for justice is to affirm the obvious. He knows enough to understand that nothing threatens justice more than corruption. The guy won’t just take his eyes off unjust or unfair action in their manifold nuances, without summoning energy and raising a limb toward attaining corrective measures or a long-lasting remedy. This, in a nutshell, seems to be the reason that AFF was set up.

For one, the open sesame to this surge of unrestrained zest for propriety was sometime in June 2017 in the case of Joy Odama, a 200-level mass communication student at the Cross River State university, who was allegedly murdered six months earlier in Karmo, a suburb of Abuja, by one Alhaji Usman Adamu. Akin and I, without having ever set eyes on each other, worked to get justice for the Odamas, but it was not to be, as the police, then led by Ibrahim Idris, frustrated all reasonable effort in that direction. It turned out that Ralph Nkem, then a chief superintendent of police and head of Karmo police station at the time, had been an enduring friend of the suspect and so, in the end, they made sure there was no justice for the victim, the offender and society.

Shettima said the relationship had been smooth and the Foundation was excited about the positive transformation of citizens behaviour brought by AFF’s Corruption: Not-In-My-Country initiative. As a result, he announced that MacArthur Foundation has decide to fund the project for three more years.

But as can be seen, Akin is unrelenting and has been in that mode from the beginning, those who know him enough say. Unfortunately, he was not present at this event but who better to offer a clue to his ebullient spirit than his good friend, Azubuike (better known as Azu) Ishiekwene, editor-in-chief of LEADERSHIP and himself a remarkably perceptive columnist of intriguing fecundity.

Azu, who stood in for Akin and delivered the welcome address on his behalf, recalled with verve how, as executive director (publications) of The PUNCH, Akin had one day walked into his office at Magboro, on the outskirts of Lagos, clutching three demos. Azu said he handed them over to him and after listening to the stuff, he was instantly convinced that the bearer had a mission to accomplish. Just then he said he linked him up with Elder Folu Olamiti, a senior colleague in the journalism profession, who was then holding a top position at the Independent Corrupt Practices and other Related Offences Commission (ICPC). And boy, has Akin proved his worth since then!

The words of Dr Kole Shettima, Co-Director, On Nigeria and Director, MacArthur Foundation, Nigeria Office, were even more revealing of the promise Akin symbolised. Shettima, a warmhearted intellectual who is both well-known and well regarded across government, corporate and civil society circles, conveyed a goodwill message headlined by how he never knew Akin until he encountered him on Simon Kolawole Live, a weekly column in THISDAY, written by Kolawole who founded and heads The Cable newspaper. Kolawole also chairs the board of trustees of the Akin Fadeyi Foundation.

Specifically, Shettima had read about the Foundation, not even on the main column but on the margins of it, which Kolawole traditionally reserves for ‘four other things’ of his interest. He was fascinated by what he read and decided that the MacArthur Foundation would work with AFF in its mission to change citizen behaviour for a better society. They began by sponsoring Akin on a one-week intensive course on behavioural science at the Kennedy School of Government in Havard, USA.

Shettima said the relationship had been smooth and the Foundation was excited about the positive t iransformation of citizens behaviour brought by AFF’s Corruption: Not-In-My-Country initiative. As a result, he announced that MacArthur Foundation has decide to fund the project for three more years. And then the hall erupted in a thunderous cheer and applause.

Dr Boboye Oyeyemi, whom Shettima loves to describe as the Corps Marshal of the Federation, led a team of top officials of the Federal Road Safety Commission to the event, saying it’s a moment to cherish in the strategic partnership between FRSC and AFF. Commending MacArthur Foundation’s renewal of the project, Boboye said such gesture could only be reserved for an organisation like AFF that had done exceedingly well so far. He said FRSC would continue to work with AFF, not just to achieve their separate goals but also in the larger interest of the country.

Aptly titled The Journey, the report is a glossy 56-page document containing everything readers need to know about AFF and its work. Dr Otive Igbuzor, Executive Dir ector, African Centre for Leadership, Strategy and Development (Centre LSD) and Chief of Staff to the Deputy Senate President, unveiled the report and described AFF’s intervention as a rare feat in civil society work.

The keynote speech was delivered by Yusuf Ali, a Senior Advocate of Nigeria, who recalled knowing Akin in Ilorin some 40 years ago. He said Akin was in the secondary school then and was Nigeria  always coming to the house which his departed wife, then a member of the youth service corps, shared with another colleague of hers. Ali vividly remembered him as “the boy who was always coming to the house in his school uniform looking very dirty.” But conversely, he also viewed him then as a cut of diamond still covered with dust, a smart boy whose eyes glinted with future excellence. Said Ali: “Akin reconnected with me just about four years ago and I’m not surprised about how far he has gone and what he has done for himself and the Foundation today.”

The learned silk, who in 2016 launched a book, Anatomy of Corruption in Nigeria, spoke on “Anti-corruption Endeavours and Government Collaboration: A Strategic Recipe for Nation Building.” The takeaway from his presentation, as he himself agreed, is that corruption in the country is worse today than it has ever been. That corruption has indeed skyrocketed under a government whose major promise on the campaign trail is to fight corruption on all fronts, under a leader reputed to be incorruptible, would undoubtedly be logged down as an irony of epic proportions.

Aptly titled The Journey, the report is a glossy 56-page document containing everything readers need to know about AFF and its work. Dr Otive Igbuzor, Executive Director, African Centre for Leadership, Strategy and Development (Centre LSD) and Chief of Staff to the Deputy Senate President, unveiled the report and described AFF’s intervention as a rare feat in civil society work.

After three years of implementation, Corruption: Not-In-My-Country has registered as the most profound of AFF’s projects. It comprises documentaries featuring one-minute video skits, ‘Never Again’ radio drama series, ‘Badt Guys’ TV series and capacity building programmes in some secondary schools in Abuja. The bellwether of the project is the FlagIt app, an innovative technology platform designed and deployed as a tool for reporting and flagging corruption and misconduct by public officials. It is also being deployed in schools to check corruption and other kinds of wrongdoing and has recorded tremendous success in Afe Babalola University, Ado-Ekiti, for example.

As Oluwatomi Okeowo, programme manager of AFF said, the overall goal of the Foundation is to achieve “active citizen participation” in the efforts to realise good governance and a better country. The Foundation is counting on the support of partners in this journey.

Salute, in the language of the president, By Jenwi Folabo Ajayi