This newfound rapprochement could end up as a win-win situation for all sections of the country. 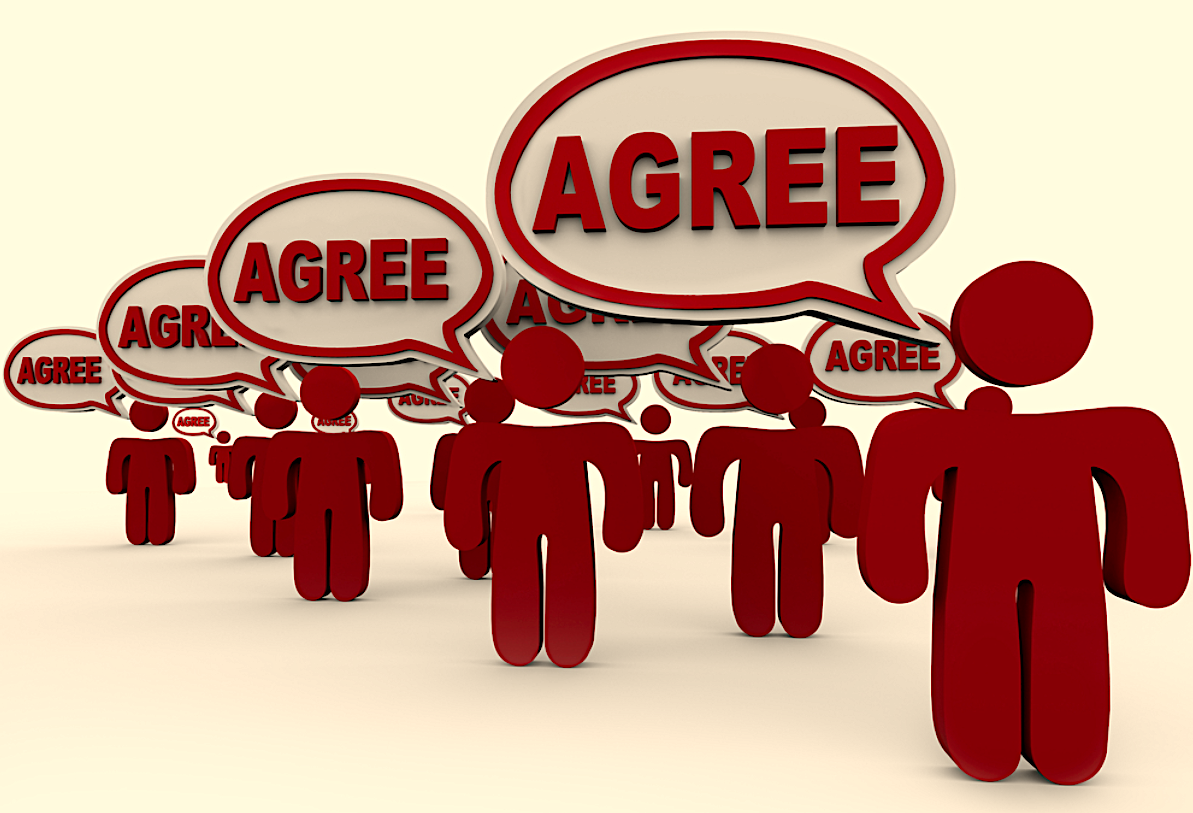 It appears that the elites who have secretly been stoking the flames of violence and hate are beginning to do a rethink. Somehow, the admonition that, “An eye for an eye leaves all of us either one-eyed or blind”, seems to have gained traction among the political aristocracy. The doves are raising their voice of reason above the din of the hawks.

“Peace does not mean an absence of conflicts”; says Dalai Lama XIV. “Differences will always be there. Peace means solving these differences through peaceful means; through dialogue, education, knowledge; and through humane ways.”

Such sentiments are desperately needed in Nigeria today. Different parts of the country have been vending different positions on the problem with the union of many nationalities called Nigeria. Many of the views are so diametrically conflicting that it is difficult to imagine how any kind of synthesis can be achieved. The elite on all sides have been hugging the limelight. They tell us what each region wants or what they will never accept.

In the past, the impression was given that the ‘North’ wanted a continuation of the status quo (that is, the current ‘unitary federalism’ in operation). The South-West’s position was championed by the Afenifere group, which insisted that the current system was unworkable and that the country was doomed without restructuring. Ohaneze Ndigbo of the South-East concurred and added that the marginalisation of the South-East in many segments of national life gave the impression that the civil war which ended 50 years ago was still on. The Middle-belt Forum and the Pan Niger-Delta Forum (PANDEF) have also been airing their views on the way forward.

For the first time since 1999 when Nigeria returned to democracy, the country is so divided that it is very difficult to hear anything above the cacophonous ethnic din. But surprise, surprise! In the midst of the various centrifugal forces, various alliances are being forged and hate vending is gradually giving way to unctuous rhetoric about the need for dialogue across the various divides.

Perhaps the elite on all sides have realised that they will be the first casualties when the bubble bursts. The masses are already lying flat on the ground — and he who is down fears no fall! The elite can no longer pretend not to notice the mass privation in the land and the unprecedented clamour for secession.

What made the current cry of, “To thy tents, O tribesmen” really worrying, was the level of vitriolic hatred exhibited by various groups against others. Many commentators warned that escalating socio-political differences to the level of open hatred was a recipe for genocidal confrontations. In a democracy, there is always room for disagreements; vociferous disputations come with the territory. But hate?

At a stage, it seemed the entire country was one sprawling ungoverned space peopled by atavistic natives baying for blood. One concerned Nigerian, Aminu Sa’ad Beli was so exasperated that he counselled that instead of fighting a senseless war, Nigeria could be peacefully dismembered as has happened in other countries. His examples: In 1776, the USA split from the UK; In 1830 Belgium separated from the Netherlands; In 1965, Singapore split off from Malaysia; in 2002, East Timor got split off from Indonesia; In 1921, Ireland split off from the United Kingdom, (and possibly in the future there will be secession of Scotland); In 1944, Iceland split from Denmark; In 1905 Norway split from Denmark; In 1947, the British India Dominion was partitioned into India and Pakistan; In 1971, Bangladesh seceded from Pakistan; etc etc.

I think the centripetal pull of the elite across geographical divides and political persuasions can be described as instinctive self-preservation. Come to think of it, if Nigeria breaks, there will be new Turks in each manor. The current ‘chiefs’ will most probably be reduced to low-level ‘Indians’.

But Beli cautions that ethnic homogeneity in breakaway countries will not guarantee peace as can be seen in South Sudan, where post-secession conflicts have been orchestrated by clans within the same tribe. If Nigerians from different parts are convinced that they can no longer cohabit as one country, he says, the honourable thing to do is to part peacefully and dialogue as brothers on the way forward. But hate should be completely out of the equation.

It appears that the elites who have secretly been stoking the flames of violence and hate are beginning to do a rethink. Somehow, the admonition that, “An eye for an eye leaves all of us either one-eyed or blind”, seems to have gained traction among the political aristocracy. The doves are raising their voice of reason above the din of the hawks.

Former President Obasanjo has been a recurring decimal in our various attempts at charting a way forward. Sultan Sa’ad Abubakar and Ooni Adeyeye Ogunwusi, together with other prominent traditional rulers, have also made highly publicised efforts to douse the flames of division.

The Nigerian Inter-Religious Council (NIREC), has been preaching peace and love. The involvement of traditional rulers in the search for peace across the country has, however, exposed some of them to the most virulent attacks by some of their people — an unprecedented affront.

Southern and Middle-Belt leaders have been forging a common front under the auspices of the Southern and Middle Belt Forum (SMBF). They said no section of the country could claim superiority over other sections, adding that failure of the federating units to live as equals may result in SMBL seeking alternatives.

The Northern elite have been reaching out. Both the Arewa Consultative Forum (ACF) and the Northern Elders’ Forum have endorsed restructuring as a way forward. For the first time in a long while, it seems the political elite in Nigeria have realised that the logical destination of the current unitary structure is dismemberment. So, after all these years of campaign to have a more equitable, less suffocating system, it appears there’s no stopping an idea whose time has come.

Dr Hakeem Baba-Ahmed, in stating the position of the NEF said, “We believe that restructuring represents a recognition of the fact that the current system is not working optimally. There are basic issues about how the federation functions. There are genuine needs for addressing those areas that present limitations to optimum utilisation of resources, devolution of power, innovative approaches to dealing with problems like security and improving national cohesion.”

This newfound rapprochement could end up as a win-win situation for all sections of the country if we are guided by the wisdom in Thomas Jefferson’s timeless words: “When injustice becomes law, resistance becomes duty”.

Former Speaker of the House of Representatives, Ghali Umar Na’Aba, has also gone on record as canvassing for the presidency to shift to the South in 2023. This is in recognition of the fact that a federation thrives on inclusiveness. If some sections feel they have no stakes in the federation, there will be no incentive for them to work for its cohesion.

I think the centripetal pull of the elite across geographical divides and political persuasions can be described as instinctive self-preservation. Come to think of it, if Nigeria breaks, there will be new Turks in each manor. The current ‘chiefs’ will most probably be reduced to low-level ‘Indians’. The impulsive, highly critical and energetic young population may elect one of their millennial generation to steer the ship of state. Old politicians will become dinosaurs. So, why continue bickering over cows and forests and Amotekun and Ebube Agu and JTF and bandits and marginalisation and tribe and religion when brother can reach out to brother across the regional isle and fashion out a more equitable way of cohabitation?

Those who have cast a nostalgic glance back at the First Republic have a point. In those days of relative innocence, we celebrated and tolerated each other. The words of the old anthem, “Though tribe and tongue may differ, in brotherhood we stand”, played out in real life. Each region developed at its own pace with its own unique character. If I remember correctly, primary education in the North, for example, took seven years while it was six years in the West and eight years (Primary 1 and 2, and Standard 1-6) in Lagos.

There was tribal jostling by the politicians in their bid to secure their homesteads, but there was nothing near the current open, in-your-face marginalisation, hate-vending and outright disrespect for the views and feelings of others.

War? No! Dialogue? Yes, we should never be scared of talking to (not, at) each other in Nigeria. If the presidential boulevard on which we are treading is leading nowhere, we can retrace our steps back to the good old parliamentary highway from whence we came. In charting a way forward, no options should be off the table.

This newfound rapprochement could end up as a win-win situation for all sections of the country if we are guided by the wisdom in Thomas Jefferson’s timeless words: “When injustice becomes law, resistance becomes duty”.