Fulani Herders and Getting Cheap Meat To the Market, By Gbenga Olawepo-Hashim

Anyone with a better argument should bring it up and let’s debate this subject.

Agro-economic policies should not be a function of sentiments and politics but sound economics. Ranching, which some governors favour, will deliver beef to the market at a higher cost than that of the U.S. if finally adopted, because the landing cost of the equipment and services will make the price of beef completely unreachable for most households.

As a businessman and one with a passion for economics, I have always believed that price could be a signal of the best economic policy choices. In my secondary school, some of my classmates called me ‘Baba Econs’. For the fun of it, I took the O’ level WAEC examination in Economics as an external student in my junior class, and I was glad with the result; I had A1. When I attended University of Buckingham in United Kingdom for my Masters’ Degree, I was grateful to God that I obtained Distinctions in International Economics and International Finance to be sure that the secondary school performance was not a fluke. Sounds boastful and immodest but it has become necessary in Nigeria’s heavily opinionated atmosphere to make such introduction on this emotive subject matter. After all, I am just another politician; one of those expected ‘not to know anything’.
Back to the real question: What are the things that Nigerian herders do that has kept the price if beef in Nigeria as one of the lowest in the world, precisely at $4.85 per kilogramme, in comparison to the higher prices obtainable in countries where most Western-oriented commentators want us to switch our livestock production pattern to, such as the United States, where the price of beef is five times the Nigerian cost, at a whopping $24.18 per kilogramme; the Netherlands at $24.19 per kilogramme, and Israel at $21.49 per kilogramme.
I reproduce below a global index of beef prices. 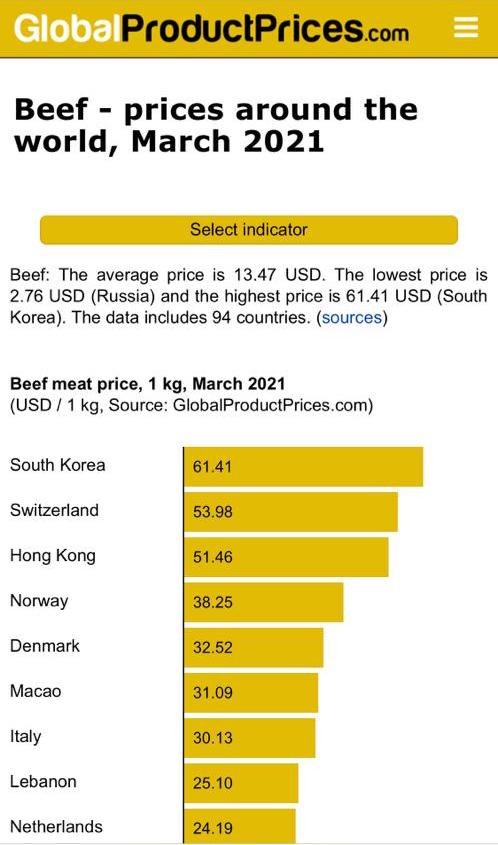 What will be the consequence when we change the method of raising cattle? Pretty simple stuff. The first is that, the herder takes his cattle to the grass, he does not pay for the price of bringing the grass to his cattle. The second is almost similar; he takes his cattle to water, and he does not bring water to his cattle through a complex irrigation system that needs to be paid for in hard currency and maintained by experts from overseas.
The third and most important, most times, is that the herder is the pharmacist, nurse and doctor of his cattle through a deep understanding of plants in the forest, passed to him by his ancestors from generation to generation, and which has now been lost to most sedentary people. This may not be an exactly preferred veterinary medical practice, but it helps him keep his cost low.
He is also the social worker and the security personnel to his cattle, like David in the Bible who would puts his life at risk to save only one of his sheep, fighting physically with bare hands against the Lion.

Most of us today ridicule that commitment to a work culture that has endured for generations. We say with derision that some people prefer cows to life. The truth of the matter is that for any enterprise to succeed and endure, there must be passion even before thinking about money. Perhaps that is why the herder is reluctant to embrace a system that would put his cattle in the hands of civil servants who have been designed to manage the National Livestock Transformation Plan.

My economic instinct tells me that we may have ignored very important lessons from the best local expert in cattle rearing and management – the Fulani herder – in our emotionally driven path to create a new livestock management system.

I am not a Fulani, but I grew up in New-Bussa, Niger State, and in Kwara State, surrounded by Fulani settlements. I did not grow up with the consciousness of seeing Fulanis as oppressors seeking to grab anyone’s land as it is now the narrative, because of the almost abject poverty of most of them that I knew while growing up. As a matter of fact, we had a lot of them as our helps, and we respected them and learnt a lot from their wisdom and simplicity.

We all agree that open grazing must go for it sundry limitations, even though these are sometimes exaggerated through a general stereotyping that confuses the criminal activities of some foreign nomads who have infiltrated our forests, with the generally peaceful and lawful activities of local herders who have done their business peacefully for ages.
Some of the well adumbrated ‘sins’ of open grazing include: the destruction of farm lands; violence against sedentary farmers, which sometimes result in deaths; trespass on private properties; land grabbing; and the ambition of the Fulani ethnic group, even though unsubstantiated.
My economic instinct tells me that we may have ignored very important lessons from the best local expert in cattle rearing and management – the Fulani herder – in our emotionally driven path to create a new livestock management system.

Agro-economic policies should not be a function of sentiments and politics but sound economics. Ranching, which some governors favour, will deliver beef to the market at a higher cost than that of the U.S. if finally adopted, because the landing cost of the equipment and services will make the price of beef completely unreachable for most households.

A word of caution for Federal Government officials: No matter how correct their positions are, they must learn the art of communication. They must not give the impression that the Fulani herders are especially favoured people by them, and unwittingly, set the Fulani up as an endangered ethnic group.

The last time I checked, the cost of a fairly used 18,000-acre ranch in Argentina was a whopping $10 million (N5 billion). Hundreds of such ranches would be needed, plus the landing cost, the cost of corruption, cost of delayed delivery, ports congestion, etc. I understand that some people don’t mind the higher cost of beef, as long as we ‘deal with the Fulanis’.

I discussed this with a couple, who replied me in Yoruba that, “Aani tori pe a je eran, ka pe malu ni boda” (meaning literarily that: We won’t pass the respect normally reserved for humans to a cow on account of our desire to eat beef). That may be true and in sync with the prevailing sentiments, but an enduring National Agricultural Policy cannot be determined by base sentiments but on the numbers.
I am persuaded that a policy which confines herders to grazing reserves, where they will still be in control of their cattle but will not be in a position to trespass on other people’s land, would be a superior choice to a plan that hopes to put experienced pastoralists under the management of civil servants, who lack any experience in cattle breeding and who are advised by imported specialist with zero knowledge of the local environment.
The policy of developing grazing reserves must, however, not be imposed on any state that does not want it; after all, ‘land use’ under the Nigerian Constitution is within the jurisdiction of state governments. Those who want to breed their cattle at five times the present cost have the fundamental human right to choose that, and those who want to breed their cattle at low costs also have rights to do so; that is what true federalism means.
A word of caution for Federal Government officials: No matter how correct their positions are, they must learn the art of communication. They must not give the impression that the Fulani herders are especially favoured people by them, and unwittingly, set the Fulani up as an endangered ethnic group.
Both herders and farmers are Nigerians, and our ability to improve on the local experiences of these two strata in the agricultural sector, modernising their experiences, improving on their techniques and not completely abolishing them, will be the direction to go for sustainability, peace and security.
I know this option would be controversial. Anyone with a better argument should bring it up and let’s debate this subject.
Gbenga Olawepo-Hashim is a former presidential aspirant and businessman.