Okonjo’s Five Million Jobs – Only Through A Public Goods Focus, By ‘Tope Fasua

I believe two million sustainable jobs can be created in the environmental sector immediately. 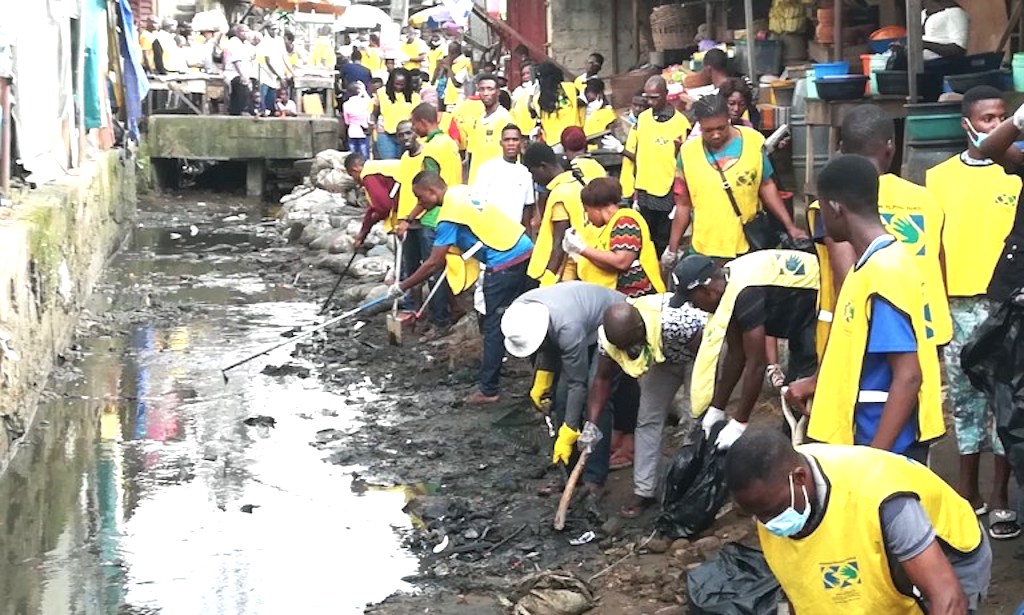 I suggest a return to the basics; concentration on the provision of public goods… What are public goods? Food security, health, education, physical and material security, environmental sanitation and safety, mass mobilisation, say, around the need for unity in Nigeria. Government should stand back and reconsider these issues and areas of intervention.

Former Coordinating Minister for the Economy and Minister of Finance under the Jonathan and Obasanjo governments, and now the Director General of the World Trade Organisation (WTO), Dr. Mrs. Ngozi Okonjo-Iweala was in town on a working visit recently. The good lady was feted in several quarters. Many people have anchored the salvation of Nigeria on her shoulders, especially in the new position she occupies. I am a little less enthused though, given that the World Trade Organisation (WTO) is established for a specific reason, which I wager should not necessarily be the focus of Nigeria at present. Okonjo-Iweala as WTO chief can only assist us do better trade. As things stand, we have little to sell. We should be thinking of adding value to the primary products we sell for next to nothing. She may not tell us that truth, so as not to annoy her constituency, and so she may not be helping us. No. Africa cannot ‘trade’ her way to glory. Ricardo Hausman at Harvard has offered that rare advise; Africa must be innovative, and add value, and develop productive capacity that affords her ‘economic complexity’; a process by which she increases the KNOWLEDGE QUOTIENT of the goods she brings to the market or produces for the consumption of her people. We can never sell yams, cocoa, cassava, sesame, crude oil, or whatever it is, while importing technology, cars, machines and so on, and achieve long term trade surplus. It is simply impossible. We need good, honest advise.

The WTO is all about trade; setting the rules of global trade, regulating its 164 member states in trade, helping with multilateral agreements, and of course resolving trade disputes. The agency has been in a sand trap for some years now, perhaps leading to the early retirement of the last Director General, Roberto Azevedo, in May 2020.  New rules are not being made, its dispute resolution apparatus is comatose, and member nations on one side are complaining about the moratorium granted to the superpower countries on electronic commerce, where they have advantage, while others are complaining about the existing rules on agriculture and how it affects their food security. The U.S.A is complaining about state capitalism from China, while China is complaining about the overarching influence of the U.S.A on the body as a whole. I felt our golden girl, Dr. Iweala was walking into a sucker punch and could be better off as a university lecturer than taking on such an arduous task at her age.

In all the camaraderie that accompanied her visit, however, something profound happened. The new WTO DG, as part of her advice to the Nigerian government, stated that Nigeria must create five million jobs yearly for the next 10 years in order to effectively tackle the unemployment crisis. Nigeria had only just announced an unemployment rate of 33 per cent (core), with underemployment contributing another 27 per cent. Between those two, you have almost 60 per cent of people who should be working in Nigeria, either totally idle, or only just marginally engaged beneath their capacity. This means productivity is dismal. Nigeria has deceived herself for too long about creating entrepreneurs. The policy – which was also promoted and utilised under Mrs. Iweala’s 12 years of managing the Nigerian economy since the return to democracy in 1999 (21 years ago) – has totally failed. Who are the owners of the 37 – 41 million odd micro and small enterprises in the records of the Small and Medium Enterprises Development Agency of Nigeria (SMEDAN)? What value are they adding to the economy? Does Nigerian entrepreneurship have any transformative power on the economy? If there are so many entrepreneurs, how come we have the second highest unemployment figure in the world, following Bosnia Herzegovina or some war-torn, cold and depressing Eastern European country or is it landlocked Namibia?

There are opportunities in some sectors, like agriculture, mining, and elsewhere, but new, inexperienced entrepreneurs may face fierce competition, or lack capital to make a headway. What is more? Nigeria does not need more than a couple of million of entrepreneurs. Joseph Schumpeter proposed that entrepreneurs must add value in order for GDP to grow.

I quarrel with the panacea offered by Mrs. Iweala, because it is still a repetition of the old elixirs. She spoke about ‘value-added manufacturing’ and charged the entrepreneurs at the occasion to step into the breach. She even mentioned digitisation in another meeting, without helping with the critical explanation of how we will turn digitisation – which at first glance knocks millions off the job circuit – into an advantage in job creation. Nigeria – nay Black Africa – is saddled with a gargantuan problem with this job creation issue. The world is digitising fast. COVID-19 has only accelerated the process. Powerful people from developed nations say people should work from home and allow the machines take over the physical stuff. In Africa here, we have very little for people to do sitting at home. Most of our people survive by the day – selling small stuff in the market or labouring at construction sites, when they can find one. Our thinking around job creation must therefore be radically different from what it has always been. It is indeed a pipe dream to call for ‘value-added’ manufacturing because large entrepreneurs will only import machines that will minimise the numbers of people they will employ. New, innovative machines, powered by technology, are designed to render millions jobless. We need new thinking.

Well, I have a suggestion. I try not to criticise without offering a way out. What will I do differently if given the chance?

In the year 2015, I wrote a book titled Change is Going to Come. It was my cry for help to General Buhari. Most of the articles that made up the book had been sent forward to him in Aso Villa, without as much as an acknowledgement. Knowing that is very normal and not wanting the ideas to die and disappear, I decided to compile them into a book. The kernel of the book is to try and focus on ideas that could help Nigeria generate jobs. In generating jobs, we must understand our demographics. Now that entrepreneurship-for-survival has failed, perhaps we should be honest with ourselves to note that most of our working population are unskilled and often illiterate. What do we do with such millions? They cannot be expected to become coders. They may not understand digitisation, much less key into jobs in that sector. If they also become entrepreneurs, maybe through government loans, the fact is that purchasing power in this country is so low. Many so-called entrepreneurs soon pack up.

There are opportunities in some sectors, like agriculture, mining, and elsewhere, but new, inexperienced entrepreneurs may face fierce competition, or lack capital to make a headway. What is more? Nigeria does not need more than a couple of million of entrepreneurs. Joseph Schumpeter proposed that entrepreneurs must add value in order for GDP to grow. They must innovate something; start a new market, a new product or service or what have you. Our entrepreneurs here are in it because they have no choice. Lately we have an increasing number of young people who consider themselves traders of intangible assets online, and quite a number of them are misguided and have taken to crime.

What do we intend to do about the 13 million children walking all about Nigeria?… We must articulate a policy around this matter, in such a way that we can use one problem (unemployed graduates) to solve another (illiterate children). We also need more people in primary healthcare. COVID-19 had revealed our lack of preparedness.

I suggest a return to the basics; concentration on the provision of public goods. I have been saying this same thing for years, if not decades now. It looks easy, so one wonders why the government has not taken up the idea. Maybe because the idea takes much sacrifice from our leaders. What are public goods? Food security, health, education, physical and material security, environmental sanitation and safety, mass mobilisation, say, around the need for unity in Nigeria. Government should stand back and reconsider these issues and areas of intervention. We cannot be knocking our heads on the wall about entrepreneurship when bandits, kidnappers and all the evil men in between have rendered us into hermits in our houses. Most middle class Nigerians can no longer travel by road and that means that the space for imagination and engagement has shrunk. Egypt has one million policemen in a country of 100 million people. Nigeria has about 400,000 for 200 million people. Half of them are bag carriers for the wives of politicians. We, therefore, need more policemen. We need more men and women in the Department of State Services (DSS) and other agencies. The war on terrorism is a war about intelligence. What has happened to us? Why are we looking for things that are not lost?

What do we intend to do about the 13 million children walking all about Nigeria? Whatever is to be done, it is evident that these children have to be taught in class. This means we need hundreds of thousands of teachers. We must articulate a policy around this matter, in such a way that we can use one problem (unemployed graduates) to solve another (illiterate children). We also need more people in primary healthcare. COVID-19 had revealed our lack of preparedness. We begged that we focus on primary healthcare right from the beginning but that fell of deaf ears.  In all this, we must also be ready to be consistent and to persevere. One of our problems is distraction. We sometimes start nice policies and then promptly abandon them after a couple of years. In the book I mentioned above, I had a strong focus on the environment. I believe two million sustainable jobs can be created in the environmental sector immediately. Nigeria is dirty, uninviting, disorganised and disheveled for the most part. The day we present a different face, we will get respect, rather than receding as we are today, into confirmed pariahdom.

I suggested back then that we launch a programme themed ‘CLEANEST, SAFEST AND MOST ORGANISED COUNTRY IN AFRICA’, around which our youthful energy can be rallied. Those ideas haven’t changed. It is about resource allocation and substitution. We often believe that it is capital that we lack thus making our lives difficult. However, we have the human capital to substitute for physical capital at least up to an extent. Perhaps one day our leaders and those ‘experts’ they hire will stop the self-deceit. Time will tell.

‘Tope Fasua, an economist, author, blogger, entrepreneur, and recent presidential candidate of the Abundant Nigeria Renewal Party (ANRP), can be reached through topsyfash@yahoo.com.