Kidnappings: When Government Dances With the Devil, By Hannatu Musawa

Kidnappings in Nigeria persists because the benefits of the crime exceed the costs. 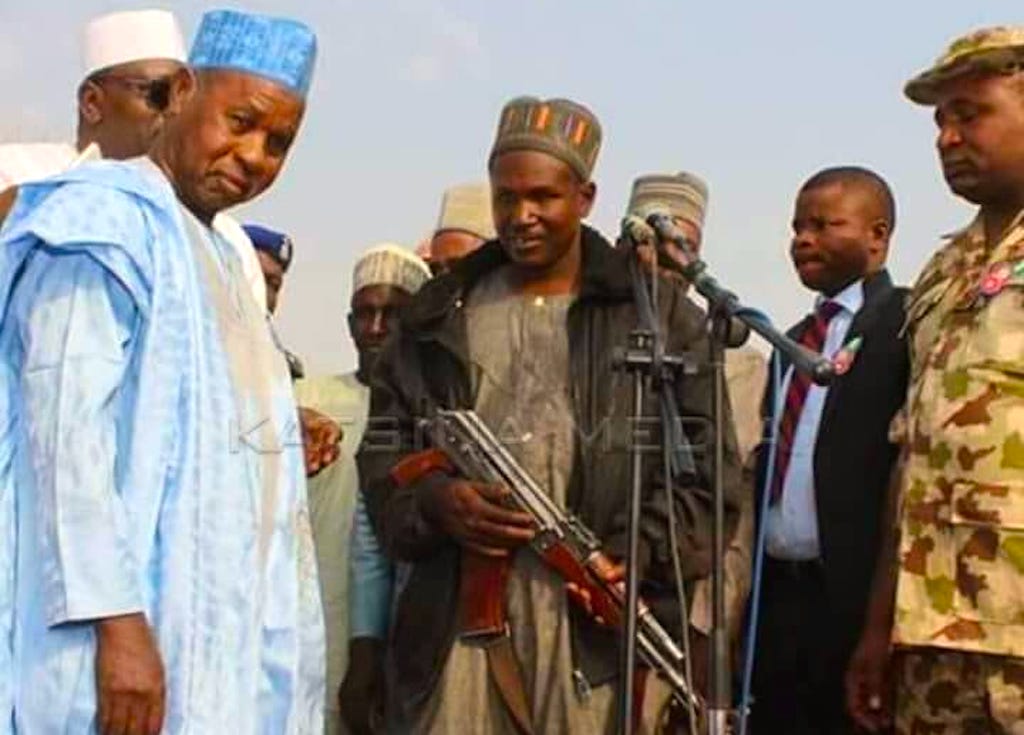 No matter their circumstance, bandits and kidnappers are criminals; in fact they are the devil’s incarnate. By formally negotiating with kidnappers and bandits, government isn’t shoring up the safety of the people, stabilising the state or punishing those who terrorise Nigerians, instead what it is doing is ‘dancing with the devil!’

When one ‘dances with the devil,’ it is suggestive of cooperation and the willful choreographing of one’s actions in coordination with a nefarious force, generally in order to advance a particular aim or goal.

According to an African proverb, “you have to heal the wound before it ignores the medicine.” The increasing spate of kidnappings and abductions across the country is becoming very worrisome and if not effectively tackled, may snowball into something that may consume us all. The recent abduction of school children from their boarding school in Kagara, Niger State barely two months after the abduction of about 300 school boys in Kankara, Katsina and that of over 300 school girls from Zamfara indicates that kidnappings or abductions are fast becoming a thriving industry.

According to data, last year, Nigeria had one of the world’s highest rates of kidnap-for-ransom cases. Other countries high up on the list included Venezuela, Mexico, Yemen, Syria, the Philippines, Iraq, Afghanistan and Somalia. Kidnapping has remained the most virulent form of banditry in Nigeria. It has become the most pervasive and intractable violent crime in the country.

It appears to have become a business, especially for unemployed youths. Unlike kidnappings, which, at times, take on a political dimension, such as those involving militants agitating against oil companies in the south, or Boko Haram in the north, the current wave spans every region in the country and is driven largely by economic hardship.

But, perhaps, the most disturbing aspect emerging from these kidnappings and banditry in Nigeria is the ease with which elements of the government enter into negotiations with the gangs responsible for these crimes in order to resolve them and free the victims. It is of vital importance to understand that negotiating with these devilish terror groups turns their crimes into a lucrative business.

The countless instances of abduction, which resolved positively for violent organisations have merely fueled the criminal activity in Nigeria, while providing new funds to arm and support gangs.

There is no doubt that the entering into negotiations with kidnappers and bandits by the authorities raises several types of problems: The recognition of these groups as acceptable counterparts; the setting up of precedents, encouragement of these criminals to persist in their methods, and getting trapped in relationships that may elicit more concessions than necessary. If the formal negotiation leads to a continued cycle of violence and rewards the terror groups with greater legitimacy, power and access, then the authorities should not use or normalise negotiations with them in any form.

In many Western climes, a ‘no negotiation with terrorist policy’ is often applied during hostage crises and it is mostly limited to not paying ransom demands. There are multiple motivations for such policies, including a lack of guarantee of the hostage’s safe return upon payment, as well as not creating an incentive for future hostage taking.

The prospect of kidnapping has now become a risk to us all in Nigeria because kidnappers are paid and are hardly ever apprehended. Commuting successfully between Abuja and Kaduna by road now warrants special ‘thanks giving service’ due to the notoriety of abductions in that axis. Birnin Gwari road in Kaduna State for travelers has become a nightmare and Benin-Ore Expressway is fast becoming a hub for kidnappings.

In the past, kidnapping victims tended to be the wealthy and the prominent, and so kidnappers had every interest in keeping their victims alive to extract the maximum ransom possible. Now, victims are often poor villagers, travelers or those in poor communities, who are sometimes kidnapped indiscriminately – a departure from the targeted kidnapping of wealthy people. They struggle to pay ransoms quickly because of their relative poverty, and victims are much more likely to be killed.

Many of those in authority are sitting comfortably in ivory towers and riding SUVs, seeming unconcerned about the current situation. It might be any of us being kidnapped today or tomorrow. We might feel secure in our gated communities or bullet-proof cars, but the moment one steps out of the comfort zone, one might fall victim. Children go to school, relatives go to the market; everyone of us in Nigeria is at risk of falling victim. Like Martin Luther King once said, “When you know something is wrong, but you don’t speak up, you become part of the problem and may as well be consumed by that problem.”

While securing every life is paramount, it is hard to subscribe to the formal negotiation tactic that is currently being employed by some factions of the establishment to ensure the release of kidnapping victims.

In many Western climes, a ‘no negotiation with terrorist policy’ is often applied during hostage crises and it is mostly limited to not paying ransom demands. There are multiple motivations for such policies, including a lack of guarantee of the hostage’s safe return upon payment, as well as not creating an incentive for future hostage taking. Many renowned security experts maintain that as long as a country consistently applies this policy on a no-exception basis, terrorists can anticipate that there will be no reward for trading hostages. This policy might just be what Nigeria needs to clean up the system.

It should be noted that kidnapping is a serious crime and has the potential for transforming into other felonious offences, such as physical violence, financial victimisation, sexual assault and murder. Our security architecture must think outside the box towards curbing this menace. The people perpetuating this crime are within the shores of our country; they should be fished out and apprehended.

In October 2020, a U.S. joint special operations force moved into Nigeria to rescue an American who was abducted by kidnappers who demanded a ransom from the man’s father. Why can’t our security forces replicate this feat rather than engage in negotiations where ransom will change hands?

Many security experts have attributed the rising kidnapping cases to a lack of manpower and poor logistics of the country’s security architecture. In reality, efforts to stem the abduction tide have also failed because of weak sanctioning and deterrence mechanisms. Kidnapping thrives in an environment that condones crime; where criminal opportunism and impunity prevail over and above deterrence.

The priority of government is to shore up the safety of the population, stabilise the state, avoid legitimising the group that attacked, punish those responsible, and remove incentives for future attacks by demonstrating that banditry and kidnapping doesn’t pay.

The kidnapping business is mostly perpetrated by criminal gangs and violent groups pursuing economic pay offs. These people are criminals and there should be no place for them on the negotiation table with authorities. Entering into negotiations does not necessarily end the violence, and it is a mistake to perpetuate the impression that it will. The cure presently enacted in Nigeria may just be worse than the disease.

There is nothing less disheartening than the so-called appeasement in the face of kidnapping, banditry and terror attacks on innocent victims, by entering talks with the perpetrators.

There is need for an urgent review of Nigeria’s current anti-kidnapping approach to make it more effective. Intelligence gathering and technology needs to be adopted in bringing this menace to a halt. And negotiations between the authorities and the criminals need to stop.

Since kidnappings in Nigeria persists because the benefits of the crime exceed the costs, the obvious solution is to raise the costs by imposing harsher, surer penalties on those who have commercialised kidnappings. The present punishment for kidnapping is spending between one to 20 years in prison, with the possibility of life imprisonment for extreme cases, such as murder. However, this is not enough. It should be reviewed immediately, with stricter measures, such as life imprisonment or a harsher sentence, not being completely out of place in dealing with the menace of kidnapping. After all, the crime of kidnapping is a maximum threat that requires an equally maximum deterrence.

The argument against the authorities negotiating with kidnappers and bandits is simple: Authorities must never give in to violence, and terror gangs must never be rewarded for using it. By engaging in violence against civilians, these criminal groups forfeit their legitimacy by breaching the conventions of debate required for negotiations. The authorities engaging with them would translate their violence into a legitimate means to be heard and, thus, lead other groups to engage in similar activities. Formally talking to the assailants would mean accepting such criminals as legitimate interlocutors, which gives them full recognition and would likely lead to increased attacks.

The priority of government is to shore up the safety of the population, stabilise the state, avoid legitimising the group that attacked, punish those responsible, and remove incentives for future attacks by demonstrating that banditry and kidnapping doesn’t pay.

No matter their circumstance, bandits and kidnappers are criminals; in fact they are the devil’s incarnate. By formally negotiating with kidnappers and bandits, government isn’t shoring up the safety of the people, stabilising the state or punishing those who terrorise Nigerians, instead what it is doing is ‘dancing with the devil!’