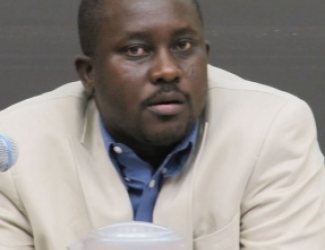 Early monday morning. Bacchanals in the corridors of power. After party atmosphere. We are in the palatial living room of one of the innumerable Presidential Guest Houses in Abuja. Hard liquor from every nook of the world competes for space on the centre table with leftover peppersoup from every cranny of Nigeria. Hints of exhausted Cuban cigars linger in the room. Under-dressed Aristo girls of every hue – depending on the efficacy of bleaching creams – and size loll lazily on the expensive rug. Half-opened Ghana-must-go bags reveal a roll call of dollars and pound sterling, unspent change from the party. The men in the room are in various stages of sleepy hangover. X Project’s “Lori Le” wafts across the room from a powerful gbedu sound system:

“Ruby, what’s come over you? Na which one be all dis Latin wey you dey blow here dis morning sef? You work for Aso Rock, not the Vatican?”

“For where? It is Yoruba. That’s the Yoruba botanical name for the proverb: a man crying can still see clearly through his tears.”

“Okay o. What are you crying about and what are you seeing clearly through your tears?”

“Can you ask them to excuse us?”

(Orontus barks orders and the girls disappear into various rooms.)

“Orontus, have you not heard?”

“The announcement by Madam”

“Which of the Madams?”

“Common Orontus, I’m in no mood for games this morning. She has just announced Mallam Nuhu Ribadu as Chairman of…”

“See me o, Renoks. Ruby rushed in to disturb my sleep with Latin dis morning just because of dat thing”

“You guys, you think this is funny, abi? The Petroleum Minister jumps up and makes this kind of announcement without…”

“Ruby, who told you she made the announcement without…”

“Of course, it’s from the very top. From Oga. You think Madam can just do that on her own?”

“So, the two of you were in on it? Sometimes I wonder what I’m doing here as Special Adviser on Media and Publicity. Things are always going on above my head. Even Renoks, whose office is ordinary Facebook, Twitter, and nairaland, knows more about things than me. Anyway, I hope you guys advised Oga about the consequences of this Ribadu appointment.”

“That’s why I said sunkunrunmus riranmus when I came in. I can see clearly through my tears what you guys cannot see with your clear eyes?”

“Renoks, this is no joking matter. You and Orontus are underestimating the extent of this disaster”

“Ribadu of course! His appointment is a disaster!”

How so, Oga Ruby?

“Renoks, don’t tell me that you and Orontus cannot see that he will embarrass Oga with his gra-gra. Between us, we all know how close members of the oil cabal are to Oga. We all know that they put him there. We all know that whether Oga goes through the ballot o or through tenure extension o, it is still the same people that will build our war chest for 2015. Is this the time to let loose that crazy man on the geese laying Oga’s golden eggs? You know he is going to take the job too seriously and go after them.”

“Enough, Ruby! You are such a slow learner!”

“Me? A slow learner? Okay o, Orontus, teach me what I don’t know about this matter. When the man starts hounding Oga’s friends, handcuffing and hauling them to court in Black Marias like he did to Tafa Balogun, I will be the one saddled with the unpleasant task of issuing statements to explain Oga’s closeness to those people in the first place.”

“You still don’t get it, Ruby, do you? This is a win-win situation for Oga. The man’s naïve gra-gra is precisely what Oga desperately needs to appear to be fighting corruption and the oil cabal now. We have explained to all concerned cabal members that there will be a little hounding and some noise making here and there, given the nature of the appointee but he will never be able to do more than that.”

“Orontus, you are forgetting the media! The man is a basket mouth who conducts media inquisitions. He will go to the media and call Oga’s friends names. He will call them the greatest thieves and the most corrupt people he has ever seen. He will indict them in the media. And people will believe him because he has tremendous public goodwill.”

“But that’s precisely what we need him to be doing between now and 2014, Ruby”

“I don’t get it. If we allow him to damage the cabal members between now and 2014, how are they going to be in the position to bankroll Oga’s re-election or tenure extension bid in 2015?”

“Renoks, I give up. Explain things to our friend, Ruby”

“Oga Ruby, don’t you know the man’s antecedents in the business of denying his past statements? Even statements you’ll easily find on Google, the man will swear by the Quran that he never ever made such statements. The list is very long: he denied ever indicting Madam Patience; denied ever opening a file on Oga when Oga was Governor of Bayelsa; denied ever calling Asiwaju the greatest thief in the world. He’s denied so many things. If it ever becomes convenient to deny having ever been the Chairman of the EFCC, the man will not hesitate to swear by the Quran that he has never ever heard of the EFCC in his life.”

“Renoks, I don’t see where you are going with this.”

“Be patient, Oga Ruby. By 2014 when he would have served his purpose, we’ll prey upon his talent for denial.”

“And how are we going to do this?”

“Okay, the man has been honing his international profile since he left the EFCC. He has been a darling of the West and the international community. He has done assignments for the UN and the European Union, abi?”

“We won’t need him and his gra-gra here after 2015 so we shall send him back to his people abroad as Nigeria’s Permanent Representative to the UN. We will dangle that carrot in 2014. Oga has already ratified that strategy. We shall tell him that for him to go to the UN, Oga must be re-elected or he must get tenure extension. And for Oga to be re-elected or to get tenure extension, his oil cabal friends must be fully operational. Trust me, the man will rush to the media and exonerate every cabal member he would have abused and hounded between now and 2014. He will swear and rave that he never called them thieves, never accused them of anything. He will claim that the allegations are the handiwork of mischief makers bent on heating up the polity, bla bla bla. You know the rest of his playbook.”

“Renoks, you are forgetting to tell Ruby one thing. Once we dangle the UN carrot, our friend will also do everything to checkmate that ambitious Nasir El Rufai who is a potential problem for us in 2015. They are no longer friends. Ruby, you really need to learn how we do these things.”

“Which kain yeye question be dat? Everybody uses him, why should our own be different? Everybody preys upon his lively innocence and amusing desire to go down in history as the man who moved mountains and singularly changed our way of life in the corridors of power. Baba Iyabo used him to fight his enemies; Yar’Adua used him temporarily before dumping him; Asiwaju used him mightily. By the time Asiwaju was done using him, the man denied three times before the cock crowed that he ever called Asiwaju the greatest thief in the world. Can the EFCC ever go back to that file? So, why shouldn’t we use him too? Why should Oga’s own be different?”

(Ruby bursts into a mighty laughter. Orontus and Renoks watch him in silence)

“OMG! OMG! This is lovely!! This is beautiful. You guys are evil geniuses, sorry, you guys are real geniuses. I was so worried when I got here but now I see you have this all nicely planned.”

“You know why we are watching you laugh?”

“It’s funny. It’s the irony. This same laugh that you are laughing now, that’s the same laugh we always laugh when we plan and make our moves and later read the syrupy progressive crap you used to write about those of us in government in your articles. We used to read you, laughing over peppersoup and beer.”

“Is my morning periwinkle peppersoup ready?”