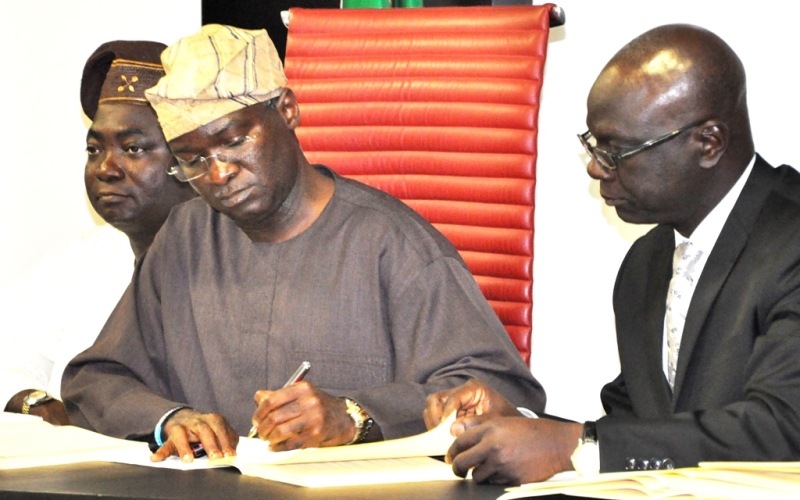 As the number of suspected and confirmed cases of the deadly Ebola Virus continues to soar, the Lagos State Government on Friday set up an isolation centre for patients who have shown symptoms of the Ebola virus.

This is coming shortly after the World Health Organisation, WHO, recommended the establishment of Ebola Treatment Centres and an enforcement of outbreak preventive measures, such as isolation and quarantine, be adopted as a matter of necessity in the handling of the Ebola virus in all countries affected.

The Isolation Ward is situated behind the Lagos Mainland Hospital at Yaba Lagos and is made up of tents that are fenced with planks.

Commissioning the hospital on Friday was the governor of Lagos State, Babatunde Fashola, the state commissioner of Health, Jide Idris, among others.

Two persons, a Liberian, Patrick Sawyer, and a nurse who treated him have died of the virus in Lagos.

Six others who came in contact with Mr. Sawyer, including a female doctor, have been confirmed to have the virus, while another suspected case has surfaced at the Nigerian National Petroleum Corporation, NNPC, hospital at Muri Okunola in Victoria Island, Lagos.

More than 70 people who came in direct or indirect contact with Mr. Sawyer are being monitored for the disease, while the six confirmed to be Ebola positive have been quarantined and receiving treatment.

The Ebola Virus Disease, which experts say causes multiple organs shut down, has caused the demise of over 900 victims in West Africa.

Health experts and epidemiologists suggest heightened personal hygiene including frequent and thorough washing of hands with soap, especially before coming in contact with any mucous membrane, avoiding and/or limiting handshakes and hugs, avoiding bush-meats and fruit bats which is believed to be the natural host of the disease.

Other suggestions include, constant disinfection of the environment with agents that include chlorine, avoiding bodily fluids of affected or suspected victims and being fully protected with personal protective equipment, PPE, to handle the Ebola victims or Ebola dead.