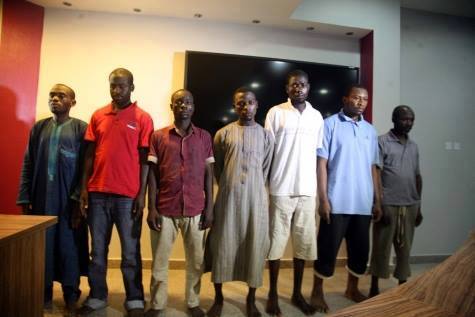 The Sheikh Albani Case and the Doubting Thomases, By Fatima Goni

Within a week many developments occurred in a jiffy. From the arrest of the suspected killers of Islamic Cleric, Sheik Adam Albani, to attacks in the North-Eastern states and now to the recent warning signals from the Defence Headquarters on alleged sympathizers and backers of terrorist groups.

It is not funny especially for some of us who have relatives including spouses serving in the security agencies in the country. When members of the security forces are deployed to the dangerous zones, we wonder if they would return alive and in whole. On the other hand if they are in safer zones, the fear of anticipated redeployment can run shiver in our spines.

Going through some social media, one could easily read doubting Thomases on every actions of the security personnel on the ground. Reports quoting eyewitnesses are more regarded than statements from official spokespersons.

When the Department of States Security Service (SSS) in Abuja paraded seven arrested members of ‘Boko Haram’ over the killing of popular Zaria-based Islamic cleric, Sheik Adam Albani, some postings in social media expressed too much doubts.

It could be recalled that Sheik Albani, along with his wife and son, were killed in Zaria, Kaduna State, while returning from a preaching session at Markaz Salafiya Centre, Tudun Wada Zaria.

The spokesperson of the SSS, Marilyn Ogar, not only announced the arrest, she gave permission to journalists at the head office of the service to ask the suspects questions. From the countenances of some of the suspects, one could easily read lack of remorse, apart from the fact that most of them confessed to planning and killing their victims.

Among the suspects was a graduate of English Literature and a sub-regional commander of the sect in Kaduna/Niger states axis.

Meanwhile in another story, the Chief of Air Staff was reported to have led assaults against the Boko Haram sect in North-East. It was reported that incensed by the rising number of deaths and galvanized by the barbaric acts of the insurgents and the need to lead by example, Air Marshal Adesola Amosu, personally entered the battle zone when he flew one of the Alpha jets of the 75 Strike Group of the Nigerian Air Force (NAF) to conduct air strikes against enemy positions along Borno-Adamawa axis.

As refreshing as the report was, surprisingly, some still doubted the veracity of  the courageous efforts of Air Marshal Adesola Amosu by claiming that his aide must have flown the fighter jet.

Despite the air and ground assault by the military, the sect’s onslaught on North-eastern Nigeria continued unabated, while politicians and unknown eyewitnesses were busy dishing out gory tales about the inability of security forces to do anything to curtail the excesses of the insurgents.

Concerned about the rising verbal attacks on the security personnel on the operation and some sensational angle from various credible and not-credible sources, the Director, Defence Information, Major General Chris Olukolade issued a statement to caution those causing disaffection by their utterances on the nation’s security situations.

General Olukolade disclosed that the Defence Headquarters has noted with grave concern the inflammatory pronouncements by some highly placed persons in government and some apparently sponsored commentators in and outside the country who have consistently given false and misleading remarks to describe the disposition of troops in the ongoing operations.

He therefore pointed out that it has become clear that the sustained campaign is intended to demoralize the troops and give impression that the military is overwhelmed by the terrorist group. “This tendency,” he said, “is unfortunate to say the least.”

So far, the Defence Headquarters has restated that the Nigerian military cannot by any standard be overwhelmed by the insurgents neither will the devious antics of their sympathizers and sponsors demoralize the fighting spirit of troops.

Before the arrest of the suspected killers of Sheik Albani, some of the students of the late cleric were skeptical about the possibility and sincerity of security agencies to unravel the mystery and arrest the culprits. It is heartwarming that the students are now singing new tunes over the arrest. Dr. Abdulganiyu Abdul-rafi’u, one of the frontline students of late Sheikh Adam Albani commended the security agencies for the speedy investigation and operation in apprehending the suspects. He added that since the suspects claimed to be Muslims and that they allegedly carried out the act in the name of Islam, the SSS should take them to the Shari’ah Court where they could receive what they deserve.

While we should encourage our security personnel to abide by the rules of engagement where necessary, they should also be transparent and sincere in relaying information to the public. We should be receptive and responsive to official positions, especially from the designated and professional spokespersons who don’t play propaganda. We should discountenance the propaganda messages of the terrorists and their conscious and unconscious backers alleging the inability of Nigerians troops to handle the insurgency.

By the way, I always ask this question: Are our security personnel not like everyone of us who are human and deserves and support to put in their best?