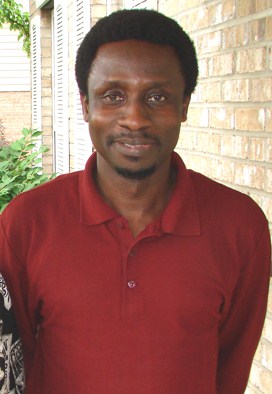 Encountering Amiri Baraka On His Turf, By Akin Adesokan

[NOTE: This essay was first published as part of a longer piece in January 2001, and has been revised in light of the passing of Amiri Baraka]

The wiry, slightly stooped man leaps on the stage, clutching a sheaf of papers. Spectacles peering beneath an Elvis Presley cap, face framed by a sparse salt-and-pepper beard and sideburns, he cuts the image of a celebrity professor, at once distracted and self-absorbed. He has a restless, somewhat enigmatic presence, and the constant cheer of the mainly African American audience swallows him as he rummages in his papers, humming and grunting out of habit.

This is Imamu Amiri Baraka, foremost playwright, polemicist, political activist and performance artist strutting on the same podium that Hunter Rawlings III, the President of Cornell University has just left. He is about to read his poems, the big masquerade bringing up the rear at the grove.

Earlier, some members of the Black Arts Movement, the historic movement which brought radical politics into African American poetry and drama in the Sixties have given performances. Haki Madhubuti, poet and publisher of the Third World Press in Chicago, is the first at the podium. He talks briefly about the enthusiasm of the BAM, referring to his own change of name: he had picked Madhubuti without knowing what it meant. But at least, it was African and it relieved him of the burden of history that his English name had heaped on him.

The occasion that brings Baraka and others to Cornell in early October 2000 is a conference marking the thirty years of the foundation of the BAM. “Blackness in Color” is a three-day carnival, complete with an exhibit, readings, a concert, panel discussions and celebrity presences, including Faith Ringgold. Many people at Cornell, myself inclusive, have looked forward to Baraka’s visit. As an undergraduate at the University of Ibadan, I’d been impressed by his work, and chosen four plays as case-study for my final year long-essay. I can no longer remember how I came by his address but I remember writing him about my thesis, and raising some questions about his work.

I had very little hope of a reply and was surprised when, a few months later, a letter arrived from the US. Baraka had painstakingly gone through my letter, written a reply and sent me materials on his current concerns. This was around May 1990. I’d tried to keep the contact open, sending him a copy of the thesis through a US-based Nigerian professor visiting Ibadan, but I am not sure it got to him.

Baraka is stalking the stage like a panther. He hasn’t started reading. Politics is the blood in his veins, so he must first politick. “I’m here to do my duty (pronounced “dooty” in that particular tone of black voice) as a progressive Communist. Please don’t vote for Nader, because if you vote for Nader you let them stupid rednecks get into power. Vote for Gore!” (It is but a month before the general elections that would be remembered for “Florida recount”, “hanging chad,” and “Bush V Gore.”) Laughter of approval rises from the audience, spiced with heckles of “Right-ons.” Baraka is restless at the podium, standing at an angle toward the audience.

His reading consists of a number of short poems. One plays on the American predilection for turning important historical figures into items of consumerism. The speaking voice talks about Lincoln, but the person the voice addresses thinks in terms of the automobile brand. Another poem is a “low-ku” (according to Baraka, an inversion of the Japanese form—haiku), and it goes like this:

Is it not fair to assume

That they are most

Some less-known poets come after him, and the space left for Sonia Sanchez is conspicuously vacant. Reports say her father is ill, and she has to be at his bedside. (Three weeks later, at the birthday conference for Chinua Achebe, she holds her own reading, a soul-stirring, standing-ovation-earning performance in the finest tradition of the BAM.) Baraka is the most popular of this group, because he is also a provocative playwright and an insistent speaker or race matters who often got into trouble for his views.

Earlier that evening, as he meanders among the tables and desks for a helping of wine and cheese, I approach him and introduce myself. He has troubles remembering, but is trying. Then someone comes to whisper to him, and leads him down to the hall where the readings are to take place. Knowing he would be around for three days I bide my time.

After the readings, there is a concert. Several musicians perform, but the attraction remains Baraka, who reads his longer poems to the tune of B.B. King’s “When It All Comes Down.” This is performance poetry, the real rousing stuff. In the 1970s, Baraka collaborated with some African American performance-poetry groups, especially The Last Poets, travelling round the US and performing the works of the BAM poets using jazz bands which prioritized African instruments.

Throughout this night’s performance, punctuated with quotations from Malcolm X, Langston Hughes, and others, Baraka executes stage acts typical of jazz celebrities. By turns taciturn and ebullient, he moves freely on stage, frequently backing the audience in that Miles Davis sort of way. He is playing, having fun. His Blues People is one of the most authoritative books on African American music. Except that now, music not being his forte, he is not the big masquerade, and performances continue after his exit.

The following morning, contrary to all expectations, Baraka is gone. I can only write him again, as I did eleven years ago.

Professor Akin Adesokan teaches Literary Theory and African and Afro-American Literature at the University of Indiana in the United States.

Ezekwesili cautions against forceful removal of Sanusi as CBN governor

Professor Adesokan teaches comparative literature at the University of Indiana, Bloomington, where he is also the director of the undergraduate program.