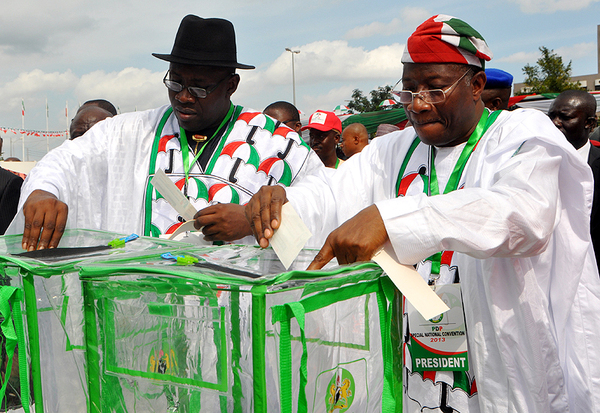 How Jonathan Plans to Win 2015 Election (1), By Aminu Gamawa

If you think President Goodluck Jonathan has no plan or strategy on how to win the 2015 presidential election you are dead wrong. I just finished reading a document produced by Goodluck Jonathan’s political advisers and strategists.

The title of the document is “2013-2015: Political power and governance road map.” It is a carefully written document that identified and analyzed the strengths and weaknesses of President Jonathan, and his chances of winning the 2015 presidential election, if he decides to contest. It is the good, the bad and the ugly of how Jonathan and his team will approach 2015.

In the introduction, authors of the document acknowledged that a new political order has emerged which seriously pose a threat to the political order created by Jonathan and his team. According to the document, “The public perception of government, the tension and contradictions within the PDP, extremist insurgencies and grave national security concerns, and desperation by the opposition parties to cobble together a mega-party are concrete indications of the struggle between an old and a newly constituted national power arrangement.”

The authors alleged that “there is sufficient evidence that attests to a well-oiled grand strategy to diminish the person of Mr President and the institution of the presidency, sabotage and impede the efficient execution of public policies, distract and compromise key institutions, and ensure a chaotic and unpredictable outcome in the 2015 general elections. Because these forces are critically entrenched in the key organs of the PDP, in the NASS, among the ranks of the party’s governors, in the media, within dominant ethnic and regional political formations and violent non-state actors, this struggle will become more acute and intense as the nation plots its political graph and trajectory to the 2015 general elections.”

The document started with a Strengths, Weaknesses, Opportunities and Threats (SWOT) analysis of the person of President Jonathan and the “new national power center he has constructed.” The following is directly from the document.

Strengths
•Power of incumbency and utilization of governance machinery, especially the careful and legal deployment of its propaganda and coercive apparatuses

•Secure financial resources base and leveraging on strategic media assets

•Formidable political apparatus—a reformed, disciplined and tightly controlled PDP—with significant presence in all the 36 states and dominant control over 23 states

•The perceived appropriation of presidential advocacy space by exuberant partisans and fanatical supporters who project a wrong image of the presidency as a regional agenda. This situation tends to alienate moderate political forces across the country whose sense of co-ownership of the presidency appears diminished

•A perceived sense of distance between the Presidency and the PDP that has opened the space for internal dissention and outright rebellion by party stalwarts. This sense of disinterest and disengagement has engendered a culture of apology among Presidential spokespersons whenever matters connecting Mr President and the party appear on the public sphere

•Following on the above, the reality of Mr President being the leaders of the nation and the LEADER OF THE PARTY is not sufficiently grounded

•A technocratic cabinet that is not fully politically engaged, especially in media advocacy and community-wide outreach programmes. This unhelpful situation out burdens a handful regime insiders in their constant defense of The Presidency and the Transformation agenda

•Inability of Presidential power strategists to manage the relationship between The Presidency and the NASS to the degree that the later, particularly the HOR, which is dominated by the PDP, appears as an outfit and mouthpiece of the opposition

•Problematic relationship between the Presidency and some former heads of State when, in actuality, they should constitute the bedrock of his support

•Exploiting the opportunities inherent in the putative fracturing of the Northern Governors’ Forum by strengthening co-operative governors and sustaining pressure, directly and through different front organizations, on the recalcitrant governors

•Playing on the political ambitions of regional champions, especially in the North, to the degree and extent that no unanimity of political purpose and cohesive agenda is ever achieved

•The APC may appear as a formidable threat initially but substantive opportunities will abound when ambitions and egos clash among its principal promoters. Strategic planning should factor in the scenario in the designing of intervention blueprint

•Exploiting the immense public opinion opportunities in the current war against terror in the North, especially given the steady successes thus far recorded by the NSA, and the military high command through the JTF

•Utilizing the social and economic empowering and inclusive space provided by SURE-P, particularly its integrated community empowerment schemes, to advertise and show case the populist and pro-people orientation of the government

•If the APC does not implode along the way, it will constitute a real threat to the PDP and Mr President

•Extremist insurgencies in the North and the burgeoning oil theft in the Niger Delta are already sources of concern and worry; the way and manner these issues are dealt with will determine the degree to which they will pose a threat down the line

•Regrettably, the current, crisis-ridden state of the PDP poses significant threat to the realization of the party’s political ambition in 2015, including that of Mr President.

The SWOT analysis above is just a small excerpt from the document. The document was written after the New PDP was created but before the G5 and members of House of Representatives defected to APC. The rest of the document is an in-depth analysis of what the PDP and President Jonathan should do to win the 2015 elections. This include changing perception of Nigerians through propaganda, establishment of a political intelligence unit, reforming PDP, fund mobilization strategies, causing political division in the North and South West, appointing politicians with grassroots support as ministers, deploying SURE-P for political purposes, using the civil society organizations and professional organizations, increasing the number of registered voters in South-South, North-central and South-East, and reducing the number of voters in the North and South West, etc.

Mr. Gamawa is a doctoral candidate in Law at Harvard University.