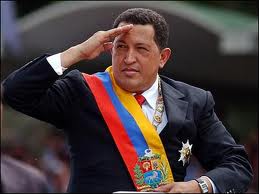 I am one with all the poor, marginalized, exploited, and working peoples of the world, for whom El-Comandante represented hope, in mourning the passing of this extraordinary personality, and in celebrating his life and legacy – the Bolivarian Revolution, whose aim is to build Socialism of the 21st century!

Chavez, the revolutionary movement he led, and the revolutionary process that that movement has unleashed in power are integral parts of the dynamics and dialectics of the global resistance of the world’s poor and working peoples to the ravages of global capitalist system. And as an integral part of that revolutionary process, Chavez, the revolutionary movement he led, and the Bolivarian revolution are also caught up in the contradictions of the process. In that sense there are quite a few things about the extraordinary and iconic personae El-Comandante’ as well as about the process of the Bolivarian revolution that one may disagree with, and which have the potential to limit the process of empowering the mass of the people and building their autonomous power. Certainly the iconic leader in becoming the symbol of the revolution also tended quite often to substitute for the independent activity of the people.

Nevertheless, given where Venezuela was coming from, given its history of the brutal domination of the oligarchs, the Bolivarian revolution marked a remarkable break with that past, and constitute revolutionary leap forward.

And the revolution did actually transform the lives and conditions of the poor, as well as of working peoples. No matter what else imperialism may say about Chavez and the revolution, they cannot erase the fact that by their own evaluation, the Bolivarian revolution has halved poverty in relative and absolute terms in Venezuela in just 14 years! And this feat happened in the teeth of a most grueling class warfare waged by the wealthy ruling class who saw their greed, privileges and unfair advantages being curbed.

For investing in accessible housing, education and healthcare for the poor and working people, he was called a ‘Polarising’ figure; For markedly improving the living, working and existential conditions of the overwhelming majority of citizens, he was dubbed a ‘Divisive’ personality; And for opening up the political process and governance institutions to the poor and working peoples, he was branded ‘Authoritarian’ Populist!

To be sure when imperialism in pursuit of individual enemies, who were created and hitherto propped up by imperialism, decide to wage full scale merciless wars on entire countries, laying their meager infrastructure to ruins, and sending them back into the dark ages, they are not violating human rights! But when the Bolivarian revolution curbs the nefarious activities of monopolies, TNCs and the oligarchs, the revolution is violating human rights.

When the wealthy ruling class demolish the homes of the poor and evict them from cities as they are fond of doing in Nigeria, they are not ‘Polarising’ figures? When they criminalise and ban the livelihoods means of the poor; chase, harass, brutalise and jail them routinely for trying to earn a living not by stealing; they are not ‘Divisive’ personalities! And certainly they are not violating human rights. Afterall are the poor humans? So how can their human rights be violated?

To be sure as we march towards 2015, and as we continue to proclaim our solidarity with the poor and working peoples; as we continue to insist on promoting their interests and transforming their conditions; we shall also be termed ‘Polarising’ figures, and ‘Divisive’ political parties! We know this will come, we welcome and embrace it!

Boko Haram: CAN disagrees with Sultan over amnesty plea