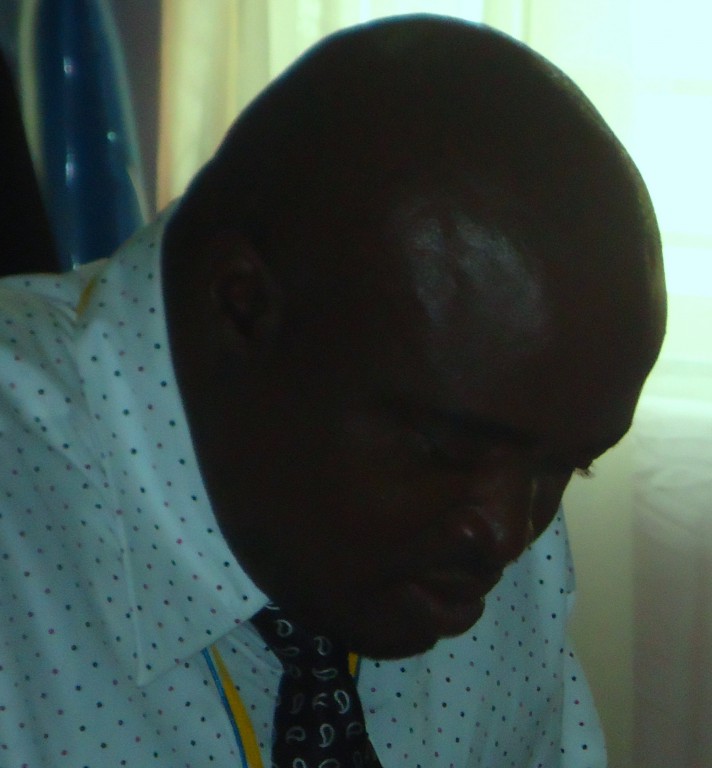 He feigned ignorance of everyone, and all that was happening around him. Seeming half awake, and indifferent to it all, with his barely cleft eye, John Abba Ogbodo pounced on the man holding the gun, grabbed the armed robber, pressing his two hands to the marauder’s body, with all the might and power within him.

It was like a James Bond movie.  Seven years ago, today, but it remains vivid even now how Ogbodo, single-handedly, disarm the robber. It was in broad daylight, at Area 3 Garki Abuja.

This was, therefore the story of how the shortest man in the crowd, with the smallest physical endowment, laid down his own life to challenge a robber.  Such daring, such courage, such self-negation, for the common good, defined the essential outlines of the life of John Abba Ogbodo.  Yet, when people sought to confirm the strange encounter with him, Ogbodo in his typical humility, simply made a light joke about it. It was the quintessential Ogbodo.

It is such a cruel irony therefore to hear now that this same hero of a quiet, priceless, community life has been cut short in a car accident.  Yet I can go, on and on, recalling the valor and selflessness of this extraordinary man, even though these facts only deepen the pain of his absence today.

Sometimes in 2005, a band of robbers chanced on some information that the son of a former Police Inspector General had some cash at home. But the robbers got more than what they bargained for as the scion on the former police IG engaged them in a horrendous gun battle for about 30 minutes. This turned Jos Street, in Garki Area 3, the first Fleet Street of Abuja, and its many watering holes into a virtual war theatre. It was about 7: 30 pm.

I watched from the first floor of my office as policemen docked by my car, to escape the robbers’ firepower. Again it was John Ogbodo’s call that saved the day, no sooner had he put a call through to police authorities, than crack anti-robbery policemen from the Police IG squad, arrived to chase away the robbers.

The immense courage of my friend was often defined at the edge of tragic experiences.  One cold night in 2008, as l drove through Area 10, l sighted the diminutive Ogbodo, in a heated argument with some policemen at 10 pm on a lonely road. What was Ogbodo’ grouse? A man had driven in a manner dangerous to other road users. The freedom fighter that he was, Ogbodo pursued the ‘big man’ from the Defence Headquarters (Ship House) until both leveled up by the police checkpoint, by the Post Office.

Unwilling to offend the “big man” the policemen turned on Ogbodo in a classic logic of the hunter becoming the hunted. Our man stood his ground in impressive performance! Policemen were confused, wondering why and how a man with no weapon could be taking on four armed police officers, at night of all times. One of them asked that he be warned that he does not try that outside Abuja city!

Such acts of courage against injustice and anything that impinges on his dignity defined the earthly sojourn of the essential   John Abba Ogbodo.

You might disagree on several issues with John Abba Ogbodo, but you could not question his grit, his tenacity of purpose, and his determination to make a success of his journalism career or his life on purely personal terms.

He worked so hard. But he also relaxed on his own terms. After turning in so many copies. Ogbodo’s sport car was a usual site at the receding hours of the day at one of Abuja’s numerous watering holes. He loved to relax and crack jokes.

Though a political reporter for so many years, he has an acute understanding of issues that shape and define the world.

Over a decade ago when Osama Bin Laden led his ragtag band to humiliate America on her own soil, Ogbodo though sad at the event, located the defeat of the US in the mythological realm: ‘America will never get over that attack. It is psychological defeat. It is God’s punishment for their arrogance. Empires come and go. At a time, the Greeks dominated the world. At another time, it was the Romans. The British did too. Americans are misusing their own dominance of the world today. That was why God brought a Bin Laden, he would say.

“After the Americans, world power will go to China, after wards, it will come to Nigeria” he ruled, some inscrutable self-assuredness coursing through his voice, then he poured the last bit of the green bottle and tapped: Gbadamo—as he often called me, we go see tomorrow now.

When you banter and ask about life, Ogbodo was never to be beaten to a riposte, he often shot back:  ‘It is not bad. But can you add value?

Two years after I began what looked like a one year sabbatical at the Federal Inland Revenue Service, FIRS, Ogbodo was one of the few reporters in Abuja wouldn’t mind putting a call through at 9:30 pm on a Friday—just to confirm the second name of an old Peoples Democratic, PDP official or an event that took place five years hence.  He was meticulous in ensuring that any copy that adorns his name must be correct.

For over a decade at the PDP Secretariat, -Wadata Plaza in Abuja, Ogbodo was a regular sight, having earned the confidence of his boss, Martins Oloja, who has a knack for smelling a good copy 50 miles away.

In 1997, some American clergymen were in Professor Jerry Gana’s Office at Radio House, Abuja, ostensibly on a troubleshooting mission for Nigeria’s fledging democracy. It was a Federal Government counter move to the havoc NADECO was wrecking on Government’s image in the United States and in the West.

A reporter asked for a list of the clergymen and their affiliations. A perusal at the list and addresses showed many were businessmen. Ogbodo tormented the hefty men from the US with several questions.  A piece l did: Contractors in Cassocks in The NEWS magazine, opened with the personae of Ogbodo as a short man who often grow tall at press conferences with the quality of his questions.

Though it was some four years later before he joined the ranks of the ‘red-necks’ in Political Reporting in Abuja, –like Jacob Edi and Ben Agande, want to say– in less than three years, he had demonstrated that the confidence Martins Oloja had in him for giving him a place at the Guardian was not misplaced after all.

Ogbodo however maintained a unique presence in that crowd. When you pull a call to him between 5 and 7 pm, he was always quick to quote Debo Adesina the former Editor, The Guardian’s rhetorical question: ”Will you publish that story on your shirt?” Let me turn in my copies first, was always his plea.

A grassroots person, Ogbodo never allowed himself to be swallowed by the trappings of the city. And so when he was to be married to his beautiful wife, he insisted it must be in Benue. And off to Adoka in Otukpo Local Government Area of Benue state we all went.

So locked in my brain is the real people we encountered at Adoka, who radiated a humanity so warm that when I ran into Ogbodo at the Senate public Hearing on the Federal Capital Territory Property Tax, some five weeks ago, I was quick to ask that I want to see him do the Agliyen dance steps again.

In the PDP correspondents’ league for so many years, –and for most part of the last decade, Ogbodo was a prominent member of the BOT, as we often like to address red necks (older reporters) in the PDP league. Though membership changed over time, Ogbodo was a constant figure, as was Chairman Paul Mumeh, Jacob Edi, Chuks Okocha, and Chuks Akunna, whose fluency in Yoruba, Igbo and a bit of Hausa, and his street wisdom enabled him meander through sources, colleagues and several political turfs. There was also Yusuf Alli, and later Musikilu Mojeed.

As we mourn Ogbodo and the sad and unfortunate way he ended a honourable journalism career, it is hard to forget the dignity, with which he managed his trade.

Confident, surefooted, with a self-assured voice at the mic and bereft of a cringing mentality and sacredness of facts and forever crosschecking narratives and sequences of events, Ogbodo was a pride to the journalism profession. He was a veteran of many night vigils all on the trail of good copies and picturesque descriptions.

Younger reporters need re-read his copies and imbibe some of the traits that enabled the management of The Guardian to repose so much faith in him. Younger reporters could also have sipped from his conduct—that I can do it spirit, that I’m no slave to you spirit that enabled him to related to several members of the lower and upper parliament as equals not some cringing, mendicant folks always looking for crumbs at the expense of copies that could shape events and the future of our great country.

Wahab Gbadamosi, a former editor, is currently the Assistant Director of Communications and Liaison at the Federal Inland Revenue Service, FIRS, Abuja.

Reclaiming Nigeria in 2015: Can the Youths Go It Alone? By Abubakar Usman