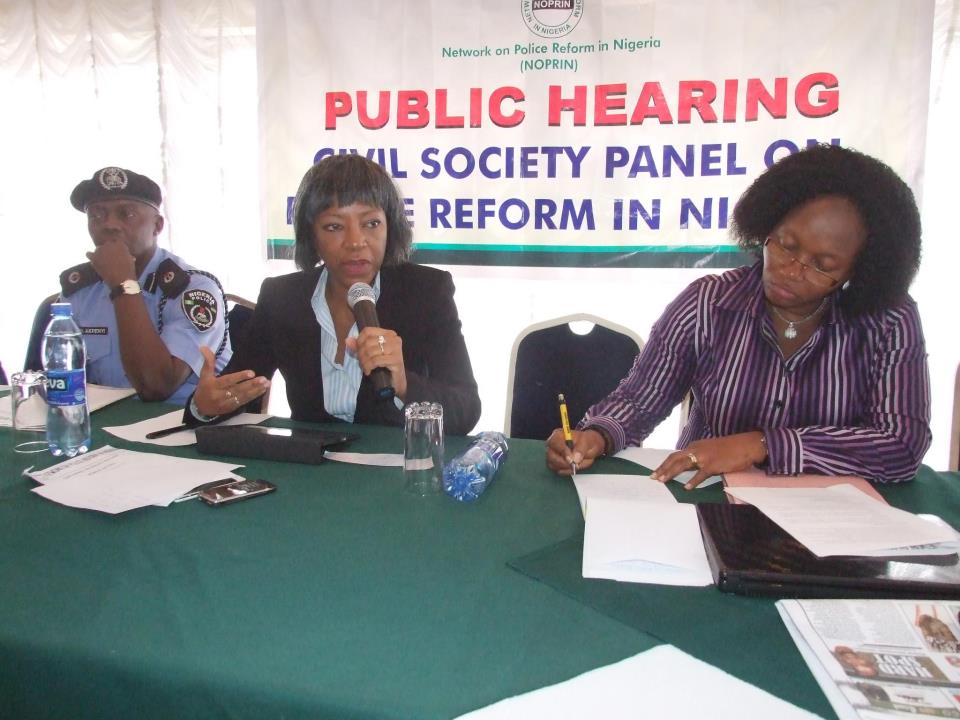 Constitutional Angle to Changing the Nature of the Nigeria Police

This is a first part in a series discussing police reform ideas as articulated by the CSO Panel.By Chinedu Nwagu

Preamble: The Civil Society Panel on Police Reform was set up by civil society organisations working on police reform issues, under the auspices of the Network on Police Reform in Nigeria (NOPRIN) to complement the efforts of the Mr. Parry Osayande-led Presidential Committee on Police Reform by facilitating civil society input into the efforts of the government to transform the Nigeria Police into a service-oriented and accountable public institution in Nigeria. This series examines key issues on police reform in Nigeria, especially those requiring constitutional amendment. They are based on recommendations from the report of the CSO Panel and the memorandum submitted by the Panel to the Senate and House Constitutional Review Committees.

82 years after its establishment in 1930, the Nigeria Police has endured and survived several legal and political changes in country. Some of these, particularly the long years of neglect under military rule, have left it a shadow of the institution it should be. Since the return to democratic governance in 1999, there have been some efforts by the government to reform the police, albeit with no substantial results in terms of actually transforming the institution. The last and most recent of these reform efforts was the Parry Osayande-led Presidential Committee on Police Reform, which was inaugurated in February 2012 and submitted its report to the President in August 2012.

In March 2012, key civil society groups working on police reform issues, who were of the view that police reform was too important a task to be left to the government alone, also set up a parallel but complementary Panel to the Osayande-led Committee – The Civil Society Panel on Police Reform in Nigeria (CSO Panel). The CSO Panel made a number of practical recommendations in its report for reforming the police which, if implemented, would have far-reaching impact in transforming the Nigeria Police Force into an effective, accountable and service-delivery oriented public institution. This piece, the first in a series discussing police reform ideas as articulated by the CSO Panel, examines the need to change the nature and nomenclature of the Nigeria Police in the on-going constitutional review process.

Two overarching issues arise from Section 214 (1) above. First, the Constitution envisages the creation of a Police ‘Force’ for Nigeria. This speaks to the nature of the institution. Second, the nomenclature of the institution is also aligned with a ‘Force’ orientation as the Nigeria Police Force. The idea of ‘Force’ with regard to the Nigeria Police made total sense during the colonial and military era and aptly described an institution targeted at subjugating and subduing an already oppressed people. However, it has absolutely no relevance in a democracy where, according to Section 14 (2) (b) of the Constitution, the primary purpose of government is the “security and welfare of the people”. The term ‘Force’ presupposes institutions whose foundational philosophy is coercion and not consent, whose mission is conquest and not service, and whose approach is expeditionary and not community based. In a democracy, this is an aberration! The name Nigeria Police Force also conveys the sense of a ‘militarized’ institution, and not one whose core responsibility is the protection of the lives and properties of the citizenry of the state. Policing a democracy demands a shift from a ‘Force’ philosophy to one of public service, respect for human rights and the rule of law.

For any police reform effort to be meaningful, it must commence by addressing this fundamental flaw in the conception of the police as an institution of force and not a service delivery institution. The CSO Panel noted in its report that previous investigations into police reform, such as the 2002 Presidential Panel on National Security, had recommended that the police be transformed into a service. However, these recommendations needed constitutional amendment and were not implemented or put into effect by government.

The on-going constitutional review process presents an opportunity to get it right. By changing the name of the Nigeria Police under Section 214(1) of the Constitution, we will be laying the proper legal and constitutional to redefine the doctrine and philosophy of policing in Nigeria into one that is civilian-friendly and people-focused; and the practice of policing to one that emphasizes the service component, social responsibility and respect for human rights. Replacing the word ‘Force’ with ‘Service’ will serve as a constant reminder to the police, as well as to the public, that they exist to serve society. It necessitates a doctrine and philosophy of policing in Nigeria that must be reformed to accommodate democratic input and which defines the basis of policing in Nigeria as being citizen-focused with a service mission. The CSO Panel thus recommends that Section 214(1) of the Constitution should be amended to change the name of the Nigeria Police Force either to the Nigeria Police Service or simply the Nigeria Police. This would be the first major step in the right direction.