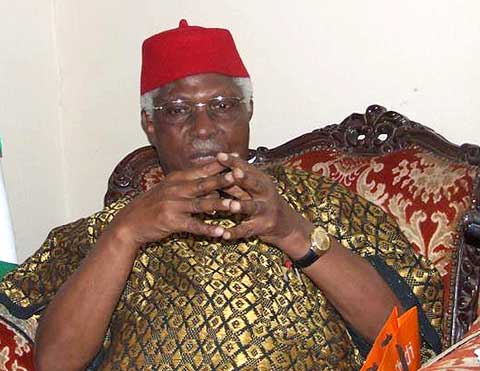 Ekwueme did not become President and today, may not even be powerful in the party he founded but the ideas he put forth will serve this country well

For Ekwueme, a timely birthday gift from Atiku, By Chudi Offodile

The annual awards and lecture of the Leadership Newspaper held at the Sheraton hotel, Abuja, on the 18th of September, 2012, provided an opportunity for Turaki, Atiku Abubakar [GCON] to present, what I consider, a befitting and timely birthday gift to Dr Alex Ekwueme [GCON], former Vice president of the Federal Republic of Nigeria [1979-2003], who turns 80 on October, 21, 2012.

Atiku Abubakar, himself, a former Vice President of Nigeria [1999-2007] while reviewing the structure of the Nigerian state at the event, had this to say: “I also want to recall that during the said 1994-95 constitutional conference, Dr Alex Ekwueme [GCON] former Vice President of the federation, introduced and canvassed for the concept of geo-political zones. I was among those who opposed it because I taught that Ekwueme, coming from the defunct Republic of Biafra, wanted to break up the country again. Dr Ekwueme obviously saw what some of us, with our civil war mindset, could not see at the time. There is indeed too much concentration of power and resources at the centre. And it is stifling our march to true greatness as a nation and threatening our unity because of all the abuses, inefficiencies, corruption and reactive tensions that it has been generating.

Continuing, he said: ‘There is need, therefore, to review the structure of the Nigerian federation, preferably along the basis of the current six geo-political zones as regions and the states as Provinces. The existing state structure may not suffice, as the states are too weak materially and politically to provide what is needed for good governance’.

Atiku Abubakar may not have intended his remarks to be a birthday gift but I am convinced that it is a precious gift that is timely and befitting, because at 80 years, Dr Ekwueme has played his part as an architect, a successful one, a politician who became Vice President and a statesman who crafted an intelligent way forward for a country he truly loves. Ekwueme’s idea connects to our history in a special way. It reconciles our past with the present and offers limitless opportunities for a bright future for Nigeria.

Atiku’s intervention marks a remarkable and fundamental shift in the ‘thinking’ of the northern political establishment. Former military President, General Ibrahim Babangida has in the past suggested that the country needs to be restructured. Even General Buhari’s Congress for Progressive change, made restructuring of the federation, an issue in the last campaign but Atiku was direct and specific. He acknowledged the need to review the structure of the Nigerian federation, preferably along the basis of the current six geo-political zones as regions and the states as provinces.

Nigeria may be moving slowly but surely towards achieving a modus Vivendi on the question of restructuring. First is to cast away the ‘civil war mindset’ as Atiku has done and take a hard look at the journey so far. The way forward is a proper federal arrangement, a just and equitable power sharing formula that will command the loyalty of all Nigerians and pave the path for nationhood. The six geo-political zones as federating units is the best formula put forward so far in our long search for a stable system in post war Nigeria. Atiku Abubakar’s candour, rare to find in our country is quite commendable, although he was silent on the issue of rotation of power, the other leg of the Ekwueme submission at the constitutional conference.

Dr Alex Ekwueme was born on October, 21, 1932 in Okoh, Orumba North local government area of Anambra state. He completed his high school education at Kings College, Lagos on a government scholarship and passed the Cambridge school certificate examination with grade one in December 1949. He was one of the first four Nigerians to be awarded the Fulbright scholarship financed by the U S State department, following which he enrolled at University of Washington for the degree of B.Arch in Architecture and City Planning in 1952.

While pursuing his undergraduate degree in Architecture, he also earned a B.A in sociology in 1955. Concurrently, in June 1955, he sat for the B.A degree examination of the University of London as an external candidate in History, Philosophy and Constitutional Law and passed. He received his M.A degree in urban planning in March, 1957. He worked as an Architect in the United States, United Kingdom and finally in Nigeria where he set up the first Nigerian registered Architectural firm in Lagos in 1958. He was elected President of the Nigerian Institute of architects in 1965.

During the Nigeria/Biafra civil war, Dr Ekwueme returned to Eastern Nigeria [Biafra] and became the Head of planning of the Biafra National Airports Board. He obtained his doctorate degree, Ph.D in 1978 from the School of Architecture, Building Science and Planning of the University of Strathclyde, Glasgow, Scotland. Once again, concurrently with his Ph.D research work, he registered for and obtained the L.L.B degree of the University of London in 1978.

Dr Ekwueme was elected Vice President of Nigeria in 1979 as running mate to Alhaji Shehu Shagari on the ticket of the defunct National Party of Nigeria, [NPN]. They were re-elected in 1983 but were overthrown in a military coup in December of 1983. Several of the civilian leadership went on trial before a military tribunal set up by the military junta led by General Muhamadu Buhari. It is a tribute to Dr Ekwueme’s incorruptibility that the panel announced publicly, after all investigations, that Ekwueme had left politics poorer than he was when he entered it and that to ask for more from him was to set a standard which even saints would be unable to meet.

Dr Ekwueme’s next political outing was as an elected delegate to the 1994-95 national constitutional conference where he served on the committee on the structure and framework of the constitution and where he made the ‘prescriptions’ for a durable and stable polity known as the six zonal structure. In April 1998, he led a group of eminent citizens popularly referred to as G-34 that confronted former military Head of State, late General Sani Abacha, asking him to perish the idea of succeeding himself.

G-34 with other groups became the Peoples Democratic Party [PDP] with Ekwueme as the founding chairman. Dr Ekwueme failed in his bid to become the Presidential candidate of the party in the 1999 Presidential election. He had delivered his local government, Orumba North, his state Anambra, and his zone, South East, as demanded by the party as a pre-condition for qualification to contest the Presidential primaries. Something went wrong but that is not the subject of this write up.

Dr Alex Ifeanyichukwu Ekwueme notified the Igbo Nation of his Presidential aspirations and asked them to follow him to the PDP. A significant number of Igbo political heavyweights, Dim Chukwuemeka Odumegwu Ojukwu, Chief Emmanuel Iwuanyanwu, Chief Arthur Nzeribe to mention but a few, refused and joined the APP as it then was. But Ndigbo had decided to follow Ekwueme to the PDP.

The PDP swept the South East from local government elections to the gubernatorial elections. I stand on very firm grounds when I say, that almost all elected officials from the South East who were elected in 1999, on the ticket of the PDP, owe their political ascendancy to Ekwueme’s effort in rallying the Igbos behind his presidential aspiration. Did we keep faith? Again, that is not the focus of this discourse. Elili malu ngwugwu, mana ngwugwu ma onye kelie!

Dr Ekwueme did not become President of Nigeria and today, may not even be a powerful figure in the party he founded [PDP] but the ideas he put forth will serve this Country well and his place in history is firmly assured.

Hon Chudi Offodile is a lawyer and former member, House of Representatives

Turkey and the insatiable hunger for war, By Garba Shehu