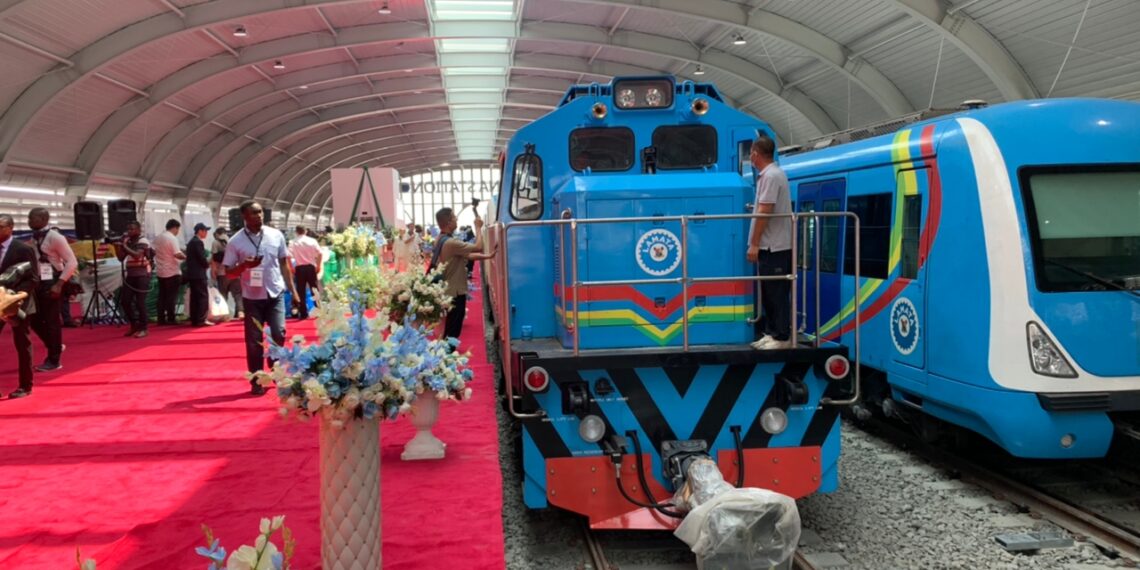 Governor Sanwo-Olu commended President Buhari for the “tremendous support” received by the state since 2015 and the successful delivery of the project.

Lagos State governor Babajide Sanwo-Olu has opened up on some setback encountered by his government before the newly commissioned Lagos Blue Rail Project came into fruition.

He spoke on Tuesday during the formal opening of the first phase of the elevated train network that stretches from Marina to Mile 2.

The project was inaugurated by the president, Muhammadu Buhari, in the Marina area of the state.

“Over the years, the journey has been eventful, many challenges have been surmounted, including lack of support from the previous government, especially the PDP government when they were in power,” Mr Sanwo-Olu said.

“It is not a secret that the only ambition of that party was to capture Lagos, not to support progress and development.

“They made this clear in very many ways, including the unconstitutional withholding of critical funds.”

The Peoples Democratic Party ran the federal government from 1999 until 2015 President, Goodluck Jonathan, lost his reelection bid to Mr Buhari of the All Progressives Congress (APC).

Mr Sanwo-Olu added that the Buhari administration offered “tremendous support” unlike the previous administration that did not give “necessary support.”

He also said that the train would take “just less than 15 minutes” from Marina to Mile 2, for a journey that usually takes an hour or more, “thereby reducing travel time, improve the quality of life of Lagosians, and making the state one of the most resilient mega-cities not only in Africa but it will compete with other mega cities in the world.”

Mr Sanwo-Olu also paid tribute to a former governor of the state, Bola Tinubu, who is also the APC presidential candidate.

The governor described Mr Tinubu as the “architect of modern Lagos” for “developing a comprehensive Road Map for the future of Lagos State; one that laid out very clearly the pathway to a modern, prosperous, and globally competitive megacity.”

The Blue Line is expected to be 27 kilometres long, connecting Okokomaiko to Marina.

Mr Buhari, who was on a two-day visit to Lagos, commissioned the rice mill and Lekki Deep Sea Port on Monday.

Once it becomes operational, riders will be able to use the cowry card to access the train.

At the event, the governor signed an MoU to kickstart the second phase of the Blue Rail project, which will cover the 14-kilometre stretch from Mile 2 to Okokomaiko.

President Buhari alongside other dignitaries,including journalists, took a tour on the train, moving from the Marina station to the National Theatre and back.

Mr Sanwo-Olu also said that by May, the Red Rail line, which stretches from Oyingbo to Agbado area of the state, will be completed.

“It is also on track that you will be commissioning the Red line before the end of your administration,” he said to the president who will leave office on 28 May.

Earlier, the president commissioned the John Randle Centre for Yoruba Culture and History.

“With a 1,000sqm exhibition gallery and so much more, it will stand out as the first cultural centre of its kind in Lagos,” Mr Sanwo-Olu wrote in his Twitter handle.

“We all grew up with stories of the sanctity, elegance and magnificence of Yoruba history.

“The John Randle Centre will provide a flexible, space for learning programmes, art installations and live music events telling stories of the past and creating present day memories