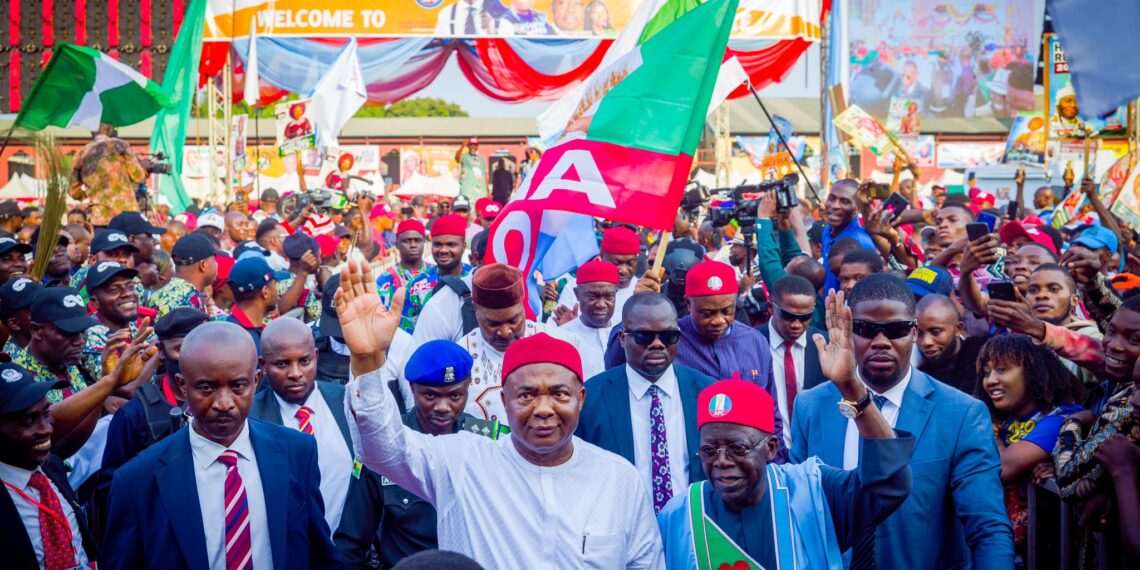 The presidential candidate of the All Progressives Congress (APC) Bola Tinubu during a rally in South-east Nigeria.

2023: ‘You must elect me as president to share in Nigeria’s greatness,’ Tinubu tells Igbos

Mr Tinubu made a similar promise to Igbos during a rally in Enugu State earlier this month when he said electing him as president is the South-east’s only route to the “national cake”.

The presidential candidate of the All Progressives Congress (APC) Bola Tinubu, has told Igbos that they must vote for him alongside other candidates of the APC in the forthcoming general elections to share in Nigeria’s “greatness and joy”.

“You owe me and Nigeria three fingerprints. (There are) three people you must elect to partake in the joy, happiness and sharing in the greatness in Nigeria.

“One, president. Vote for me. Second, House of Representatives (candidates) and third, senatorial (candidates) under the symbol of the broom,” he said.

Mr Tinubu made a similar promise to Igbos during a rally in Enugu State earlier this month when he said electing him as president is the South-east’s only route to “national cake”.

The APC, during the rally in Abia State, promised to industrialise the state to make it one of the major exporters of manufactured goods in the country.

“Your state is a centre of production and industry. Today, my hope is renewed that together, we can achieve industrial activity unprecedented in our history.

“Aba market is one of the largest in West Africa. I see it becoming a major exporter of all types of manufactured goods to Asia, to North and South America and Europe,” Mr Tinubu stated.

“I see this state humming with industrial activity such that it will become a world famous centre of activity from the manufacture of clothing to that of cars, appliances and computers and their components,” he added.

Mr Tinubu also promised to provide jobs for the teeming unemployed youths in the South-east and the entire country by strengthening the digital economy and improving the country’s power generation and distribution.

“We will provide better infrastructure to open the region and the entire country to the trade, export, travel and tourism in which you will excel. These include roads, waterways, ports, rail and the provision of steady and reliable power,” he said.

He reiterated his earlier promise to end recurring industrial action by the Academic Staff Union of Universities if elected Nigeria’s president, assuring that he would give priority attention to education and restore confidence in the country’s education system.

“I promise you today, your frustrations will be over. None of you will spend eight years for a four-year course,” he said.

The APC candidate also promised to address rising insecurity in the country.

“Insecurity will be tackled using advanced technological platforms for surveillance and tracking kidnappers and violent criminals,” he said.

“Security forces will be better trained and better compensated. They will exercise restraint when needed, but will also show strength whenever put to the test. This nation will be a safe and prosperous place to live.”

Court strikes out Saraki’s suits against EFCC, ICPC, others