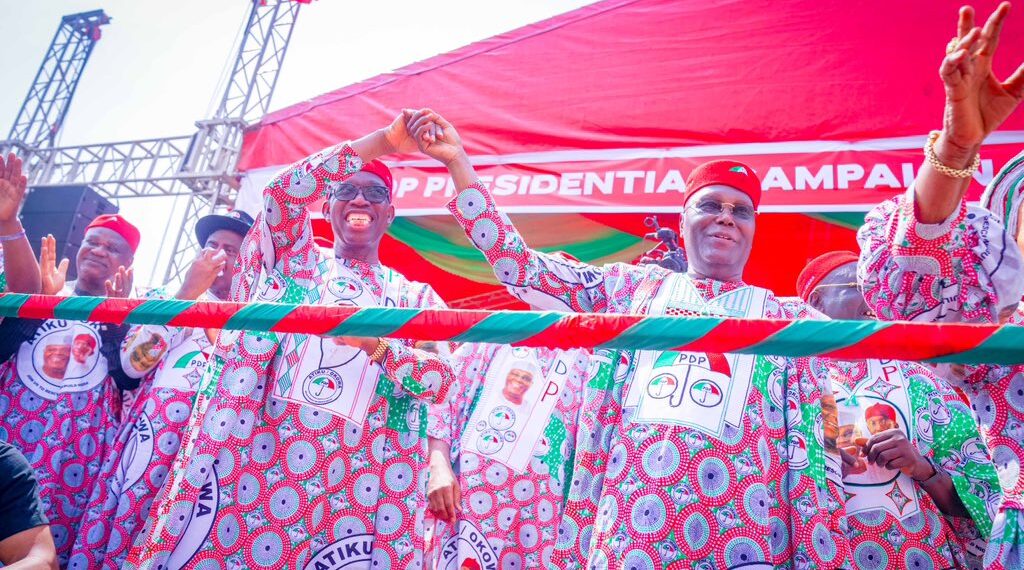 Convert your support for me to votes, Atiku tells supporters in Delta

Atiku said he chose Governor Ifeanyi Okowa as his running mate because of the massive support for him in Delta and the entire Niger Delta region.

Asaba, the Delta State capital, stood still on Tuesday as supporters of the Peoples Democratic Party (PDP) turned out en-masse to grace the party’s presidential campaign in the town.

The News Agency of Nigeria (NAN) reports that the over 25,000- capacity Stephen Keshi Stadium, the venue of the rally, overflowed with party supporters while those outside the stadium outnumbered those within.

Addressing the rally, the PDP presidential candidate, Atiku Abubakar, lauded the large turnout and urged those in attendance to convert their support to vote for the party massively.

He thanked the people of Delta for their resolute commitment to the PDP since 1999 and urged them to continue to support the party.

He assured that the support which informed his decision to choose Delta State governor, Ifeanyi Okowa, as his running mate was part of his commitment to reward the state and Niger Delta in general.

He said his administration would devolve power to states to enable them to control their resources, stressing that the sacrifices of Delta and the Niger Delta would be rewarded.

Atiku said he was not in Delta to campaign but to show gratitude to the people for supporting the party since 1999 till date.

“Delta and indeed all Niger Delta have never failed me; you have supported me all through and I shall not betray that trust.

“It is because of the support that I chose one of your own in the person of Governor Okowa as my running mate,’’ he said.

He called on the people to support the party and vote en-masse for PDP to ensure the realisation of the party’s agenda.

Atiku pledged to end strikes in tertiary institutions to ensure a credible and functional education system in the country.

He also pledged to grow the economy through massive industrialisation; ensure the security of life and properties and resource control.

“With me as president, I want to assure you that there will be no more strikes by ASUU.

“Also, we shall devolve power to the states; there will be resource control and you as the Niger Delta shall benefit from that policy.

“Security is paramount; it is our responsibility and commitment to secure this country to enable businesses to thrive.

“Since 1999, Delta has remained a PDP state and it has continued to enjoy the dividends of good governance.

“You must believe in PDP to deepen development and grow our economy to become the largest economy on the continent,’’ Atiku said.

On his part, Mr Okowa charged PDP supporters to convert the large turnout to votes by collecting their Permanent Voter Cards (PVCs) by voting for all PDP candidates.

He said the large turnout by youth and others was impressive and since Delta is the choice for vice president, the people should appreciate Atiku with a large number of votes.

“We have been looking for a president with capacity, knowledge and experience; Atiku fits in and he is the man to reset the county’s economy,’’ Mr Okowa said.

In his remarks, the Chairman of the Presidential Campaign Council, Governor Udom Emmanuel of Akwa Ibom State, charged the people to affirm their support by voting for PDP.

According to Mr Emmanuel, the rally was to celebrate victory as Delta and the Niger Delta will poll more than five million votes for the PDP.

“I am certain that with Atiku and Okowa as president and vice-president, respectively, international oil companies that left Warri and other parts of the Niger Delta region will return.

Mr Obaseki pledged the resolve of Edo people to poll 1.5 million votes for the Atiku-Okowa ticket.

Mr Tambuwal said PDP leaders are managers of human, institutions and resources and that a vote for Atiku-Okowa would be rewarding.

The party’s National Chairman, Iyorchia Ayu, who later received some defectors from the All Progressive Congress (APC), All Progressives Grand Alliance (APGA), and Labour Party (LP), noted that Delta remained a one-party state.

“We are sure that you will all come out en-masse to vote PDP all through in February and Mach elections.

In their separate remarks, the party’s governorship candidate in Delta, Sheriff Oborevwori; former Governor Emmanuel Uduaghan and the Minority Leader, House of Representatives, Ndudi Elumelu, thanked Atiku for the choice of Mr Okowa as running mate.

They pledged the state’s resolve to deliver massive votes for the party during the elections.

The News Agency of Nigeria (NAN) reports that the rally provided opportunities for food and drinks vendors, POS agents and others to make brisk businesses.