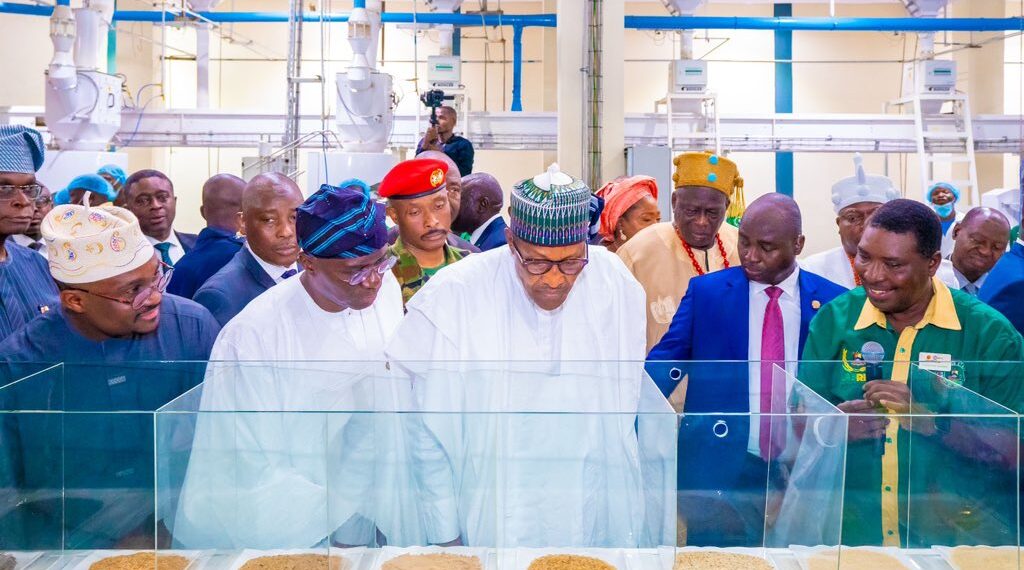 The Lagos Rice Mill, Imota is a two x 16 metric tonnes per-hour mill standing on an area of 8.5 hectares of land.

President Muhammadu Buhari on Monday inaugurated a 32-metric tonnes per hour Lagos Rice Mill in Imota, Ikorodu, a suburb of Lagos, saying the mill will support the rice revolution in Nigeria.

The News Agency of Nigeria (NAN) reports that the Lagos Rice Mill, Imota is a two x 16 metric tonnes per-hour mill standing on an area of 8.5 hectares of land.

The project has an annual paddy requirement of over 240,000 metric tonnes to produce 2.5 million 5OKg bags of rice per annum.

Other dignitaries who accompanied the president include the Commissioner for Agriculture, Abisola Olusanya, the Special Adviser to the governor on Rice Initiative, Rotimi Fashola; NiDCOM boss, Abike Dabiri-Erewa and traditional rulers Jimi Benson and Oba Gbolahan Lawal.

The president unveiled the rice project and observed a brief display of how it is being produced and packaged.

According to him, the Lagos Imota Rice Mill is part of President Muhammadu Buhari’s agricultural revolution.

“When he started his government, he said Nigeria must grow what they eat and they should eat what they grow.

“We are happy that Lagos is the testament for that. With 2.5 million bags of 50kg rice per annum, Lagos is ready to support the rice and food revolution in Nigeria.

“The two units rice mill will create close to 250,000 direct and indirect jobs. We want to thank the local communities of Imota in Ikorodu. We thank you all for waiting patiently.

“Mr president is indeed excited that we have stated another first in Nigeria and in sub-Saharan Africa,” he said.

In his contribution, the Chairman, All Farmers Association of Nigeria (AFAN), Lagos State and South-West Zone, Femi Oke, commended the state government for the initiative.

Mr Oke said that farmers would continue to support the mill by providing more paddies.

Mr Hunsa urged the state government to continue to empower farmers with implements in order to increase paddy production to feed the mill.

“This project is very wonderful, it is a thing of joy to us as rice farmers in Lagos. I am happy that such a thing is happening in Lagos,” he said.

Meanwhile, traditional rulers in the state applauded the state government for the completion and inauguration of the mill in Imota community, Ikorodu.

Speaking at the event, the traditional rulers described the project as a landmark achievement.

Mr Shotobi, commended both the federal and state governments for siting the rice mill in Imota and promised that the project would be maintained by the community.

He said the rice mill would bring enormous economic opportunities to the community and jobs for the teeming youths in the area.

According to him, the rice mill will bring great opportunities to Imota, especially in employment.

“I urge our youth to stop searching for white collar jobs but focus on agriculture or study agriculture to increase the country’s food chain,” he said.

Also, the host traditional ruler of Imota, Oba Ajibade Agoro, said the project would boost the commercial and economic development of the Imota community.

He commended Governor Sanwo-Olu for initiating and seeing to the completion of the rice mill, saying that the facility would have a multiplier positive effect on the community.

“I am the happiest man on earth today because it was during my reign as the Oba of Imota that this is happening.

“I am 30 years on the throne and I am going to celebrate it with this inauguration because it is a landmark achievement bestowed on the people of Imota during my tenure.

“This plant will bring about those factors of production that will promote commercial and economic development.

“This mill is projected to create up to 250,000 jobs, just imagine the multiplying effect of such a number if added to our community with their dependents,” Agoro said.

Also speaking, Oba Lawal, the Oniru of Iru land, commended the Lagos State Government for being the first state to have a state owned mill and the host community for providing the land.

He noted that the rice project which was first initiated as Eko Rice had contributed immensely to the state’s growth and provided jobs through the rice value chain right from production to milling and transportation.

“I am very happy about this development. I remember 2011 to 2012, when the Eko Rice started, it was 2.5 metric tonnes capacity.

“We are able to create a lot of jobs through the rice value chain.

“Today, we are on eight hectares of land optimally utilised and the number of jobs it will create is awesome, this is the biggest in West Africa,” Oniru said.