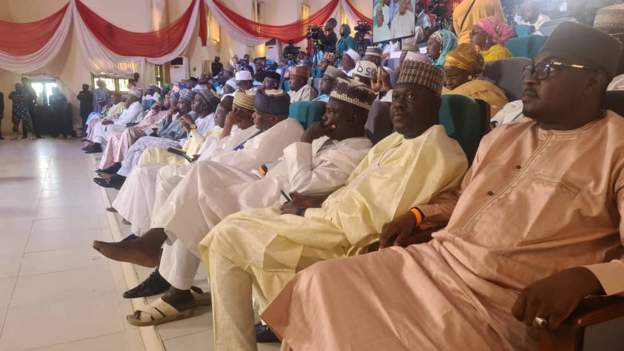 The top four candidates spoke extensively on how to improve healthcare delivery, education and agriculture in the state.

The governorship candidates of the four leading political parties in Katsina on Monday reeled out their plans in a debate organised by the BBC Hausa Service.

The debate, which took place at the Local Government Service Commission in Katsina, was moderated by Umaima Sani – Abdulmuminu of BBC Hausa and lasted for two hours, and 30 minutes.

The candidates who participated in the debate were: Yakubu Lado of the Peoples Democratic Party (PDP), Dikko Radda of the All Progressives Congress (APC), Nura Khlail of the New Nigeria Peoples Party (NNPP) and Jaafar Jino of the Peoples Redemption Party (PRP).

Katsina, like many states in the North Western region, is witnessing a series of terrorist attacks that have led to the death and displacement of millions of residents.

The poverty rate has also been on the increase in the region with the latest Nigeria Bureau of Statistics NBS Multidimensional Poverty Index showing Katsina state has a 74.5 per cent poverty rate, second only to Sokoto.

While Mr Radda of the APC said he would lead the fight against terrorists by going to their camps, Mr Lado of PDP said he would first tackle drug abuse and unemployment among the youth, which he said is the cause of insecurity.

Mr Khalil of NNPP said he would involve traditional rulers in the decision-making process as he believed this would reduce the insecurity in killings in the state. Mr Jino of PRP said he would concentrate on the victims of terrorist activities to stop them from thinking of taking arms to carry out reprisal attacks.

“Before I released my campaign documents, I sat with medical doctors and healthcare workers and we discussed the salary issue. When you look at it, Katsina State is in a serious situation because of the lack of these workers. They’re leaving because there is no good salary,” he said.

Mr Khalil said he would expand the health insurance scheme to ensure every household is captured. He also promised to engage in the massive provision of drugs to hospitals and health centres.

Mr Radda said he would ensure the provision of potable water and fight against malaria to reduce the high rate of infectious diseases. He said with a clean environment, there would be minimum health issues in hospitals.

Mr Lado said he would increase the number of health workers and ensure training and retraining. He said he would employ at least four medical doctors in every local government area.

“I’ll employ more teachers and ensure they’re well trained. I’ll also ensure that classrooms are not congested to ensure pupil and teacher interaction. If elected, basic education will be given the topmost priority because that’s the beginning and we need to make it better,” he said.

Mr Jino on his part vowed to not only recruit more teachers but ensure their welfare. He promised to tackle the issue of out-of-school children by declaring free and compulsory education.

On his part, Mr Khalil said he would seek more revenue and most of the funds got would be channelled to the education sector.

Mr Radda said he would ensure that the politicisation of teacher recruitment is stopped.

Speaking on agriculture, Mr Lado vowed to retrieve all farmlands sold to individuals by the state government.

“Retrieving and giving back the farmlands to their rightful owners would help us in reviving the relationship between herders and farmers. I would also provide fertilizer at an affordable price to the public,” he said.

Mr Radda said if elected, his administration would revive agricultural institutes in the state to equip farmers with the knowledge of farming.

Mr Jino said he would ensure that fertilisers are sold at N1,700 per bag to make it affordable. He also promised that his government would establish an agriculture loan bank.

Mr Khalil said his administration would invite investors to invest in the agriculture sector and provide an enabling environment for farmers to sell their produce.