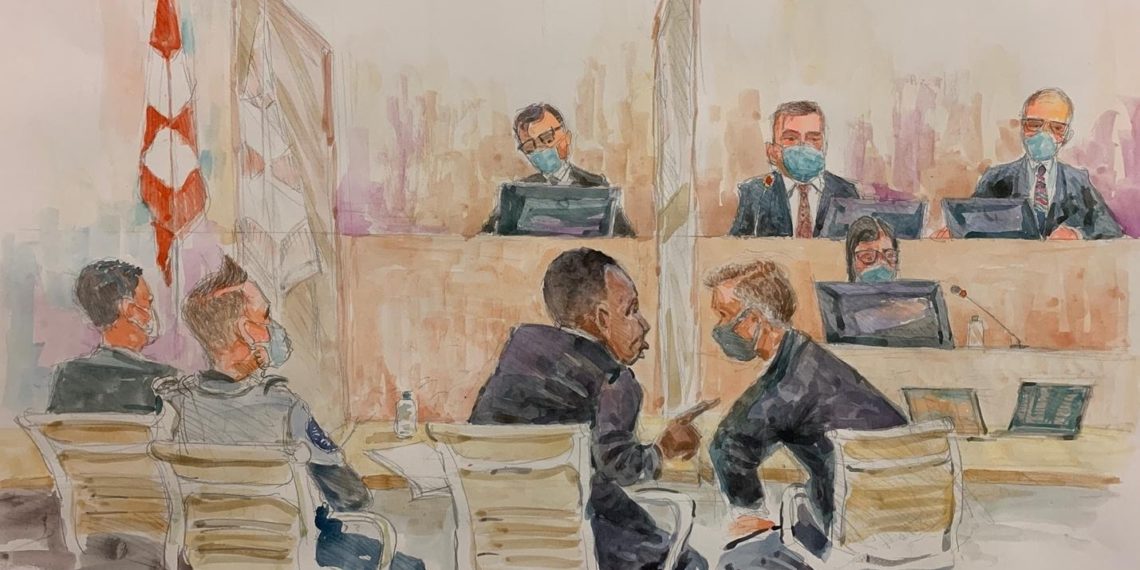 The Swiss Federal Court in Bellinzona, Switzerland where Alieu Kosiah, center, is being prosecuted for war crimes and crimes against humanity. New Narratives/Leslie Lumeh

Kosiah denies allegations of the forced labour convoy and claimed that he would have never sent civilians near the frontline.

BELLINZONA, Switzerland – The second last day of witness testimony in the appeal hearing of Alieu Kosiah, the Liberian former rebel commander who was convicted of war crimes in Switzerland’s first war crimes trial in 2021, saw prosecutors concede it was likely Kunti Kamara, Kosiah’s former ally convicted in his own war crimes trial in Paris in November, who stabbed a victim to death. The murder was one of many crimes for which Kosiah was convicted.

However, both sides agreed that even if Kamara committed the crime, Kosiah could be found guilty as a co-conspirator. The defence, which has argued that Kosiah was not present at the place where the crimes were committed, didn’t argue against this requalification.

A plaintiff from the previous day’s hearing continued his testimony today describing the forced march that many men in the Foya area of Lofa County have said they were compelled to undertake to convey goods to the Guinea border for sale on behalf of Ulimo, the rebel group in which Kamara and Kosiah have admitted to being commanders.

As he has often during these trials, Dimitri Gianoli, Kosiah’s lawyer, asked the plaintiff very precise questions to prove that his memories were not reliable. Most of them were specific questions about the itinerary of those forced labour convoys. Upon questions from the judge, the plaintiff admitted that as he couldn’t read, and like most of his compatriots who had a limited education, he wasn’t able to read a map. This underscored a consistent complaint by Kosiah in this trial, that plaintiffs and Kosiah himself have struggled to explain themselves in this foreign court setting.

The plaintiff said that he saw the uncle of a friend of his, (the friend is also a witness in the proceedings), being killed during a march. “We were carrying ammunition and there were gunshots while we were crossing a bridge,” he answered to Gianoli’s query whether he was certain the man was dead. “I was too preoccupied with my own survival but when you see someone dead in front of you, you don’t forget.”

When Kosiah was given the opportunity to reply, he was back on the offensive. “In life when you make a mistake, you have to live up to it. Don’t double down on it. That’s exactly what the prosecutor is doing,” he said. Kosiah repeated his earlier accusations that witnesses had been paid.

At least one of the witnesses the defence brought from Liberia to testify on Kosiah’s behalf in 2021 had asked for $US10,000 dollars to cover his expenses in an email seen by the court. But Kosiah’s team has presented no evidence that prosecution witnesses and plaintiffs have been paid.

Kosiah denied allegations of the forced labour convoy and claimed that he would have never sent civilians near the frontline. Alain Werner, Director of Civitas Maxima and one of the lawyers for the plaintiffs, disputed this allegation. Werner has become a chief nemesis for Kosiah since the former rebel commander was arrested by Swiss authorities in 2014.

“In his deposition, the child soldier who testified at your request stated that, ‘Somebody had to carry the ammunitions as we were carrying the weapons’. He also stated you were present,” said Werner.

Alieu Kosiah denied it. “I’m not saying that some commanders weren’t doing forced labor convoys, but I never did it myself,” he claimed. Werner pushed to expose inconsistencies in Kosiah’s statements.

“The witnesses that you brought said that there was a forced transport in Kolahun,” said Werner. “I’m not denying the transport, but I wasn’t there,” replied Kosiah.

The second-to-last plaintiff started by thanking the Swiss court for the opportunity describing it as, “the most important day of my life” and saying he was longing for justice. “A lot of us are hoping for a Liberia court to judge war criminals, sadly it still hasn’t happened.” The plaintiff said his desire for justice was “not only on Alieu Kosiah. If anyone had committed a crime that I witnessed, I would also come to testify.”

He repeated what the last plaintiff, his former classmate, had said about three villagers who came to Switzerland to testify in support of Alieu Kosiah.

“They told everyone in the village that we were taking part in a trial in Switzerland. One of them even called me to ask me questions.” The plaintiff claimed the three were close Ulimo. One would bring them marijuana and was in turn never forced to participate in the convoys, according to the plaintiff. The court has ordered plaintiff and witness identities to be suppressed to protect their identities.

The judge asked the plaintiff to quantify the number of forced labour convoys he took part in. “It’s uncountable, we were like their slaves,” he said. The judged went on: “Ok, but five, ten or twenty?”

“I wouldn’t be able to give an estimate during the ‘93-‘95 period as it was too frequent. Almost on a daily basis. Every day in the morning, they would gather the young saying that 5-6 people would need to stay in the village, as they might need to carry stuff. It was our daily routine,” he said.

The judge then asked him why he remembered two of the rebels – Kamara and Kosiah – among others. “I wanted to focus on the major ones because I will never forget them,” the plaintiff replied, rocking back and forth on his chair.

On request, he recalled a day when he left the village of Kolahun to go to Foya. “I was afraid of having to do more forced labor. I went to Foya upon order from “Mami Wata” (a Ulimo fighter), but as soon as I arrived I ran away as I saw wheelbarrows full of human remains.”

Asked how he recognized Alieu Kosiah in Foya that day, the plaintiff said: “Everybody was saying his name all the time. He was sitting, and I saw him from a distance.”

“Soldiers would get in between civilians to prevent us from fleeing while we were walking,” he said, describing the forced convoys. “But as soon as we arrived, you would not come close to them or you would die.” He recalled how his uncle was killed – though he didn’t see it with his eyes. “He was behind us. Too tired to walk. Alieu Kosiah came and threatened him. I heard him going to look for a gun and then a gunshot. That’s why I say that he killed him.”

Aiming to diminish the witness’s credibility, Kosiah’s lawyer asked him about a song that many witnesses have claimed Ulimo rebels sang during forced marches. The plaintiff started singing. “In ‘90 when the NPFL the Ulimo fled. Then they came back. So they sing: When we came back to Liberia, we became lions.”

Asked by the judge whether he recognised the song Kosiah conceded he had heard it. “I’m not a singer, but it is true that some soldiers were singing it.” He then started laughing cynically. “For the rest, everything is false.”

Kosiah also questioned the credibility of the witness. He claimed the witness’s uncle was never killed and was still alive. He was one of the witnesses that the defence had brought to the court last year. “Who would not recognize his uncle?” said the former commander repeatedly until the judge intervened.

“Mr Kosiah, an argument doesn’t get better by repeating it.”

The appeal continues next week.

This story was a collaboration with New Narratives as part of its West Africa Justice Reporting Project.

Meet the cast of ‘The Real Housewives of Abuja’