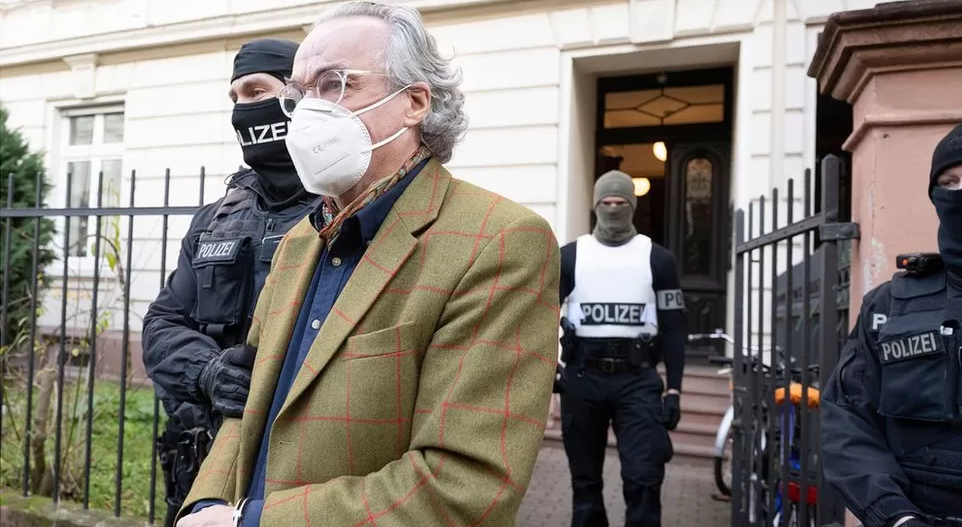 German's federal prosecutor according to news reports said the 25 were supporters of the far-right group Reichsbuerger movement who planned to storm the parliament by force to install as national leader a prince who had sought support from Russia.

German police on Wednesday arrested 25 people across the country over an alleged plot to overthrow the government.

Germany’s federal prosecutor, according to news reports, said the 25 were supporters of the far-right group, Reichsbuerger movement, who planned to storm the parliament by force to install as national leader a prince who had sought support from Russia.

Russia, however, has denied involvement in the plot.

“There can be no question of any Russian interference,” he said.

Al Jazeera reports that about 3,000 officers conducted the raids at 130 sites across 11 German federal states against adherents of the so-called Reich Citizens movement.

About 22 of the arrested individuals were German citizens and were detained on suspicion of “membership in a terrorist organisation” while three others allegedly supported the organisation, including a Russian citizen.

Some of the group members see the post-World War Two government as illegitimate and call for replacing the elected government with their own.

They do not exclude violence against the state as a means of achieving their goal.

The weekly magazine, Der Spiegel, reported that one of the raided locations included the barracks of Germany’s special forces unit KSK in the southwestern town of Calw.

In the past, the KSK has been investigated over alleged far-right involvement by some of its soldiers. But federal prosecutors declined to confirm or deny that the barracks was searched.

Other suspects were arrested in the states of Baden-Wuerttemberg, Bavaria, Berlin, Hesse, Lower Saxony, Saxony, and Thuringia, as well as in neighbouring Austria and Italy, according to the prosecutor’s office.

Prosecutors said the suspects had been preparing to carry out their plan since the end of November 2021 as they were aware that it could only be achieved with force.

The plot envisaged a former member of a German royal family, identified as Heinrich XIII P R under Germany’s privacy law, as leader in a future state while another suspect, Rüdiger v P, was the head of the military arm, the prosecutors’ office said.

They are accused of establishing a “terrorist organisation with the goal of overturning the existing state order in Germany and replace it with their own form of state, which was already in the course of being founded.”

The prosecutor’s office said Heinrich, who uses the title prince and comes from the royal House of Reuss, which had ruled over parts of eastern Germany, had reached out to representatives of Russia, whom the group saw as its central contact for establishing its new order.

It said there was no evidence the representatives had reacted positively to the request.

The German government will respond with the full force of the law, Interior Minister Nancy Faeser said.

“The investigations provide a glimpse into the abyss of a terrorist threat from the Reichsbuerger milieu,” Al Jazeera quoted Ms Faeser as saying in a statement, adding that the constitutional state knew how to defend itself against “the enemies of democracy.”

The House of Reuss had previously distanced itself from Heinrich, calling him a confused man who pursued conspiracy theories, according to local media. Neither the House of Reuss nor Prince Reuss’ Office responded to requests for comment.

Germany’s monarchy was abolished a century ago. When the Weimar Constitution entered into force on August 14, 1919, the legal privileges and titles of German nobility were abolished. Officially, there are no princes and princesses in Germany.

There has been a worrying rise in far-right ideology in Germany during the last few years.

In May, the Federal Ministry of the Interior reported that 327 employees of Germany’s federal and state security authorities had been found to have links to hardline right-wing ideology over a three-year period.