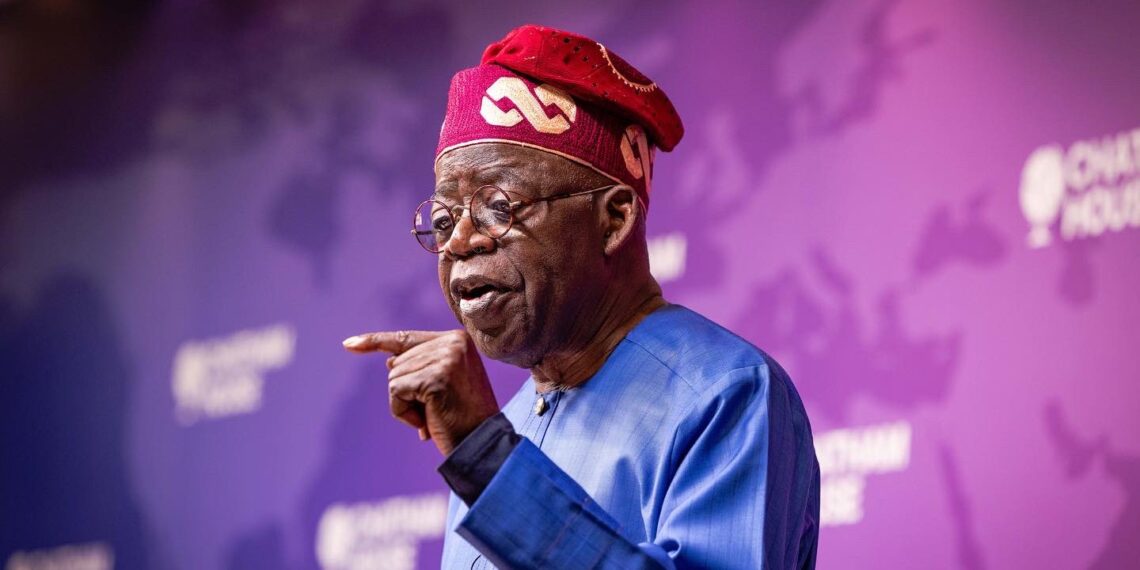 Bola Tinubu speaking at the Chatham house in London

The PDP chieftain said the former Lagos governor's appearance was unimpressive and his handlers are merely window-dressing him.

The Director, Strategic Communications of the National Election Management Committee of the Peoples Democratic Party, Dele Momodu, Tuesday, chided the All Progressives Congress presidential candidate, Bola Tinubu, over what he called his less than impressive engagement with his audience at the Chatham House, United Kingdom, on Monday.

He made his views known in a statement titled, “Weep not for Tinubu but Nigeria.”

Mr Momodu said chieftains of the APC were ‘window-dressing’ Mr Tinubu on a global stage.

He said opposition parties were left unimpressed by Mr Tinubu’s decision to throw some of the questions he was asked to the APC chieftains including the Kaduna State governor, Nasir El-Rufai, and immediate past governor of Ekiti State, Kayode Fayemi.

He said the former Lagos governor’s handlers have caused the nation a huge embarrassment on a global stage.

“Call it what you will, what happened at Chatham House, London, yesterday (Monday), was a complete charade. The Tinubu handlers fumbled and bungled it big time. They showcased him like a packaged invalid. It would have been better to present him as a brilliant politician and administrator, warts and all, who is capable of independent thoughts. No man is perfect. His gaffes would have been more pardonable and acceptable. He was expected to sell his own vision and mission.

“But what we saw yesterday was a theatre of the absurd. It brought back memories of our great former President Umaru Yar’ Adua and how he mysteriously disappeared from the radar and some of his aides governed by proxy. I was one of those who led the ‘Enough is Enough’ protest against the Yar’ Adua cabal in Abuja in 2010. What was unacceptable then is even more unacceptable now with the benefits of hindsight. Our country should be placed above friendship.

He said the appearance was a charade especially when Mr Tinubu’s handlers decided to let others answer his questions for him.

Mr Momodu said the attempt to present Mr Tinubu through others was the work of “…some acolytes who wish to remain eternally relevant in the corridors of power at the expense of the long-suffering nation… All those around Tinubu yesterday (Monday) knew the bitter truth but chose to fool Nigerians.”

The PDP campaign spokesperson recalled that seven years ago, the incumbent president did a good job when he appeared at the same venue to engage with the global audience.

“I was with the President, Major General Muhammadu Buhari (rtd), the day he visited Chatham House seven years ago. He was solid and charismatic. He needed no one to prompt him. He answered questions eloquently and intelligently to the best of his abilities,” he said.