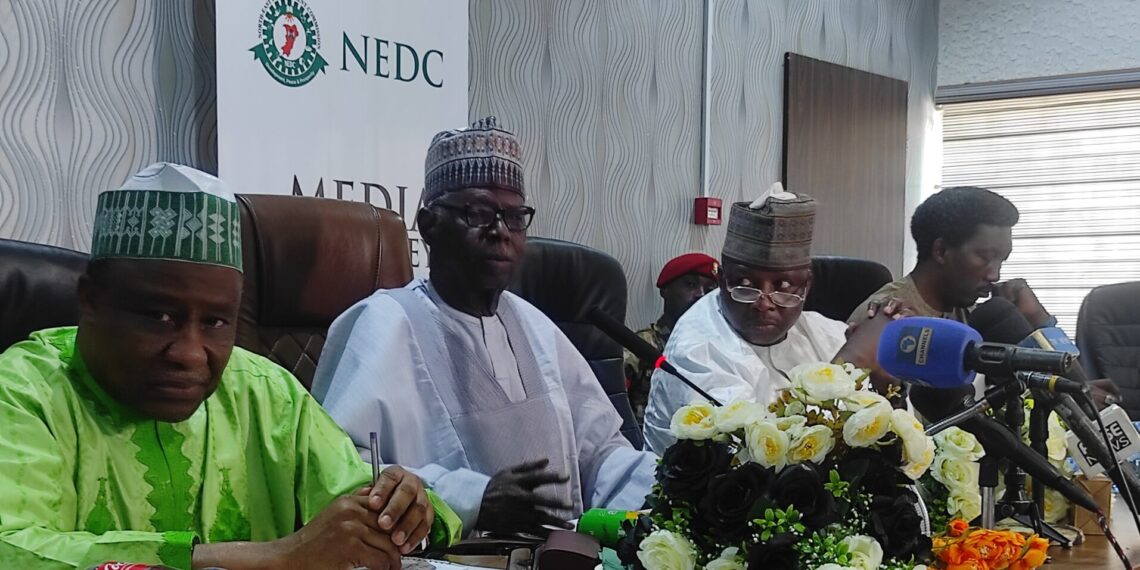 The NEDC is mandated to coordinate the resettlement, rehabilitation, integration and reconstruction of infrastructure for victims.

The Federal Ministry of Humanitarian Affairs, Social Development and Disaster Management has applauded the efforts of the North East Development Commission (NEDC) for undertaking over 500 projects and programmes in one and half years.

Sadiq – Garba Shehu, the representative of the minister, made the commendation during a briefing with senior media executives Monday afternoon in Maiduguri.

North-east, consisting of Borno, Yobe, Adamawa, Bauchi, Gombe and Taraba states, has battled with an Islamist insurgency that has resulted in the death and displacement of millions of people. The region is home to one of the world’s worst humanitarian crises with millions of people displaced as a result of the 13-year-old conflict.

The Commission was inaugurated in 2019 to help in coordinating the resettlement, rehabilitation, integration and reconstruction of infrastructure for victims, among other things.

“At the ministry, we have a monitoring and evaluation department and we follow closely what agencies under the ministry are doing. Looking at what the NEDC we’re looking at 583 intervention projects across the six states of the North East. 583 projects and programmes in a space of about one and a half years, I can tell you the ministry is very proud of what the NEDC has achieved,” Mr Shehu.

He said the ministry and the commission do not discriminate in the siting of the projects as the Minister has commissioned NEDC projects in all six states in the region.

While presenting the commission’s scorecard, the Managing Director of the NEDC, Mohammed Alkali, said the commission has “been implementing noteworthy humanitarian – development – peacebuilding nexus projects as provided in the Buhari Plan of 2016…”

He said the commission would soon release its North East Stabilisation Development Master Plan which will be implemented at the cost of N31.5 trillion.

He said the commission was also into free fistula repairs, psychosocial support services, peace-building initiatives, and free viral Hepatitis vaccination for over 5000 patients.