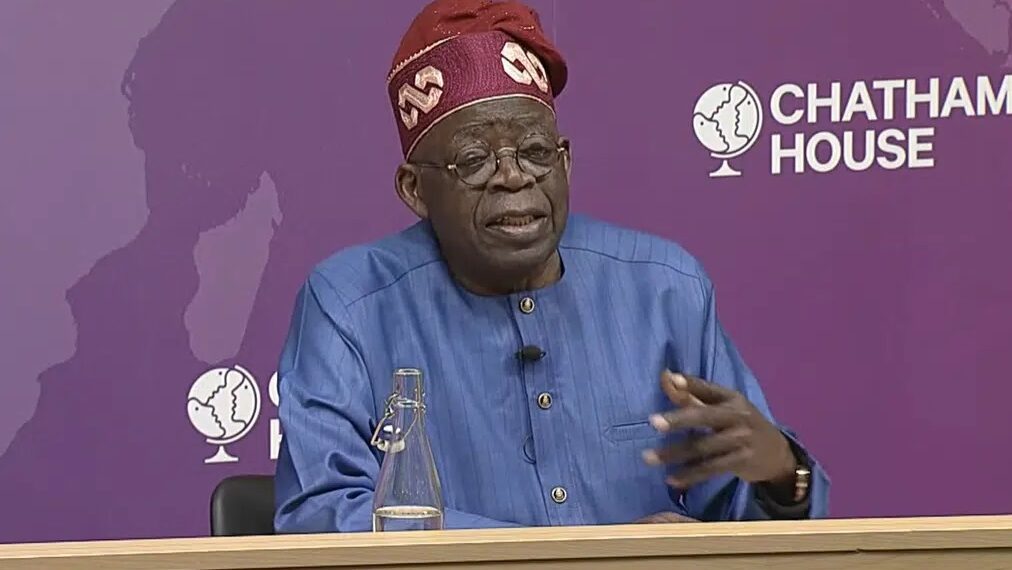 The presidential candidate of the ruling All Progressives Congress (APC), Bola Tinubu, has described the surge in attacks on the facilities of the Independent National Electoral Commission (INEC) as a source of concern ahead of the 2023 general election.

Mr Tinubu stated this in his speech on Monday at the Chatham House in the United Kingdom where he revealed some of his plans for major sectors if elected president.

He spoke on the topic, “Nigeria’s 2023 Elections: Security and Economic Development and its Foreign Policy Imperatives.”

Mr Tinubu said ballot security and election violence are major areas of concern for the country ahead of the polls holding in February and March.

There has been an increase in attacks on INEC’s facilities, particularly in the South-east, South-south and South-west regions in the recent past.

The attack on the commission’s office last Sunday in Oru West Local Government Area in Imo State made it the seventh within the last four months.

Altogether, no fewer than 50 such attacks have taken place in 21 states in the past few years thereby raising fears about holding the elections.

I stand firmly against attacks and violence — Tinubu

Mr Tinubu said the attacks on INEC facilities and violence are the two biggest threats to the 2023 general elections and that he was against the development.

“Ballot security and election violence are areas where there are causes for concern. There is an emerging trend of attacks against the personnel and infrastructure of the electoral commission in some parts of the country. At the same time, political conversation on social media has become more laced with violent rhetoric and threat of violence and retaliation against those opposing, perceived as opposing partition.

“I stand firmly against all forms of electoral violence and intimidation. Having spent most of my career in political opposition, I have long fought against electoral malpractice and attempted to extinguish the legitimacy of the choice of voters. I will continue to do so, I promise,” he said.

He also appealed to his fellow contestants to commit to a peaceful election by allowing voters to determine the path of the country.

“I hereby urge all fellow contestants to do the same. Let the sovereign will of the people decide the path of our nation. And let this election be determined by voters, making their choice freely, rather than domineering domination and trouble,” he said.

Mr Tinubu, a former governor of Lagos State, added that despite the concerns, Nigerians are committed to democracy in Nigeria. He said they do so regardless of their political differences.

He added that “The Nigerian elections of 2023 are coming up at a time when the country’s immediate geographical neighbourhood of West Africa and Central Africa is undergoing serious political turmoil that has manifested itself in the incursion of the military to power in a number of countries.”

The APC candidate also promised that, if elected, his administration will be committed to energy sufficiency through the reform of the sector.

“Energy supply is another priority. There is no version of the world where Nigeria’s ambition for self can be achieved without solving the problem of how to provide energy to homes and businesses across the country.

“It is time to recognise that the centralised approach to energy policy infrastructure is not an optimal engagement, and it is unlikely to improve by mere tinkering around the sides. The federal government as regulator and operator and price fixer is a broken model,” he said.

On education, Mr Tinubu said he would provide student loans and reform the Almajiri system in the northern part of the country.

He added that he would recruit and train more teachers as a way of boosting education.

He said: “There will be student loans. We are going to reform the Almajiri system. We will equally build more schools, recruit more teachers and train them.”

The APC candidate stated that he would introduce technology hubs where “youths can even develop technological languages on their own and make a better 21st-century approach to governance in Nigeria.”

When asked to clear the controversy around his formative years, Mr Tinubu, 70, said his birth, academic and professional records are not inconsistent as his critics claim.

“I have a very good exposure in life. My record is consistent in the school, at the university. They (critics) are now convinced that they wasted their money and their time. The record is there, the transcript is there showing March 1952,” he said.

The APC candidate said he was a proper member of the Tinubu family just as he lambasted an unnamed presidential candidate who is allegedly not a Nigerian.”

“I am not claiming another father, I am Tinubu and Tinubu proper. If they want DNA, they could as well request it from us. One of them has even been accused of not being a Nigerian citizen. I didn’t touch that area.

“Equally, it remains the same, Deloitte, Chicago State University where I graduated from has attested to that. Now, I can announce that I have received my original replacement degree certificate from them,” he said.

Speaking on his professional records, Mr Tinubu said, “Deloitte trained me as an accountant. Mobil Oil has attested to my outstanding record. I got to the pinnacle of my career in the private sector. Who among them can brag about that?

The APC candidate was accompanied to the world-leading institute and think-tank by some of his allies, who also answered questions on his behalf.

Mr Tinubu explained that he allowed his allies to answer questions as a demonstration of his “philosophies and doctrines that I believe in. It is teamship, an unbreakable team.”

“Nigerians including supporters were thoroughly embarrassed to watch Asiwaju Tinubu who earlier showboated with a scripted speech went blank on the world stage in a tragic display of emptiness and inability to personally address questions that were put to him on economy, security and other challenges facing our nation.

“Our campaign finds it appalling that a candidate aspiring to be president of a nation as complex as Nigeria exhibited an embarrassing inability to coordinate his own thought process to the extent that he could not personally think through issues and address them but had to direct questions put to him including those on health and policies to others to answer,” a spokesperson of the campaign, Kola Ologbondiyan, said in a statement.

He added that “Asiwaju has confirmed to Nigerians and the world that he has no business contesting the presidential election; that he is grossly incompetent, completely unprepared for leadership and intends to transfer the onerous task of leading our nation to proxies and a cabal that did not seek votes from Nigerians.”