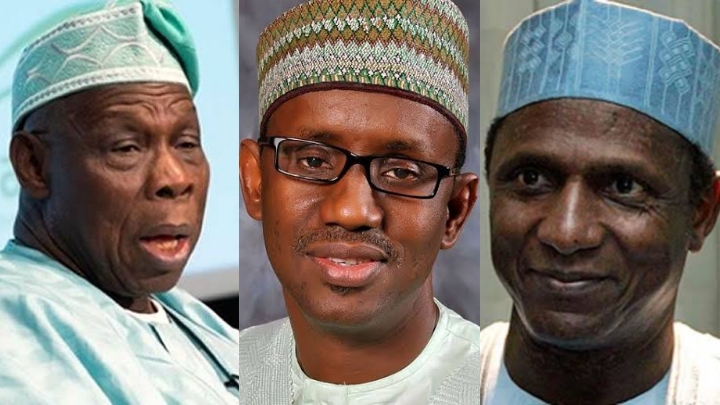 Mr Obasanjo, three days after leaving office as president sent a letter of commendation dated 1 June 2007 to Mr Ribadu praising him for his resilience and doggedness against corruption as EFCC chair.

Before the removal of the pioneer Chairperson of the Economic and Financial Crimes Commission (EFCC) Nuhu Ribadu, in 2007, he got the praises of his former boss who appointed him to office, former President Olusegun Obasanjo.

Three days after leaving office as president on 29 May 2007, Mr Obasanjo sent a letter of commendation dated 1 June 2007 to Mr Ribadu praising him for his resilience and doggedness against corruption as EFCC chair.

Mr Obasanjo described Mr Ribadu as “a good soldier” and his son. He recalled Mr Ribadu’s “uncommon dedication and undisputable loyalty to my administration as President and Commander-in-Chief of the Armed Forces of the Federal Republic of Nigeria”.

The former president’s letter to Mr Ribadu came to light in a new book written by the Editor-In-Chief of PREMIUM TIMES, Musikilu Mojeed.

The new book, titled, ‘The Letterman: Inside the ‘Secret’ Letters of former Nigerian President, Olusegun Obasanjo’, was unveiled publicly in Abuja last Thursday.

Mr Obasanjo’s letter to Mr Ribadu is one of the numerous letters referenced in the book.

The former president commended the former EFCC boss for what he described as his “indomitable spirit and someone who dared to make a difference!”

“I commend Nuhu Ribadu for diligently fighting corruption in Nigeria as head of the Economic and Financial Crimes Commission (EFCC). “I want to say a very big thank you to a good soldier,” the former president wrote about the pioneer EFCC chair.

“Together we have fought an uncommon cause; we traversed the territory that can be described as where angels fear to tread! Walked through the valley of the shadow of death! We dared to make a difference! We stood for something and posterity would remember us for good! For now, it may still be current affairs.”

Mr Ribadu served as the pioneer head of the EFCC, Nigeria’s flagship anti-corruption agency, from 2003 to 2007. During his leadership as the anti-corruption Czar, the EFCC played a critical role in the fight against fraud and corruption and recorded a high number of high-profile convictions.

While Mr Obasanjo enjoined the former EFCC chief to gather more courage in his efforts to withstand “the wiles of the evil ones,” he also called on the latter to Brace up for new challenges.

According to the letter, the former president also expressed confidence in Mr Ribadu’s ability to work well with his successor, the late former President Umaru Yar’Adua.

Additionally, Mr Obasanjo said he was confident Mr Ribadu would have the backing and support of “Mr President (Mr Yar’Adua),” referring to the latter as a “dogged fighter.”

But shortly after Mr Obasanjo left office, Mr Ribadu later fell out of favour under the administration of the late Mr Yar’Adua, which led to his removal from office and demotion in the Police Force. He was also replaced by Farida Waziri who took over office as the first female EFCC chairperson in May 2008.

“The battle is not yet over. We owe it a duty to rescue our people from the malaise of corruption. You would require more courage and exceptional resolve to withstand the wiles of the evil ones. l am sure you will not lack the backing and support of Mr President.” Mr Obasanjo in his letter to Mr Ribadu.

“He is also a dogged fighter. Brace up for new challenges. Be of good courage! God will remain on the side of the righteous. Thank you for doing so well my son.

Mr Ribadu, as the pioneer chair of EFCC, took on some seemingly untouchable politically-exposed personalities including a sitting Inspector-General of Police, Tafa Balogun (now deceased).

Although Mr Obasanjo assured Mr Ribadu that he would similarly enjoy the backing of his successor, then President Umar Yar’Adua, in his letter to the former EFCC chair in June 2007, the reverse was the case.

Mr Obasanjo had described the late President Yar’dua who he helped to succeed him, as “also a dogged fighter”, the relationship between Mr Ribadu with the Yar’Adua administration soon turned sour.

Mr Ribadu was prematurely removed from office and, at some point, had to go into exile.