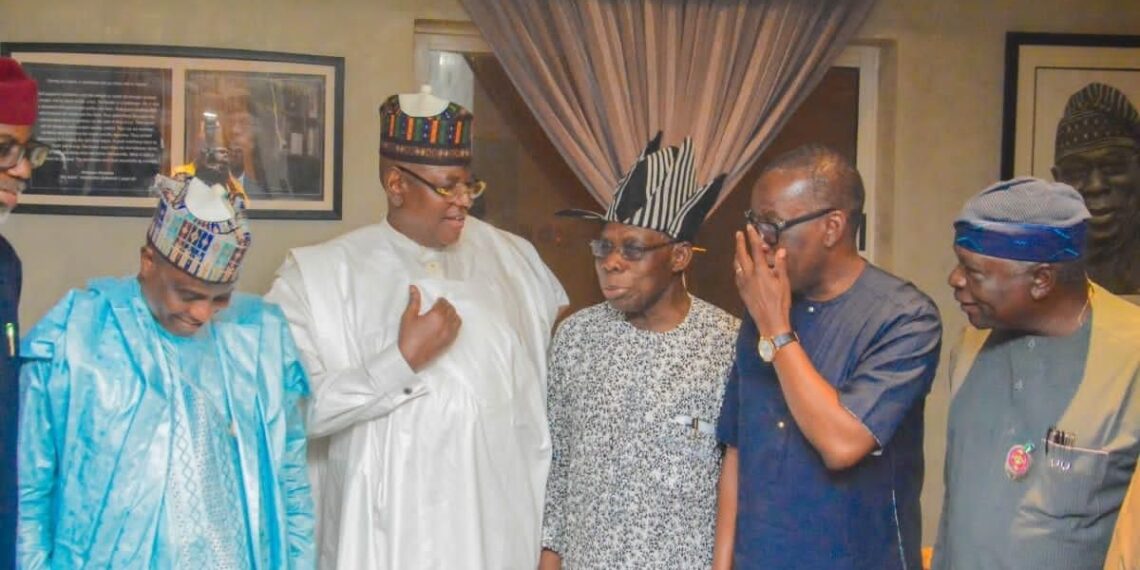 The PDP leaders visited Mr Obasanjo in Abeokuta on Saturday but did not invite journalists to cover the event.

The Vice Presidential candidate of the Peoples Democratic Party (PDP), Governor Ifeanyi Okowa of Delta State, led a delegation of the party to a closed door meeting with former President Olusegun Obasanjo in Abeokuta on Saturday.

Other members of the delegation include the Director-General of the PDP Presidential Council, Governor Aminu Tambuwal of Sokoto State, and a former Jigawa State governor, Sule Lamido.

The media aide to the former president made this known through a statement Saturday night as journalists were not informed about the meeting beforehand.

According to the statement, also at the meeting were a former Governor of Osun State, Olagunsoye Oyinlola, a former Cross River State governor, Liyel Imoke, and a businessman, Oyewole Fasawe.

The statement quoted Mr Tambuwal as saying the team was in Abeokuta to pay respect to the former president, adding that they had “a very fruitful conversation with him.”

Mr Tambuwal added, “My message to Nigerians is that we should come out en masse when it is time in February to vote for a balanced ticket that reflects the characteristics of this country, that will provide leadership that will stabilise this country and revive our economy and foster more of national unity, and that is Atiku Abubakar and Governor Okowa.”

The meeting may not be unconnected to the protracted post-primary crisis in the main opposition party.

A camp led by Rivers State Governor Nyesom Wike is demanding the resignation of the PDP National Chairman, Iyorcha Ayu, and his replacement by a southern member of the party.

The group said such a step is necessary to correct a regional imbalance in the leadership of the party as the two topmost positions in the party are being held by northerners.

But the party and the presidential campaign council rejected the request of the governors, saying leadership changes should wait until after next year’s elections.

Others with Mr Wile in his team are Governors Samuel Ortom of Benue, Ifeanyi Ugwanyi of Enugu), Okezie Ikpeazu of Abia) and Seyi Makinde of Oyo.

Mr Obasanjo served two terms as president under the PDP and left office as the chairman of the party’s board of trustees. But he was quickly removed from the position and in 2014 formally resigned his membership of the party.

However, in 2019, he endorsed the PDP presidential candidate, Atiku Abubakar, who was his vice president, but he has refused to do so for the forthcoming election since Atiku was renominated by the party.

It is not clear whether the delegation was in Abeokuta to seek his intervention in the party’s crisis and if so, the response it got from the former president.