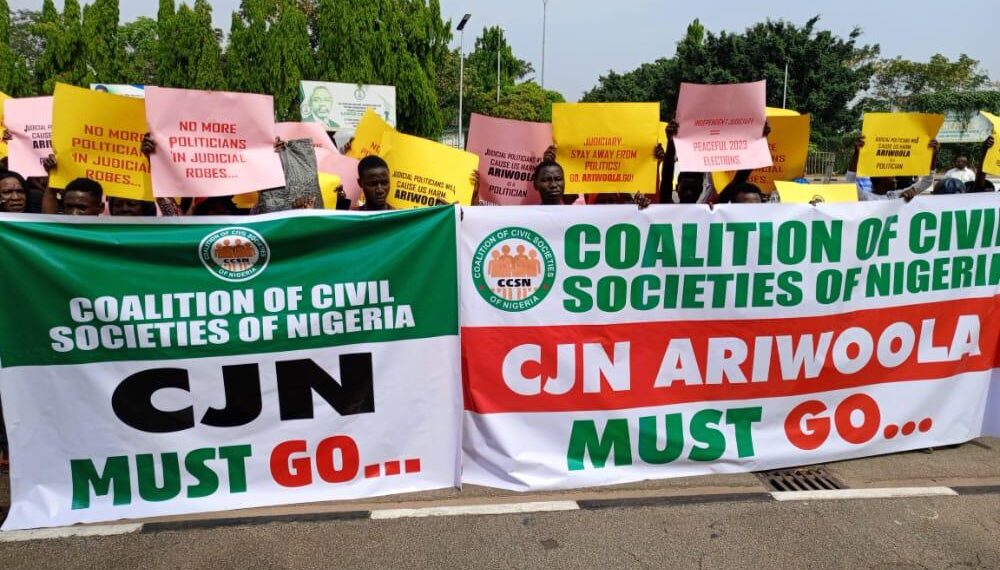 Protesters demanding the removal of the CJN

The group said a recent statement credited to the CJN will endanger the nation’s democracy.

Some civil society organisations (CSOs) under the aegis of the Coalition of Civil Societies of Nigeria (CCSN) on Friday held a protest at the entrance of the National Assembly demanding the removal of the Chief Justice of Nigeria, Olukayode Ariwoola, over a ‘partisan comment’ he made in Rivers State.

The group staged the protest over what they described as the seeming partisanship of the CJN and urged the National Assembly to institute a probe of the circumstances that led to statement credited to him.

Mr Ariwoola was reported to have said he was happy that Governor Seyi Makinde of Oyo State, the state the CJN hails from, was part of the G-5 governors.

Mr Ayu and Atiku both hail from the North.

The Supreme Court has since debunked the report.

The Director of Information and Press of the Supreme Court, Festus Akande, said the CJN only spoke briefly at the banquet organised as part of events lined up for the commissioning of two judiciary projects executed by the Rivers State government, and never made the comment credited to him.

We can no longer trust the court under Ariwoola

Speaking on behalf of the group, Ishaku Balogun, the convener of the group, said Mr Ariwoola’s statement undermines the independence of the judiciary.

He said the CJN has descended into the arena of politics, adding that Nigerians can no longer trust him to be non-partisan.

“The Independence of the judiciary cannot be deemed satisfactory since the CJN has already taken a side in a political dispute within a political party out of the 18 others who are sponsoring candidates in the 2023 elections.

“We demand his immediate sack as Nigerians no longer have confidence in his person as an impartial judge. Chief Justice of Nigeria Tajudeen Olukayode Ariwoola’s affinity in political dispute is a mark of interference capable of truncating the good efforts already put in place by the National Assembly.

“The Coalition of Civil Societies of Nigeria has since analysed his statements at the commissioning and came to the conclusion that democracy is indeed in danger,” he said.

Mr Balogun added that “the CJN should resign, failing which our coalition will press for all legitimate means through citizens revolt for him to vacate the exalted, impartial and independent office of the Chief Justice of Nigeria”.

He also alleged that the group also staged a protest on Tuesday, but they were dispersed by police.

“A few days ago, we came out to save our hard-fought democracy. The men of the Nigeria Police Force unleashed on us state powers, tear-gassing peaceful Nigerians who had assembled to voice their disappointment at the partisanship of the Chief Justice of Nigeria,” he said.

The Coalition is made up of 18 CSOs among which are the Civil Society Forum of Nigeria, Nigeria Youth Development Forum, Democratic Youth Initiative, Forum for Social Justice, Movement for the Development of Democracy and Safeguard Nigeria Movement.