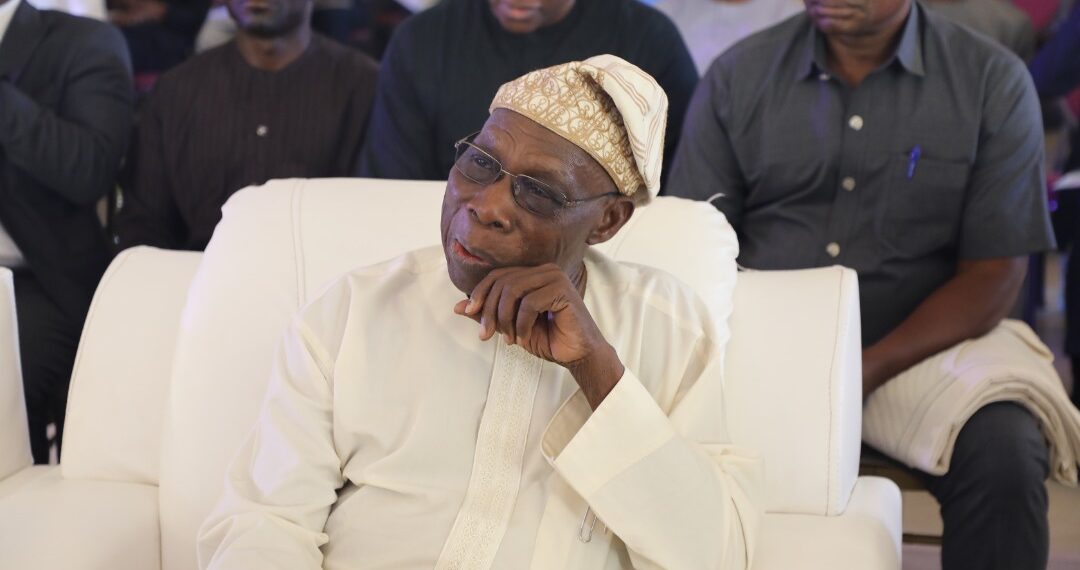 Former president of Nigeria, Olusegun Obasanjo, at the unveiling of the book "The Letterman".

“I did not intend to come. He (Mojeed) did not take my permission. Until last week when he brought me two copies. I did not know that he was writing the book. When I read the book, I was flabbergasted. I was torn between him not telling me and the amount of work he put in.”

Pleasant surprise and excitement hugged the air midway into the unveiling of “The Letterman: Inside the ‘secret’ Letters of former Nigerian President, Olusegun Obasanjo,” Thursday afternoon when the former president unexpectedly stormed the Bolton White Apartments, Abuja venue of the event.

Mr Obasanjo and his entourage arrived at the venue while a former Minister of Aviation, Osita Chidoka, who represented former President Goodluck Jonathan, was reading the speech of the immediate past president who was the special guest of honour.

The announcement was greeted with a thunderous ovation from the audience as the 85-year-old spritely walked to the high table.

Mr Obasanjo, who ruled Nigeria in two different epochs, first as an unelected military Head of State from 1976 to 1979 and a democratically elected president from1999 to 2007, topped the list of dignitaries that graced the well-attended unveiling event.

Others were Ifueko Omoigui- Okauru, a former FIRS chairperson, who was the chief presenter of the book, former Senator, Babafemi Ojudu and the Director-General of the Nigeria Governors’ Forum (NGF), Asishana Okauru.

Mr Mojeed explained that the former Nigerian leader was the least likely invitee expected to show up at the event for many reasons.

First, the book was written without the former president’s authorisation.

Secondly, the invitation letter sent to him for the event was not acknowledged thereby leaving no words as to whether he would attend or not.

Thirdly, Mr Obasanjo was away on a week-long diplomatic engagement in Ethiopia.

However, the former president mystically surfaced at the unveiling rousing the event to its frenetic climax.

Mr Obasanjo in his remarks affirmed that he did not give the author permission to write the book though he enjoyed reading it.

“I did not intend to come. He (Mojeed) did not take my permission. Until last week when he brought me two copies, I did not know that he was writing the book. When I read the book, I was flabbergasted. I was torn between him not telling me and the amount of work he put in.

“I read a part and rang him. I told him, you have unearthed this part? This is good. I did not reply to his letter because I did not want him to quote me,” he said.

Mr Obasanjo explained that Mr Kukah convinced him to attend the book launch. “I met my Waterloo when I called Bishop Kukah, who told me he was reading my book. He told me to be here,” he stated. Mr Kukah was the reviewer of the book.

On how he went about his tight diplomatic schedules in Ethiopia to make it back to Nigeria and attend the event, he said it was not an easy task for him.

He said his programme schedule in Addis Ababa spilled deep into Thursday 1 December, the date of the boom unveiling. To squeeze out time, he requested the officials in Ethiopia to crash his two-day programme into one day. Subsequently, he said that he had to reschedule his meetings in Ethiopia by finishing his meeting on Wednesday 30 November.

Mr Obasanjo, who is regarded as one of Africa’s most respected former leaders, said that he found “The Letterman” amazingly good adding that he wholesomely recommends the book to people to read.

He, however, said he would have titled the book “Audacity of an Optimist.”

He added: “There are many things that I have forgotten, and he (Mojeed) presented them well. The reason why I don’t grant interviews is because journalists are like a nagging wife that has children for you. You just have to tolerate them. They will annoy you. Musikilu has one unique advantage, he tolerates me and I tolerate him…I believe in letter writing because you have to communicate. I don’t see any substitute for it.”

Mr Obasanjo said most of the letters he authored have stood the test of time.

According to him, the letters were not personal but about issues. He said in some instances, the letters are about providing solutions.

Speaking about the current state of affairs in Nigeria, he said the present administration has not been able to diplomatically manage the affairs of our neighbours. He cited the case of Chad and how Nigeria has left a leadership vacuum within Africa.

“God loves us so much that we have done so many stupid things and gotten away with it. I hope that His patience has no limit of elasticity,” Mr Obasanjo said. “The right lesson must be learnt. We have all that we need to have. God is not to blame for not doing what we should be doing.”

He said after reading the book, he will go back to his letters.

Mr Obasanjo said for refusing to take permission and conniving with some of his staff, he will decide the “punishment” to be meted out to Mr Mojeed

He jokingly added that Mr Dickson, who though is a lawyer but not practising, will “handle” Mr Mojeed when he (Dickson) starts practising law.