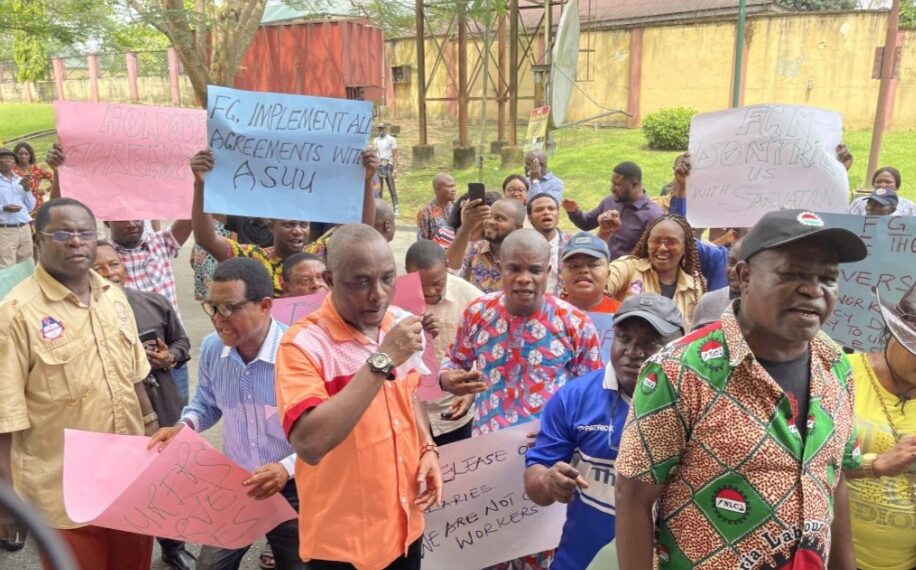 “The work that they said we have not done, we have done it now and the examination of first semester of 2020/2021 has been concluded."

The Academic Staff Union of Universities (ASUU), University of Calabar branch, has staged a peaceful protest to demand the payment of their eight months’ salary arrears from the Federal Government.

Chairperson of the union in UNICAL, John Edor, who led other members on the protest on Wednesday in Calabar, said members of the union were owed eight months’ salary arrears, from March to October.

Mr Edor said that in the month of October, members of the union were paid for 18 days, describing the payment as “daily payment” for workers.

He said ASUU was insisting on the revitalisation of universities, and that the welfare of university staff should be improved.

According to him, the non-payment of the withheld salary arrears has continued to cause untold hardship on the lecturers.

“The work that they said we have not done, we have done it now and the examination of first semester of 2020/2021 has been concluded.

“Right now, we are carrying two semesters hand-in-hand to make up for the lost period, yet we have not been paid.

“We were eligible for full payment for the month of October; beyond that, we are asking for the payment of the withheld months.

“Some members of our union have started receiving salaries and the report we are getting is not favourable to us.

“We are hoping that in the interest of our children, nation and students, the Federal Government should do the needful and pay us our withheld salaries and address the demands of ASUU,” he said.

Ms Obi, a professor, said the Federal Government was working towards putting necessary facilities in place to upgrade the status of public universities.

According to her, the university system should be revitalised in such a way that it will compete favourably with other universities across the world.

“I can assure you that the government is doing something towards revitalising public universities.

“It is sad that while we were on strike agitating for a better condition of service and an improvement of the facilities, our salaries were withheld.

“However, there have been several meetings behind the scene and well-meaning Nigerians have been pleading with the Federal Government to look into our case as a special one.

The VC, who commended the lecturers for working hard to meet up with the concurrent semesters, urged them to be patient while well-meaning Nigerians continue to dialogue with the Federal Government on the matter.

A call to deradicalise Igbo youths, By Fredrick Nwabufo