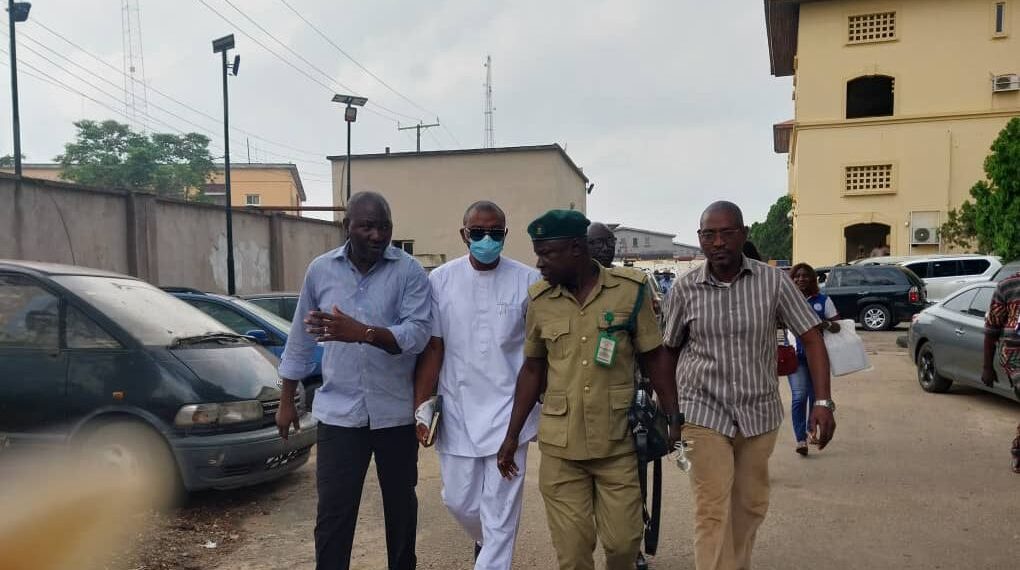 Femi Olaleye, (second from the left) a doctor remanded at the Ikoyi correctional facility over alledged sexual difilement of a minor.

Femi Olaleye was remanded pending the fulfillment of his bail conditions.

Femi Olaleye, a doctor at Optimal Cancer Care Foundation, has been remanded at the Ikoyi Correctional facility pending the fulfillment of his bail conditions.

Mr Olaleye is facing a two-count charge of defilement and sexual assault by penetration of his wife’s 16-year-old niece.

He was arraigned by the Lagos State government on Wednesday at the Sexual Offences and Domestic Violence Court, in Ikeja area of Lagos.

The doctor pleaded not guilty to the charge preferred against him.

The court granted him a bail of N50 million with two sureties in like sum.

On November 21, the scheduled arraignment of the cancer care advocate was stalled following his absence in court.

During the trial on Wednesday, Babatunde Ogala, counsel to the defendant, read out some portions of Mr Olaleye’s bail application, which was earlier filed in the court.

Mr Ogala asked the court to admit the defendant on bail on the grounds that he is ready to attend all the trials for the case.

The lawyer also said that the defendant is a leading cancer care advocate, whose patients will suffer if remanded in prison during the course of the trial.

The senior lawyer said the offences levelled against his client are not “grievous allegations like treason” that warrant death sentence.

The lawyer added that the behaviour exhibited by Mr Olaleye as it relates to his voluntary presence in court shows that he will comply with the conditions of the court.

He said the defendants came to court with “reliable and liable” professional colleagues who are ready to stand as sureties for him if granted bail by the court.

Countering the bail application, Babatunde Martins, a lawyer with the state government, said the offences leveled against the defendant is a serious crime in Lagos, which attracts life imprisonment.

Mr Martins said the prosecution team is concerned that the defendant has the tendency to interfere with the case, owing to his relationship with the claimants — his wife and the minor, who is the survivor.

Mr Martins argued that Mr Olaleye is flight-risk because he owes the Nigerian passport and probably possesses a British passport.

He asked the court to impose bail conditions that will ensure that the defendant attends his trial.

For the bail conditions, the judge said the defendant should provide two sureties with N50 million in like sum.

The judge asked Mr Olaleye to submit his international passport, British passport and all travelling documents to the court’s clerk.

The court fixed 19 and 21 December for the continuation of trial.

Mbaka spotted at US monastery