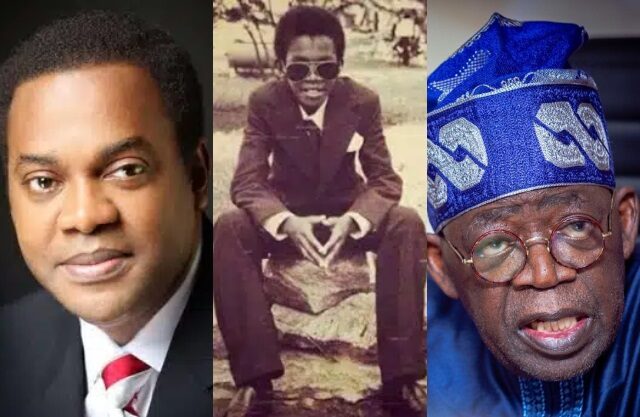 Former Cross River governor, Donald Duke, had claimed his picture was used in a documentary to depict the APC presidential candidate, Bola Tinubu.

The Presidential Campaign Council (PCC) of the All Progressives Congress (APC), says it did not issue an apology to a former governor of Cross River State, Donald Duke, for ‘using’ his pictures in a documentary.

The documentary titled “Bola Tinubu And His Political Journey” used some pictures to depict Mr Tinubu in his young age.

The documentary was aired on Television Continental, a station Mr Tinubu is believed to have interest.

Mr Duke, a member of the opposition Peoples Democratic Party (PDP), had last week accused the PCC of using his pictures to depict the former Lagos State governor in the documentary.

While speaking at an event hosted by the Front Fort Media Initiative and the MacArthur Foundation in Lagos, Mr Duke claimed that the picture was taken during his days at the Federal Government College, Sokoto.

“The picture of the boy used as Bola Tinubu in all the documentaries is me. I am the boy in the picture, not Tinubu as they claimed in their documentaries.

“That photo was taken when I was 12 years old during my school years at the Federal Government College Sokoto, in Sokoto State,” he said.

Some media platforms had published a statement purportedly from Bayo Onanuga, one of the spokespersons of the PCC, stating that the campaign had issued an apology to Mr Duke.

However, in a statement on Monday, Mr Onanuga dismissed reports, noting that the campaign did not issue any apology to Mr Duke.

“Our attention has been drawn to a press statement currently in circulation credited to the Director of Media and Publicity, Mr Bayo Onanuga.

“In the said statement, Mr Onanuga was reported to have apologised to Mr. Donald Duke for an error in the use of his picture in a documentary on Asiwaju Bola Ahmed Tinubu.

“We want to categorically state that the Directorate of Media and Publicity of the APC Presidential Campaign Council did not authorise the said statement and Mr Onanuga didn’t issue any statement on behalf of the campaign council and our principal, Asiwaju Tinubu today,” Mr Onanuga said.

Mr Tinubu’s past has been a very controversial issue, particularly the records of his education.