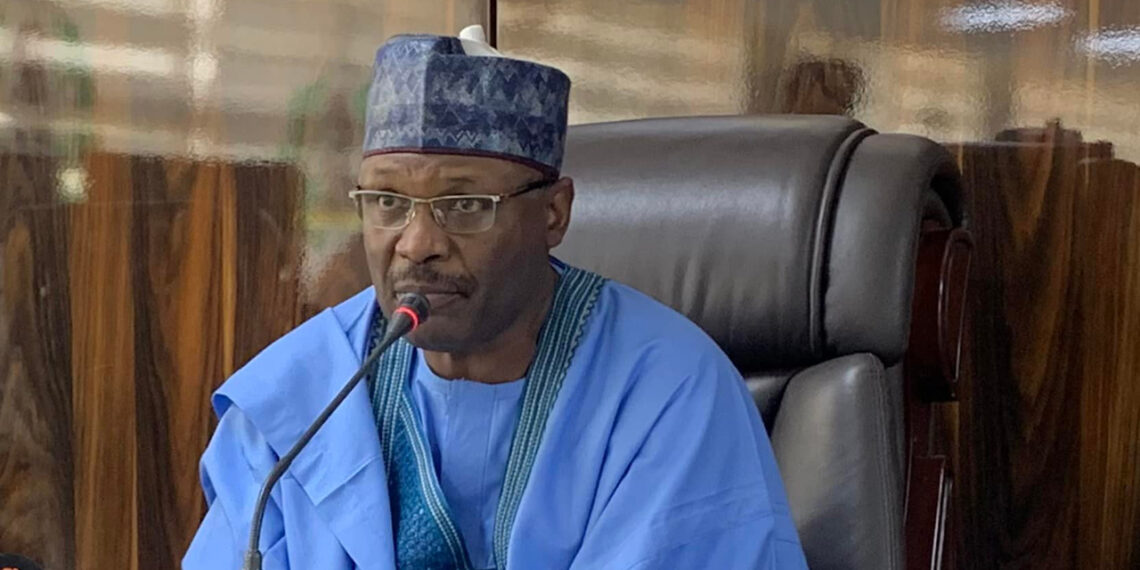 INEC offices have been attacked in three states - Ogun, Osun and Ebonyi States - in the last three weeks.

The Independent National Electoral Commission (INEC) says the recent attacks on its facilities will not stop the conduct of the 2023 general election.

INEC Chairman Mahmood Yakubu said this when he received a delegation from the Africa Union Special Pre-Electoral Political Mission led by Phumzile Mlambo-Ngcuka on Monday in Abuja.

Mr Yakubu, who acknowledged that some materials for 2023 general election were lost in the attacks, said INEC would replace them ahead of the election.

The commission’s offices have been attacked in three states – Ogun, Osun and Ebonyi States- in the last three weeks.

“In the last three weeks, three of our local government area offices were attacked in three different states of the federation and the last one occurred yesterday in the South-eastern part of the country.

“Although there were no casualties but quite a number of the materials already acquired and delivered for the elections have been lost.

“Now, the good thing is that so far, we can recover from all the losses but it’s a source of concern. This shouldn’t be allowed to continue.

“So, we will continue to engage with the security agencies to make sure that these offices as well as personnel and our facilities are protected ahead of the election,” he said.

Mr Yakubu said the deployment of Bimodal Voter Accreditation System (BVAS) and the Results Viewing Portal (IReV) for voter accreditation and uploading of PU results on real time had come to stay.

“We may express some concern about the attack on these facilities but it will never deter the commission from going ahead with the election as scheduled,” he said.

Mr Yakubu said there was no going back on the deployment of those technologies because it was a requirement of the law making it mandatory for INEC to do so.

He said between August 2020 and July 2022, the technologies were deployed for about 105 off cycle and by-election including the Anambra, Ekiti and Osun governorship elections.

Mr Yakubu said that the body of political parties, Inter-Party Advisory Council (IPAC) had also attested to their efficacy in election conduct.

“We are happy with the pilot that we have conducted and these are results you can still view on the portal.

“We kept asking particularly political parties to compare the results given to them at the point, that is the hard copy signed by their agents and what we uploaded on the IREV portal and we have been asking them if there are discrepancies.

“So far, all the political parties have confirmed that its 99.9 per cent accurate so we are happy with that pilot,” he said.

Mr Yakubu said that although INEC may suffer a little hitch here and there but overall, it was required to proceed with the election.

“We are required to proceed in the manner that the law requires us to do using the deployment of technology for the purpose of accreditation and uploading of Polling Unit level result from the PU on election day for transparency.

“The good thing is that since we started this process, we hear less and less of litigation arising from the conduct of elections by the commission.

“Now we have more litigations arising from the conduct of primaries by political parties rather than the main election conducted by the commission,” he said.

Earlier speaking, Mr Mlambo-Ngcuka said they were in Nigeria as partners on supportive mission.

Mr Mlambo-Ngcuka, a former deputy president of South Africa, added that the mission was very keen to ensure that Nigeria has peaceful and credible election process.

“We will like to hear from you how much you are prepared for this election. How much consensus? Is there a margin, on the electoral process and potential dialogue that you may need to encourage among the contesting parties as well as society.

“We will like also to know that the working relationship between yourself and the contesting parties is proceeding as expected.

“We’re also keen to hear about the role and contributions of CSO, women and young people in particular which we know as people are very much interested in the process and the outcome of this elections.

“And in general, all methods that you may want to share with us about these elections including how much supported you are financially and the means it takes to work for it,” Mr Mlambo-Ngcuka said.