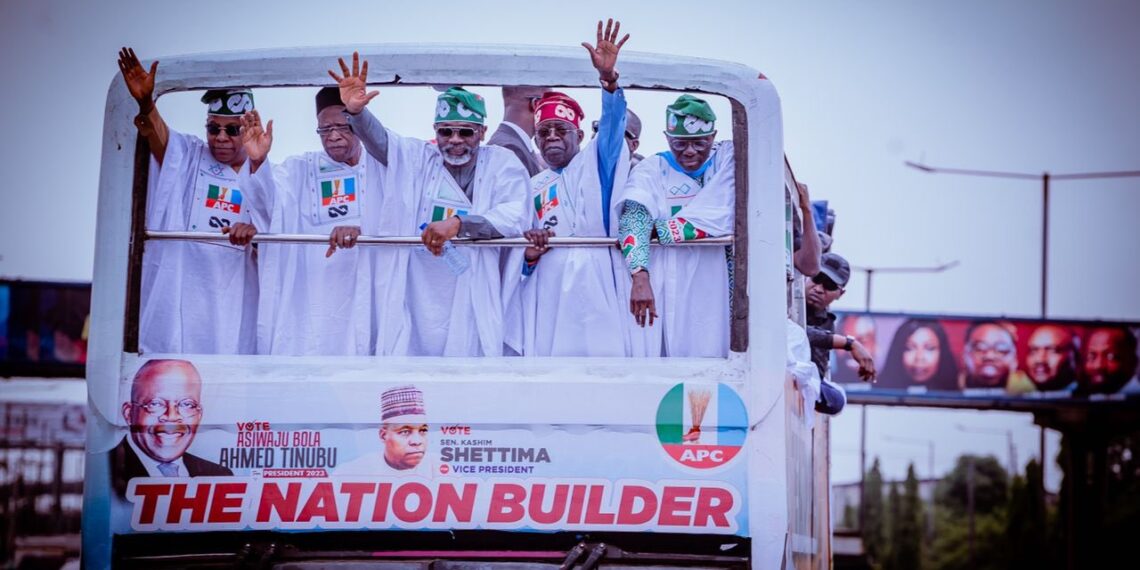 Thousands of the supporters dressed in various campaign clothes, T-shirts and caps of different colours were busy blowing trumpets, waving brooms, hoisting flags and other symbols of the party.

The traffic situation in Lagos metropolis on Saturday was worsened as the Presidential Campaign of the ruling All Progressives Congress (APC) at Teslim Balogun Stadium, Surulere held its rally.

The News Agency of Nigeria (NAN) reports that the rally is for the APC presidential candidate, Bola Tinubu and his running mate, Kashim Shettima ahead of the 2023 general elections.

NAN reports that Tinubu’s supporters with enthusiasm walked distance because of the congestion to access the venue, which was manned by heavy security presence.

Scores of campaign vehicles, mostly BRT, commercial buses and private cars, which conveyed party supporters to the venue of the rally, were parked on major roads.

The main bowl of the stadium had been filled to capacity and the premises of the venue as early as noon.

While the rally was yet to start as of the time of filing this report, so many supporters, who despite the scorching sun, were still struggling to gain entrance into the venue.

Thousands of the supporters dressed in various campaign clothes, T-shirts and caps of different colours were busy blowing trumpets, waving brooms, hoisting flags and other symbols of the party.

NAN reports that the popular Fuji star, Wasiu Ayinde, and other hip hop musicians entertained supporters in a live play at the event to the admiration of the participants.

Also at the event were Nollywood stars such as Yinka Quadri, Saheed Balogun, Eniola Ajao, Modupe Daramola, Taiwo Hassan, Terry G, among others.

There was tight security at the venue of the campaign, as security agencies and ad hoc security personnel were strategically situated at the different points of entries.

The security agencies ensured thorough searching of supporters of the APC before allowing entry. (NAN)