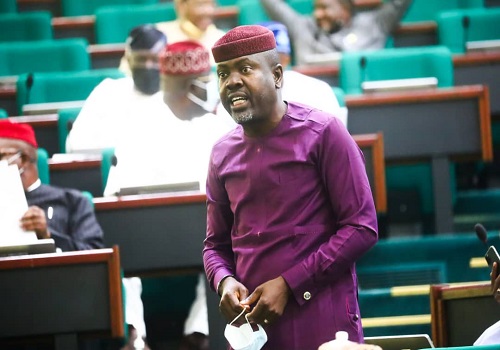 The current nominee, Mr Ogunmola, whose nomination is generating controversy, according to the lawmaker, is from the same Owo LGA as the one rejected by the Senate in 2016 for the same reasons.

Kolade Akinjo, the lawmaker representing Ilaje/Ese-Odo Federal Constituency, has urged the Senate to reject the nomination by President Muhammadu Buhari of Charles Ogunmola, the Executive Director (Projects) on the board of the Niger Delta Development Commission (NDDC).

Mr Akinjo said Mr Ogunmola’s nomination is against the Act that established the commission.

President Buhari had, on Wednesday, forwarded to the Senate the names of 15 nominees to fill the board of the commission as chairperson, executive directors, e.t.c

The lawmaker, while rejecting the nomination, said it is against “the letters of Section 12(1) of the Niger Delta Development Commission (NDDC) (Establishment etc) Act, 2000 (hereinafter referred to as NDDC Act) which provides that:

The lawmaker argued that Mr Ogunmola, who is from Owo Local Government Area, is not from any of the oil-producing communities in Ondo South, especially in Ilaje and Ese-Odo local council areas.

The lawmaker said while he acknowledged the power of the President to nominate for an appointment on the Board of NDDC, he said such nomination must be in tandem with relevant provisions of the Act establishing the Commission.

Mr Akinjo reminded the Senate that it rejected a nominee, Adetokunbo Ajasin, in 2016, when his nomination was deemed to have been against the Act establishing the commission.

The current nominee, Mr Ogunmola, whose nomination is generating controversy, according to the lawmaker, is from the same Owo LGA as the one rejected by the Senate in 2016 for the same reasons.

Mr Akinjo called on the President to nominate an indigene of Ilaje/Ese-Odo Federal Constituency to fill the position of Executive Director (Projects) in accordance with the provisions of the NDDC Act.

Read his full letter below:

With immediate necessity and utmost concern for the good people of the largest coastline in Nigeria – Ilaje/Ese-odo federal constituency – that I am privileged to represent currently in the National Assembly, and on whose instructions I write, with full respect for your office, the Senate of the Federal Republic of Nigeria, and after due consideration of the letters of Section 12(1) of the Niger Delta Development Commission (NDDC) (Establishment etc) Act, 2000 (hereinafter referred to as NDDC Act) which provides that:

This letter seeks to draw the attention of your Excellency to the erroneous nomination of Mr. Charles Ogunmola as nominee for the position of Executive Director of Projects on the Board of Niger Delta Development Commission (NDDC) by the President and Commander in-Chief of Armed Forces of Nigeria, President Muhammadu Buhari while exercising his power pursuant to Section 2(2)(a) of the NDDC Act and to urgently notify the Senate of our rightful and lawful rejection of the said nomination on the ground that such is not in compliance with the provision of Section 12(1) of the enabling aforementioned Act.

We are fully armed with the knowledge of the power of the President to nominate for an appointment on the Board of Niger Delta Development Commission but such nomination must be in tandem with relevant provisions of the Act establishing the Commission.

Undoubtedly, Mr. Charles Ogunmola, an indigene of Owo in Owo Local Government Area, a non-oil-producing area in Ondo North Senatorial district of Ondo State, is not qualified for nomination as Executive Director. Although for the record, Mr Charles Ogunmola is eminently qualified for appointment as representative of South West, if the Act so permits, but he is clearly not eligible for appointment as Executive Director because he is not an indigene of an oil-producing area as mandatorily required by Section 12(1)(b) of NDDC Act.

Recall that in 2016, a great legislative precedent was laid by this Senate when it rightly rejected the nomination for appointment on the Board of Niger Delta Commission (NDDC) of one Mr Adetokunbo Ajasin, an indigene of Owo in Ondo North senatorial district of Ondo State, on the ground that his nomination flagrantly contravened the mandatory provision of Section 2(1)(b) of the NDDC Act which requires that only an indigene of an oil producing area shall represent each of the member States of the Commission.

On the strength of the above well laid foundation and unassailable premise, we humbly reject the nomination of Mr Charles Ogunmola as Executive Director of Project and urge the Senate to step down his ratification and also call on the President to appoint in his place an indigene of the oil-producing area in Ilaje/Ese-Odo federal constituency of Ondo State. This will go a long way in ensuring the sustainability of the aged-long bond, cohesion, and understanding between the people and their government and ultimately guarantee full confidence in this government as one being anchored on the rule of law.

This nomination is indeed an injury to the collective survival of my people. On this note, I therefore, seek the unmitigated solidarity of the Red Chamber to rectify this obvious injustice.

I am confident that this correction in line with enabling enactment shall impact our people for greater development.

Yours in National Service