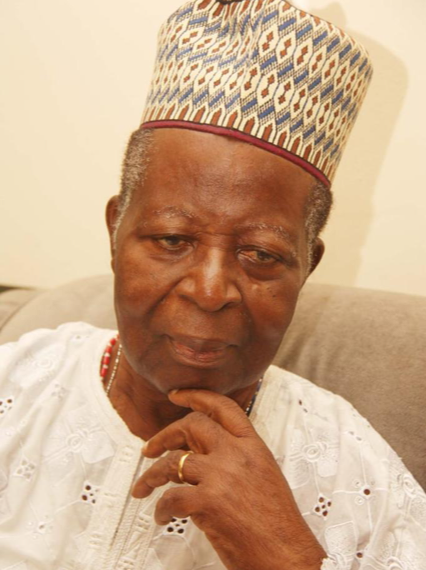 Before his death, Mr Omoigui was chairman of the DAGOMO Foundation, an organisation established to raise elderly care in Nigeria and the world.

Mr Omoigui died on Thursday, his family said, 14 days after his 91st birthday.

“The family of Surveyor Daniel Aiyanyo Omoigui of the Egite family, Isi in Uhunmwode LGA, Edo State and the entire Egite family of the Edo Kingdom and Barrister Mrs Grace Onaiwu Omoigui nee Asemota (late) and the entire Asemota family of Ogbe Quarters, Oredo LGA, Edo State, is heartbroken yet thankful for a life of legacy well spent as we announce the passing of our dearly beloved father and grandfather – Surv. Daniel Aiyanyo Omoigui – who was called to rest in the Lord on November 24, 2022,” his oldest surviving son, Sota Omoigui, said in a statement sent to PREMIUM TIMES on Friday.

The late Mr Omoigui was well regarded for resolving knotty boundary disputes among the country’s federating units by initiating the establishment of the National Boundary Commission, and especially through the work he and his team at the Department of Survey did, beginning after the civil war in 1970.

He was also involved in the negotiation between Nigeria and Cameroon on the Bakassi Peninsula. That territory was later ceded to Cameroon, following international adjudication, and he believes that was the right decision, despite the anger of Nigeria over the ruling.

According to a short profile provided by his family, he started school at age three in a newly established school in the village, went to a number of primary schools and in 1939, he joined Benin Baptist School, starting from Form II.

In 1947, the government ordered the whole school in Benin to move to Asaba and he moved to Saint Patrick College, formerly Saint Augustine, Asaba, where he was given double promotion owing to his level of brilliance. He then finished his secondary education in less than four years in 1949.

In 1950, he took up a teaching job at Niger College, Benin. While he enrolled for studies at the Rapid Result College, which is now known as Distance Learning.

In 1953, he sat for the entrance exam into the University College, Ibadan, passed the exams and gained admission for further studies by October of that same year. In June, he wrote the Intermediate B.Sc. examination at the University of London and the result came in early December. He passed but could not attend.

In the course of the period, he entered into student politics while studying Mathematics. He graduated from the University of Ibadan in 1957.

He later left Nigeria and was trained at the Royal School of Military Survey, Newbury Berks, England (1958-1959); the International Institute for Geo-information Science and Earth Observation, The Netherlands (1973) and the University of Pittsburgh, U.S.A. (1976).

He joined the Federal Surveys in 1957 and worked extensively in different parts of the country. In 1969, he was in charge of investigations, delimitation, demarcation and maintenance of international and interstate boundaries.

In 1970, he built the boundaries unit in Federal Surveys and, subsequently, participated in the Nigeria-Cameroon boundary negotiations.

As Director of Federal Surveys, he spearheaded the establishment of the National Boundaries Commission, and the Surveyors Registration Council (SURCON).

He retired as Surveyor-General of the Federation in 1988, the first person to occupy the position after the reforms he drove granted autonomy to the Survey Department.

After retirement from public service, Mr Omoigui worked as Chairman at Terra Information Services Ltd. He was until his passing, Chairman of DAGOMO Foundation Nigeria LTD/GTE, founding director and former chairman of ReStraL Ltd and Sakoko Holdings Ltd respectively.

He gave fully of himself to any endeavour he was involved in. He was a loving husband and a devoted family man. The principles he lived by in his entire life and which he passed to his children and all persons he touched were honesty, fairness and integrity.

We pray to our Lord to grant him eternal rest.

Friday Sermon: Towards a successful and blissful marriage, By Murtadha Gusau