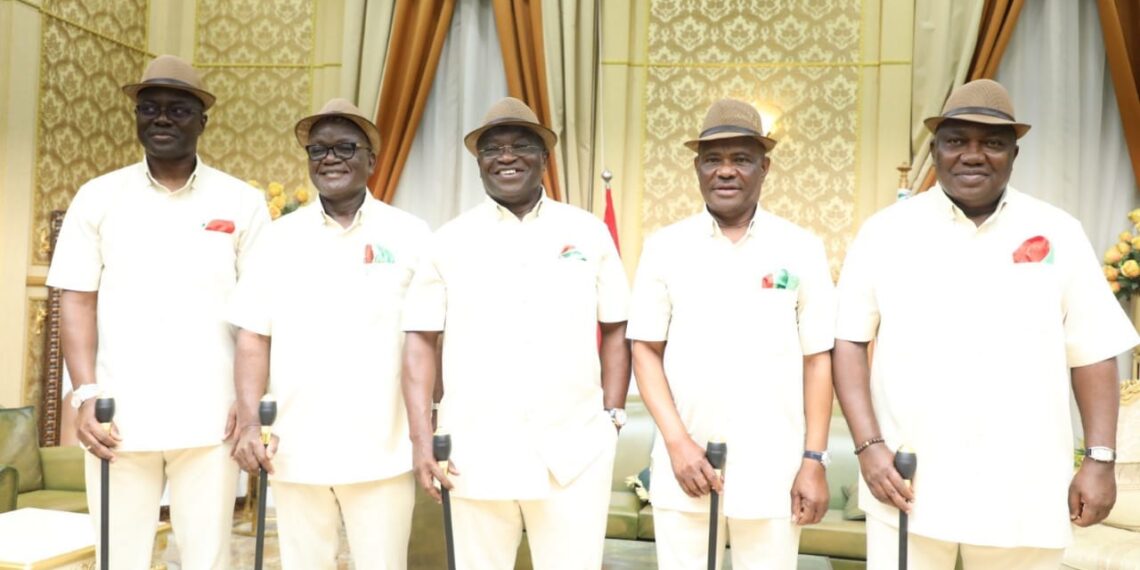 The governors took the decision on Wednesday at a meeting in Yenagoa, Bayelsa State.

As crisis deepens in the Peoples Democratic Party (PDP), governors from the South-south region of the country elected on the PDP platform have resolved to meet their G5 colleagues to reconcile issues arising from the last National Convention of the party.

The governors took the decision on Wednesday at a meeting in Yenagoa, Bayelsa State, AIT said, in its report.

The Nigeria’s main opposition party, PDP has been enmeshed in crisis after the party’s national convention in May where former Vice President Atiku Abubakar defeated 12 other aspirants, including Rivers State Governor, Nyesom Wike, to emerge the party presidential candidate for 2023 elections.

Dissatisfied with the outcome of the primary, Mr Wike now leads a group of five PDP governors (G5) who are demanding the replacement of the party’s National Chairman, Iyorchia Ayu with a southerner to correct “regional imbalance” in the PDP since Messrs Atiku and Ayu are both northerners.

Apart from Mr Wike, other governors who are members of the G5 are Samuel Ortom (Benue), Ifeanyi Ugwanyi (Enugu), Okezie Ikpeazu (Abia) and Seyi Makinde (Oyo).

The G5 governors, who were appointed into the PDP presidential campaign council, withdrew their membership and boycotted its inauguration.

They were also absent at the flag-off of the PDP presidential campaign in Uyo, Akwa Ibom State, and have continued to boycott activities organised by Mr Atiku and the national leadership of the party.

At their meeting in Bayelsa State, which Mr Wike was conspicuously absent, the South-south governors resolved to meet with their G5 colleagues to address the six months old crisis which may affect the party chances at next year’s election.

The governors at the meeting empathise with the people of Bayelsa State on the recent flood that ravaged the state.

They reaffirmed their support for the PDP presidential candidate, Mr Atiku and his running mate, Ifeanyi Okowa.

According to the AIT report, the governors went into a close-door meeting after which the host, Douye Diri, told reporters that he was optimistic the PDP would emerge victorious at all levels in the 2023 election, including the presidential election.

The meeting had the party’s vice presidential candidate and governor of Delta State, Mr Okowa, and governors of Akwa Ibom, Bayelsa and Edo states in attendance.