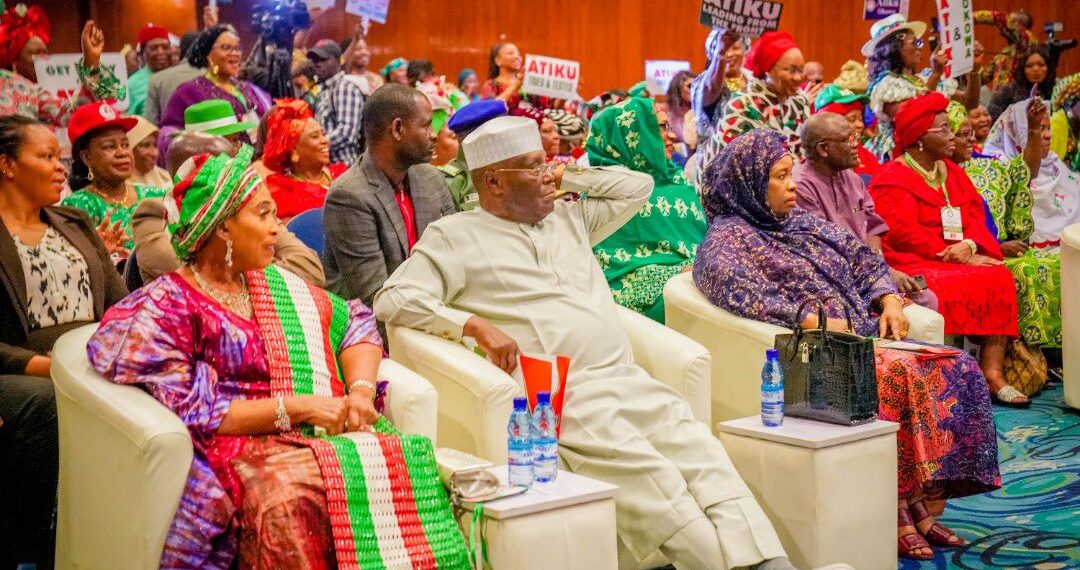 Atiku says the main objective of setting up the women campaign council is to ensure women’s active participation in the 2023 general election and leadership of the country.

The Presidential Candidate of the Peoples Democratic Party (PDP), Atiku Abubakar, has urged Nigerians women to deliver their polling units for the party in the 2023 general election.

Atiku, at the inauguration of the party’s Women Presidential Campaign Council on Wednesday in Abuja, said with full support and participation of women in 2023 elections, victory is sure for PDP.

He challenged the party women to get the leaders needed for the country by giving their 100 per cent support to the PDP.

“I remember during the Social Democratic Party (SDP) days, we used to have this type of election where supporters or voters queued behind either the candidate or the photograph of the candidate.

“Any time I went to my ward and I stood and there was an election, the queue of women was always three times that of the men.

“So that’s why I believe that with you and your full support and participation, victory for PDP is assured.

“So, I like to call on Nigerian women to really come out. Campaign, make sure you vote and make sure your votes are counted and protected,’’ Atiku said.

“I want to see a strong representation from the women campaign council so that as the PDP has outlined, if you want to be relevant, deliver your unit and I believe you can,’’ Atiku said.

He said the main objective of setting up the women campaign council is to ensure women’s active participation in the 2023 general election and leadership of the country.

“By your active participation, we will be able to identify the talents among you so that we can hunt those talents to help us build this country.’’

Atiku tasked the women campaign council to come up with strong representation to canvass support for the PDP.

He also re-emphasised his commitment that as long as he remains in politics, he would promote the advancement of PDP.

The PDP National Chairman, Iyorcha Ayu, described PDP as a political party that gives special place to women, recognising them as partners in progress.

He added that PDP also went out of its way in its 16 years in government to ensure that women were reasonably represented in government.

Mr Ayu said that Atiku, if elected, would change Nigeria for the better and would promote the course of women in the country.

“When he (Atiku) was the vice president of this country, I knew exactly what he did in promoting women.

“Some of them he single-handedly headhunted because of their capacity and brought them into government. Many have become recognised not only nationally but internationally.

The PDP National Women Leader, Stella Effah-Attoe, pledged that the women would use their natural influence to mobilise support and vote for the PDP and Atiku.

Mrs Effah-Attoe said that the Women campaign council would serve as the bedrock and biggest chunk of geometric mobilisers of the Nigerian electorate to vote massively for Atiku and all PDP candidates across elective positions.

“Let me reassure you that our unalloyed solidarity and commitment towards the success of our great party in the 2023 general elections are unwavering.

“The PDP women are ready, our strategies and approaches are top notch and clear cuts.

“We will campaign and mobilise from every home, family, pooling units, wards, local government, state and even the FCT to garner all the votes that will be needed to make our party coast home to victory in a landslide manner.‘’

The wife of the presidential candidate, Titi Abubakar, called for collective effort to elect Atiku to address the challenges facing Nigeria.

“It is pertinent to note that serious issues bedevilled our nation, such as insecurity, the educational sector, the health sector, and infrastructure has continued to drive the citizens of this country to seek for a new leadership direction and political paths,’’ she said.

She said that the Atiku-Okowa ticket, when elected, would promote the welfare of women in the country.