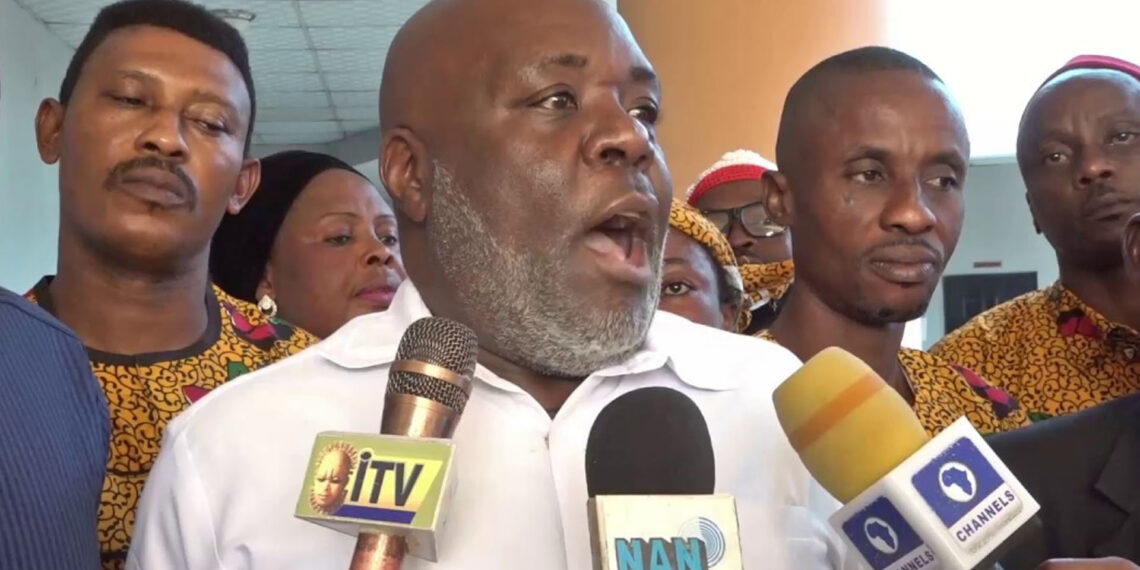 The Inspector General of Police had filed a 14-count charge against the factional National Chairman of APGA and his co-defendant for their alleged involvement in the crime.

The Federal Capital Territory (FCT) High Court at Bwari, Abuja, on Monday, ordered the arrest of Edozie Njoku, a factional National Chairman of the All Progressive Grand Alliance (APGA), for allegedly forging a judgement of the Supreme Court.

Mohammed Magudu, the judge, issued the arrest order in a ruling on Monday following Mr Njoku and his co-defendant, Chukwuemeka Nwoga’s failure to appear in court for their arraignment.

The Inspector General of Police, Usman Baba, had filed a 14-count charge against the duo for their alleged involvement in the crime.

In an oral request, Rimamsomte Ezekiel, the prosecuting lawyer, urged the court to order Messrs Njoku and Nwoga’s arrest.

Mr Ezekiel told the court that the defendants were served with the charge and hearing notice of Monday’s sitting.

In his ruling, the judge ordered the police to arrest the fleeing defendants and produce them in court on 28 November for arraignment.

Earlier, Mr Njoku’s lawyer, Panam Ntui, questioned the mode of service of the charge on his client.

He said Mr Njoku travelled out of Abuja, urging the judge to reschedule the defendants arraignment to enable his client return.

In the charge, Messrs Njoku and Nwoga are accused of falsifying a judgment delivered by the Supreme Court on 14 October, 2021 in the appeal marked: SC/CV/686/2021 and inserting Njoku’s name as the second defendant when he was never a party in the case.

They were said to have written four justices of the Supreme Court- Mary Odili, Kudirat Kekere-Ekun, Mohammed Garba and Ibrahim Saulawa who sat on the case, asking them to insert Mr Njoku’s name as the second respondent.

The defendants were accused of procuring the services of some officials of the apex court who inserted Mr Njoku’s name on the judgment, which Mr Njoku allegedly tendered to the Independent National Electoral Commission (INEC) and the IGP.

Mr Njoku in the allegedly forged judgement, claimed the Supreme Court had declared him as APGA’s National Chairman.

In one of the charges, Messrs Njoku and Nwoga alongside others who are now at large “dishonestly and deliberately forged the judgement of the Supreme Court of Nigeria.. with the name of Chief Edozie Njoku as the second respondent, knowing that he was not a party to the case, using same as a genuine judgment of the Supreme Court with the intent to mislead members of the public, and ridiculing the Judiciary of the Federal Republic of Nigeria.”

The alleged offence is said to be in breach of Section 366 of the Penal Code Law.

In another count, the police accused the defendants of fabricating “a letter to the Inspector-General of Police under false pretence that” Mr Njoku is APGA’s National Chairman, an offence punishable under Section 178 of the Penal Code Law.

The police accused Mr Njoku of forging APGA’s letter-head, which he used to the IGP as the party’s National Chairman, an offence punishable under Section 366 of the Penal Code law.