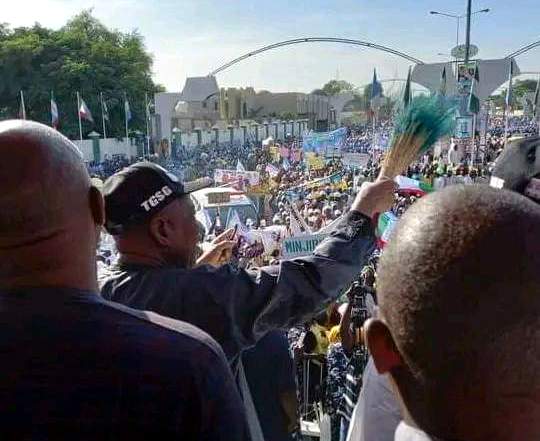 2023: Kano will not tolerate violence during campaign – Ganduje

Mr Ganduje said the state government will not allow violence during election campaigns.

The Governor of Kano State, Abdullahi Ganduje, promised that he would facilitate a violence-free campaign across the state for the fourth coming 2023 elections.

Mr Ganduje stated this on Sunday in Kano during a solidarity support procession tagged ‘One million March’ for the Presidential candidate of the All Progressive Congress (APC), Bola Tinubu.

“The Kano is 100 per cent for Tinubu and Kashim Shettima, the APC in Kano is solid and intact, and we have completed all arrangements to ensure free, fair elections in kano.

“We assure you there will be no quarrelling during our campaigns, no fighting, we are united with members of the opposition political parties, I will soon invite all governorship candidates and other contestants for dinner so that we can assure Nigerians there will be free and fair campaigns in Kano,” Mr Ganduje said while receiving thousands of youth who marched for the APC in Kano.

Mr Ganduje told the crowd to desist from coming to venues of campaigns with weapons. He said the state government would deal decisively with anyone found with weapons during campaigns.

In March PREMIUM TIMES reported how a clash between the supporters of two governorship aspirants in Rano Local Government resulted in deaths and disruption of the political gathering.

Mr Ganduje was at the event to inaugurate the executive committee of the APC in Rano Local Government. The event turned bloody with fatalities and many others injured.

In that ceremony in March, a fight broke out at the event between the supporters of Murtala Garo, the then Commissioner for Local Government Affairs, and those of Kabiru Rurum, a member of the House of Representatives representing Rano, Kibiya and Bunkure federal constituency.

Both men were contesting to succeed Mr Ganduje as Governor on the ticket of the APC in 2023.

Mr Garo is now the APC deputy governorship candidate, while Mr Rurum, has defected to the NNPP.

The Kano March was attended by Seyi Tinubu, Mr Tinubu’s son and Mr Ganduje’s sons, who trekked for many kilometres in a show of solidarity for the APC presidential candidate.

The youth were received by Mr Ganduje at the Government House, alongside the APC governorship candidate, Nasir Gawuna; Senate Appropriation Committee Chairman, Barau Jibrin; and the APC chairman in the state, Abdullahi Abbas, among others.

Man, 45, beats wife to death in Ogun over possession of private school