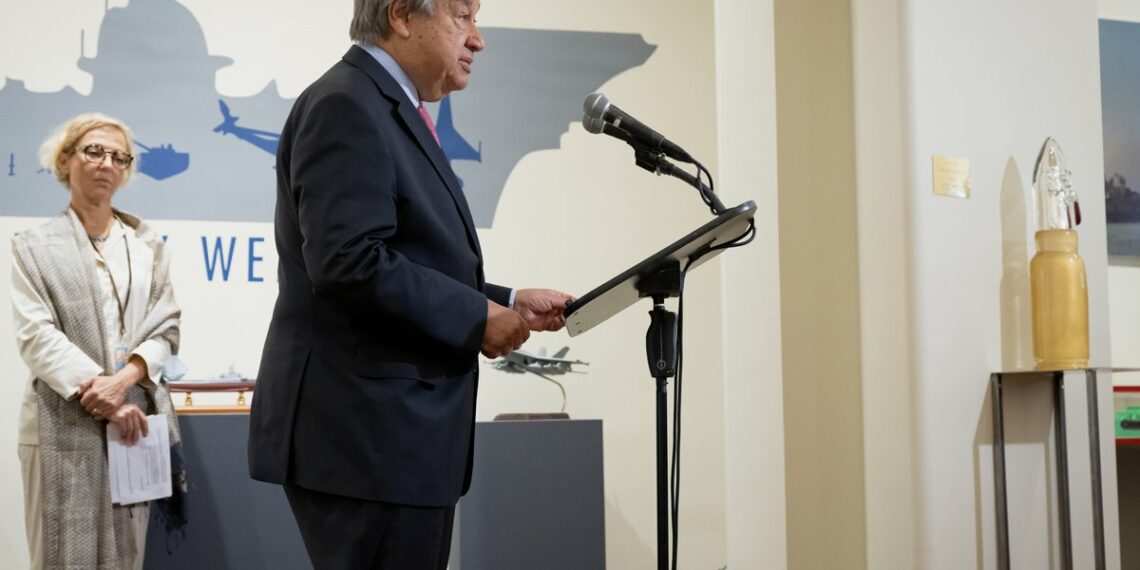 Mr Guterres welcomed the agreement on the loss and damage fund but said it is not enough.

The United Nations has warned that the world must not cross the red line that takes global temperature above the 1.5 degrees limit.

Speaking at the closing plenary of the global climate summit earlier on Sunday, the UN Secretary-General, Antonio Guterres, said to have any hope of keeping to 1.5 degrees temperature limit, the world needs to “massively invest in renewables and end addiction to fossil fuels.”

Mr Guterres welcomed the agreement to establish a loss and damage fund and the UN’s readiness to support the move.

He, however, noted that it is not enough.

“Clearly this will not be enough, but it is a much-needed political signal to rebuild broken trust,” he said.

As agreed by the conference, the new loss and damage finance scheme will see donors contribute to a global fund to save lives and livelihoods from climate change-related disasters.

Mr Guterres further noted that “our planet is still in the emergency room, we need to drastically reduce emission now and this is an issue this COP did not address,” adding that a fund for loss and damage is essential but not an answer if the climate crisis washes a small island state off the map or turns an entire African country into a desert.”

Additionally, he said, the world must avoid an energy scramble in which developing countries finish last just like in the race for COVID-19 vaccines.

Doubling down on fossil fuels, Mr Guterres said it is “double trouble” and that just energy transition partnerships are important for accelerating the phasing out of coal and scaling up renewables.

“But we need much more,” he said as he reiterated the importance of a climate solidarity pact which he talked about in his opening remarks two weeks ago.

“A pact in which all countries make an extra effort to reduce emissions this decade in line with the 1.5-degree goal, a Pact to mobilise, together with international financial institutions and the private sector, financial and technical support for large emerging economies to accelerate their renewable energy transition,” he explained, underscoring that this is essential to keep the 1.5-degree limit within reach.

Mr Guterres noted that the climate summit ends with “much homework and little time” adding that the world was already halfway between the 2015 Paris agreement and the 2030 deadline.

“We need all hands on deck to drive justice and ambition,” he said. This ambition includes stopping the suicide war on nature which is fuelling the climate crisis.

He commended members of civil society organisations who were visibly vocal at the conference with different demands and “keeping the agenda moving through the darkest days.”

He called for the protection of young people, “to all of them, I say we share your frustrations but we need you now more than ever.”

“Justice and ambition require the essential voice of civil society. The most vital energy source in the world is people’s power, that is why it is so important to understand the human rights dimension of climate action,” he said.

He urged all not to relent in the fight for climate justice and climate ambition, saying: “we can and must win this battle for our lives.”

The AFP reported France as saying it regretted the “lack of ambition” in the agreement reached at the COP27 climate summit in Egypt despite progress on providing funding for vulnerable countries.

“No progress” was made on making additional efforts to reduce greenhouse gas emissions and abandoning fossil fuels, energy minister Agnes Pannier-Runacher said in a statement.

“What we have in front of us is not enough of a step forward for people and the planet. It doesn’t bring enough added efforts from major emitters to increase and accelerate their emission cuts,” AFP quoted European Commission Vice President Frans Timmermans as saying.