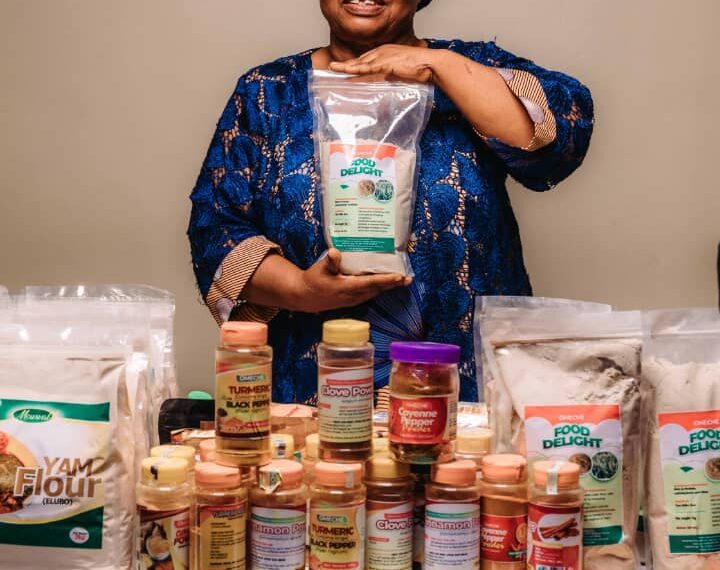 The food processor, a retired civil servant, asks the government to give women farmers grants, not loan.

Janet Adejoh, the Benue State coordinator of the Smallholder Women Farmers Organisation of Nigeria, and a pensioner, depends on the proceeds of her farm and mini food processing firm for survival. She laments the difficulties she faces in raising capital to fund her business.

In this episode of our series, she speaks about the efforts the association is making to assist female farmers who have been affected by the recent flood that occurred in many states including Benue.

Tell us about your journey in Agriculture

I am a retired public servant, I worked with the Agriculture Development Project, and I have a masters degree in Agricultural Seed Marketing and Management. I have been a farmer for over 20 years and it is also a generational thing because the environment encourages activities like agriculture. But recently I have not been so active in it because of my age, so I began processing and producing finished products.

Why did you move away from farming?

I left because of old age. I could no longer actively engage in farming. I told myself instead of stressing, I should begin processing.

Since you are a member of SWOFON, have you benefitted from government projects?

Recently, there have been issues of flood and your state is one of the most affected states, tell us how this has affected you and other women there.

Even before the flood came, it was COVID-19, after that then this flood, this year’s flood was massive, it affected so many women. It didn’t affect me because I don’t farm close to the river and I don’t reside close to the river.

Have your association assisted women who have lost so much to the flood, what has the government also done for these women?

We are compiling the list of people who have been affected by the flood, we had a meeting with the Minister of Agriculture regarding the issues, and we will submit the list to the All Farmers Association of Nigeria (AFAN), farmers in Bauchi state had training on dry land farming, I hope they bring it to other states so people can benefit. We hope the government will assist them soon.

A survey by SWOFON revealed that most pesticides used by women in four states including Benue are harmful to the health and in most cases cause diseases such as cancer, what alternatives should be used?

I use inorganic pesticides. You know most of these farmers are illiterates and have no training on the use of pesticides. Women put the chemicals in a basin and mix them with water. They use cassava leaves to sprinkle without using nose masks, sometimes they have their babies on their backs while doing it. They should concentrate on animal dung. Making inorganic manure is very expensive. I use wood ash, pepper, neem seed and a lot of others. I organise training on the use of pesticides.

Let’s move away from the issues around flood and pesticides, what hurdles do you face to access land?

Women don’t have the right to own land, either in their husband’s houses or their father’s houses. It’s either we borrow or hire. SWOON through ActionAid has engaged traditional rulers to be able to give women land rights.

We had a meeting in September, and the Director of Agriculture in Benue said the government owns the land and any woman who needs land can use it. We want to engage the ministry to ensure it is true.

How much do you pay to lease or rent the land?

I pay N10,000 per hectare monthly. But for now, I’m not actively engaged in farming, I’m into processing.

Benue seems to be a hotspot for attacks on farmers by herders. What is the impact of these on you as a woman farmer?

In Benue state, thousands of people have been displaced as a result of the clash, most of the victims are women and children. It may not have affected me so much. The clash makes it difficult to get labourers to work on the farm because they are afraid. Young people are no longer interested in farming, they run away to urban areas

You process farm outputs and you solely depend on farmers, are there times these farmers fail to meet up with the number of inputs you need for production?

Well I get from other states, I belong to a cooperative. These crops are seasonal, there is hardly a shortage of goods because I inter buy from other states. I have other challenges, the issue of transportation, the roads are bad. The cost of moving these goods is expensive.

For the cooperative, is there any cost implication in becoming a member, and what are the benefits?

Well, every group has dues, people don’t value free things. You pay to become a member of SWOFON, just N1000.

As a pensioner in Benue, I understand your entitlements are not regular, and the farming business is not as lucrative as expected, how did you raise capital to begin processing?

I have very small funds, most times I use the money my children send to me for feeding to invest in my business. It is hard to sustain the business.

Mechanisation is the big elephant in the room, how do you address the use of crude implements?

In 2020, women farmers went to the museum to drop the hoes, cutlass and others. We made the demand but the response has been very slow.

You employ people for your production, which gender do you give preference to?

Well I employ both. They have different capacities.

What are your final words for us?

Female farmers should be given grants, if you give a woman a loan, she can hardly pay. The farming business is now a huge loss, especially for women farmers. Farm inputs come late, like fertiliser and all. The government should make the provision early for farmers, in fact before the rainy season. They provide the inputs around July when the farming season starts around March.