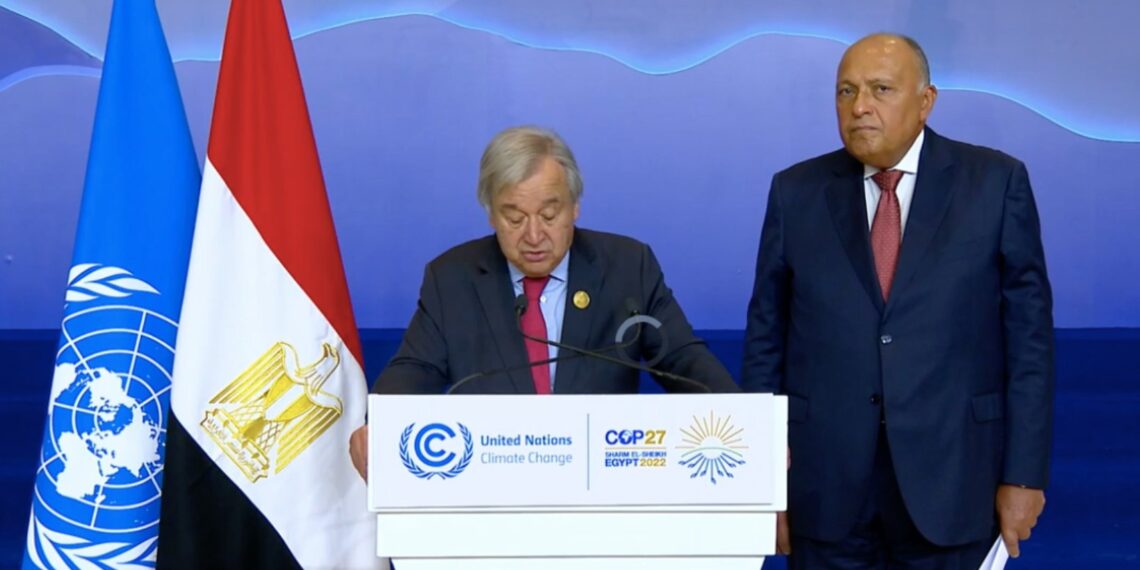 UN chief António Guterres tells negotiators at #COP27 that time for talking about loss & damage finance is over - We need action.

Mr Guterres lamented that the global emissions are at their highest level in history.

The United Nations Secretary-General, Antonio Guterres, has said the scale of “loss and damage” caused by the devastating impacts of climate change across the globe is undeniable by anyone and that “all parties should show that they see it.”

The UN official disclosed this while delivering his remarks at the COP27 stakeout event on Thursday, a statement by the organisers said.

“No one can deny the scale of loss and damage we see around the globe. The world is burning and drowning before our eyes,” Mr Guterres said.

He said global leaders cannot continue to “deny climate justice to those who have contributed least to the climate crisis ( Africa) and are getting hurt the most.”

“Now is a moment for solidarity,” he added.

At the ongoing United Nations Climate Change Conference (COP27) in Egypt, a major agenda being put forward at the negotiation table by the African Group of Negotiators (AGN) including Nigeria is “loss and damage” which emphasises financial compensation for the ravaged nations.

This, they say, will help to compensate helpless countries in Africa that contribute less than 4 per cent to the global emission to upscale adaptation and mitigation efforts towards coping with the lingering scourge of climate change on the continent.

However, as the two-week-long summit is drawing to a conclusion in less than 24 hours, the African negotiators have expressed concerns over lack of progress on loss and damage in the negotiations room.

The group said the position of Africans is not a contest for vulnerability, but the COP decisions have recognised Africa, and science alludes to the fact that Africa is a continent plagued by complex overlapping challenges, and many generations of Africans have been left behind and suffer consequences of actions not of their own making.

“We are concerned about the lack of progress on various issues of importance to our group, particularly on finance, adaptation and loss and damage. However, with a few days remaining, we believe we can still deliver on all work streams, including on adaptation, loss and damage, mitigation and means of implementation,” the group said on Tuesday.

According to the African group of negotiators, Africa has the lowest historical and current emissions, noting that AR6 also estimates that adaptation costs in developing countries will reach $127 billion, of which Africa needs up to $86.5 billion annually by 2030,” the statement quoted.

Amidst these lingering concerns, Mr Guterres said there is clearly a “breakdown in trust” between North and South and between developed and emerging economies.

He said: “We are at crunch time in the negotiations.

“COP27 is scheduled to close in 24 hours – and the Parties remain divided on a number of significant issues. This is no time for finger pointing. The blame game is a recipe for mutually assured destruction.”

The UN boss asked all parties to rise to this moment and to the greatest challenge facing humanity because the world is watching and his simple message to all parties is to “stand and deliver” a meaningful climate action that people and the planet so desperately need.

Mr Guterres lamented that the Global emissions are at their highest level in history which is still rising, and that climate impacts are decimating economies and societies.

“We know what we need to do — and we have the tools and resources to get it done. And so I appeal to the parties to act in three critical areas,” he said.

Mr Guterres said the most effective way to rebuild trust is by finding an ambitious and credible agreement on loss and damage and financial support to developing countries.

He said the time for talking about loss and damage finance is over.

“We need action,” he reiterated, urging all parties to show that they see it and get it, and send a clear signal that the voices of those on the frontlines of the crisis are finally being heard.

“Reflect the urgency, scale and enormity of the challenge faced by developing countries,” Mr Guterres said.

Likewise, he appealed to all parties to forcefully address the huge emissions gap.

“I see the will to keep to the 1.5 goal – but we must ensure that commitment is evident in the COP27 outcome,” he noted.

“Any hope of meeting the 1.5 target requires a step change in emissions reductions. We cannot close the emissions gap without an acceleration in the deployment of renewables.”

On the just energy transition moves by parties, Mr Gutterres said partnerships are important pathways to accelerate the phasing out of coal and the scaling up of renewables and that such effort must be expanded.

More broadly, he noted that there is a need to keep pushing for a Climate Solidarity Pact— a pact with developed countries taking the lead in reducing emissions and a pact to mobilise – together with International Financial Institutions and the private sector, financial and technical support for emerging economies to accelerate their transition to renewable energy.

This, Mr Guterres says is essential to keep the 1.5 degree goal within reach and that renewables are the exit ramp from the climate hell highway.

The UN Secretary General said parties must act on the crucial question of finance, and that it means delivering $100 billion in climate finance for developing countries.

Also, he said it means clarity on how the doubling of adaptation finance will be delivered through a credible roadmap.

“They must provide the support developing countries need to embark on a renewable energy and climate-resilient pathway,” he added.

He said: “We have agreed on solutions in front of us – to respond to loss and damage, to close the emissions gap, and to deliver on finance. The climate clock is ticking, and trust keeps eroding.

“The parties at COP27 have a chance to make a difference – here and now. I urge them to act — and act quickly,” Mr Guterres said.

Why I hired friends to kill my stepmother – Suspect